Comedy fan and lawyer Caryma Sa'd is launching a new, reefer-friendly open-air venue in Chinatown for live comedy during the pandemic 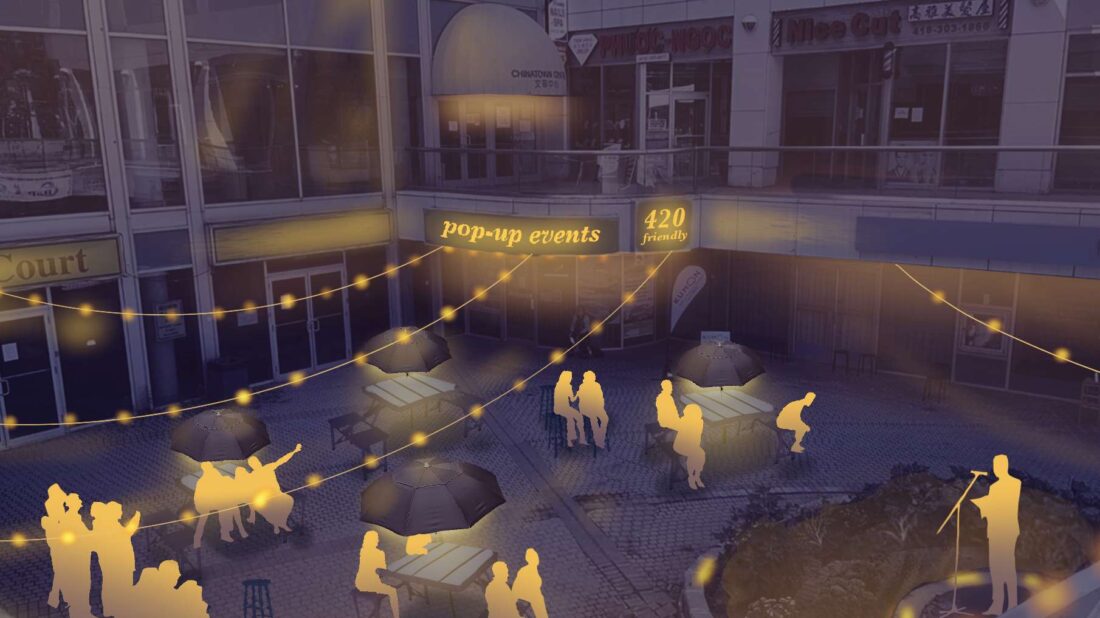 Illustration of comic and artist layout at 420 Cannabis Court shows.

You still can’t see live comedy indoors because of the COVID-19 pandemic. But thanks to some enterprising folks, you can at least get some laughs outdoors this summer. Ben Bankas’s Freedom Of Comedy show continues at Christie Pits every Friday. And starting July 31, a cannabis-friendly show called 420 Cannabis Court is going to be in session.

“It’s been a really rough couple of months for the city, and we’re going to be cooped up again in the winter soon,” says producer Caryma Sa’d. “While we have nice weather and this outdoor venue, we want to take advantage of that and have a good time.”

Sa’d, a trailblazing lawyer, was a big fan of comedy nights like Hotbox and Vapor Central. After all live performances were cancelled, she felt “a gaping hole in my heart.”

She was also concerned for the stand-up comics who suddenly didn’t have any venues to perform at and were now unemployed.

So when she and partner Leslie Bellack found a shop for rent on Spadina – one adjacent to a spacious below-ground level courtyard – they had a light-bulb moment.

Earlier this week on social media, she put out a call to aspiring comics asking for applications. “Everyone could use a good laugh amid the ongoing apocalypse,” the call read. “Looking for comics who can carry a 15-20 minute set. BIPOC, LGBTQ2IA, and/or disabled candidates are strongly encouraged to apply.”

She also noted that it was a paid gig.

Response has been amazing. They’ve received more than 55 applications. The deadline is Saturday (July 25) at noon, so they expect more.

“We already have plenty of talent to have a bunch of stacked shows throughout August, and then we’ll see how the weather – and COVID-19 – develops,” says Sa’d.

In a mock-up illustration of the show’s set-up, there are clusters of patrons watching the show. There’s a capacity for 100-125 patrons, if people use the areas above the courtyard.

“We will ensure adequate space and distancing so no one is at risk,” she says.

Masks will be encouraged, although she says that may be difficult if you’re smoking pot.

“If someone’s not wearing a mask, the expectation is that they stay in their own space,” she says. “There won’t be tolerance for getting in someone else’s face or being disrespectful in that way. The number one rule is be cool.”

“We’re so tired of dick jokes, and they always crop up no matter who the comic is,” says Sa’d. “So we’re going to have a little water gun and will mete out punishment if you tell a dick joke.”

Every Friday will be a showcase night featuring comics delivering 20-minute sets. Saturdays will be battle-style shows, with comics squaring off against each other. The venue is also be available to comics wanting to rent the space for their own live comedy shows during the pandemic.

Two microphones are available for artists; after one has been used, it will be sanitized while the other is being used.

Admission is $10 and each audience member will be issued a wristband. (There’s also the option to live stream the event for $5.) They’re not licensed for alcohol.

The venue is wheelchair accessible through an elevator in the adjoining mall, and Sa’d and Bellack are looking at building a separate platform for the stage, since the current ramp is too steep.