NOW MagazineNewsLooking beyond the auto

Looking beyond the auto

We drink bailout Kool-Aid, but in Motor City they’re on the new economy life watch 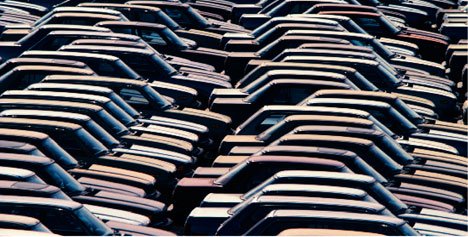 Time to pull up parking lots for farmland paradises.

Detroit – I was in Motown speaking at a city council meeting the day Detroit auto execs jetted into Washington to ask for the big bailout and were shown the door.

But the mood in Motor City was anything but death watch. The city that’s become an icon for the best and worst days of the auto biz is getting ready to move on. They’re on a new economy life watch down here.

If Detroit has the gumption for that, why should anyone across North America drink the auto-?bailout Kool-?aid and throw money at the most mismanaged sector of one of the most eco-?destructive industries?

By my observations, Detroit has the stuff to remake itself. In the first place, it’s got religion in a way few Canadians would recognize. JoAnn Watson, presiding over this council meeting while the former mayor does time in the Big Garage for perjuring himself during a court hearing, carries herself like a political version of Oprah, with plenty of uplift and hope.

She opens the day by celebrating an honour roll of elementary school students – all African American, as are almost 90 per cent of the people in the city – and tells them that the spirit of Detroit will carry them forward, just like it says in the Bible.

This is the old social gospel, not the evangelism of the sanctimonious few filled with fire and brimstone, especially against those who are different or down on their luck.

The tone Watson sets encourages one elderly woman in the crowd to stand up and say a three-?minute prayer naming all the city councillors and staff working to renew Detroit who deserve to be blessed by God.

My labour history training helps me accept this. Woody Guthrie’s union anthem that rocked Detroit 60 years ago – “You gotta go down that lonesome valley and join the union for yourself nobody else can do it for you” – was itself taken from a hymn.

Detroit has been down so long that almost anything can look like up. A city of 2 million in the heyday of the auto industry in the 1950s, it’s been in reverse so long that its current population is only 800,000, one-?third of whom live below the poverty line.

There are no chain supermarkets in Detroit, a city that economic historian Niall Ferguson calls “the developing country within the United States, otherwise known as Subprima,” in his new book, The Ascent Of Money.

City leaders have had a while to look beyond auto fantasies and value other assets of the city, and to think about how to leverage its historic buildings (many available at low rent for innovators, artists, refugees and immigrants), galleries and museums (anchors of ?tourism), intense music scene (a possible welcome mat for new creative industries) and empty lots.

Empty lots. There are 103,000 of them in Detroit, 60,000 of which are owned by the city. This is the unused land base identified by one of Detroit’s secrets of successful revival – the Detroit Black Community Food Security Network.

The group is a coalition of 50 orgs chaired by school principal Malik Yakini, who’s asked Anan Lololi of Toronto’s AfriCan Food Basket and me to address city council.

The gist of my remarks are that food is a recession-?proof job-?creation magnet – most people continue to eat no matter what – capable of reviving cities that once relied on heavy industries.

The key is the food biz’s multi?plier effect. This gets triggered once cities practise “import substitution” by producing locally instead of importing. Job creation magic happens when a farmer with a new income stream upgrades the barn and pays the builders, who then take their families to dinner, where waiters get money to pay their taxes, which help cover the salaries of teachers, and so on.

This kind of economic ricochet romance can create $3 to $5 of job growth for every dollar spent on food, which has more multipliers than almost any other product. Import substitution can be kicked-?started by public purchasing policies and by encouraging more production of culturally ?appropriate foods that are needlessly imported – sheep and goat meat, for example, or callaloo popular in Jamaican soups.

In a city with as much newly-available farmland as Detroit, local food production can be an urban job bonanza. So can compost, the wastes from food. As I explain how compost tea bags can sell for as much as $2, the councillors look at me aghast.

“I gotta stop you there,” one says. “What do you mean by compost tea?”

“You soak the bag in water and put it on the lawn or garden,” I say.

“Oh,” she says, relieved that it wasn’t a New Age beverage.

Then there’s the employment generated when a lively food habitat attracts the “creatives” who will drive the next economy with their intellectual energy, instead of relying on the fossil fuel energy required by yesterday’s industries.

Detroit is launching a food policy council designed to tap into just such a strategy, which I call “pulling yourself up by your foodstraps.”

This is where public money designed to stimulate job creation should go, not to industries like finance speculation or auto, which should live and die by the market since they generate little public value.

Though cars can doubtless be less toxic than they are now, they can never be the base of a clean and green economy. That’s because pollution caused by driving is only one small part of its automatic ecological damage.

Private vehicles eat up space, about one-third of most cities, and mostly prime agricultural land. Car infrastructure is directly or indirectly responsible for most of the obesity and sloth that make health care so unsustainably expensive.

And any way you motor it, two-?thirds of a car’s energy is used to propel the car, not the passengers – a ratio that dooms the private auto to marginality in the future.

Leaving these demerits aside, the North American auto industry is too far behind in thinking, design, tools, management skills, workforce training and labour relations to ever stand up to global competition.

All this means that this business is going nowhere fast. The sooner it’s traded in for food, the better.