These legal party pills with cute names pack a punch and come right to your door. But are they, as online pushers claim, a safer alternative to club drugs? 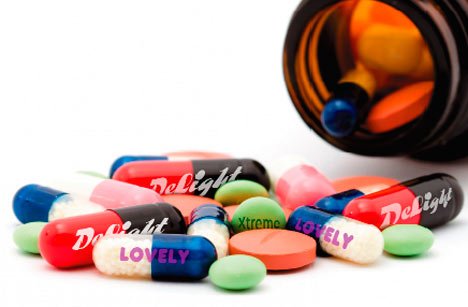 Back in the day, if you wanted to get high, you had to walk down to the arcade to score from some guy in a Metallica T-shirt.

But modern technology and legal loopholes have forever changed that buyer-dealer relationship.

Why waste time waiting for the Man when, with a click of the mouse, you can order 100 per cent legal club-drug alternatives and have the package delivered to your door by mail just in time for the weekend?

I knew the envelope in my mailbox was filled with drugs. A week earlier, I’d contacted a Canadian supplier to express interest in their product.

The company offered to send free samples, and soon a half-dozen multicoloured packages with cute names such as Xtreme, Diamonds, Fantasy and Lovely sat on my friend Dre’s kitchen table amidst overflowing ashtrays and discarded pizza crusts.

Dre, a musician and music producer, is one of those open-minded guys you can trust to swallow a drug of dubious origins without asking questions.

Hours after popping two caps, he was wide awake, in love with the world and sweating like a salesman.

“It’s hard to believe that this shit is legal,” he said.

On the street they’re commonly referred to as “party pills,” “legal E” and “herbal highs.”

While most contain a pinch of common herbal supplements like ginger, these so-called party pills get their kick from the synthetic derivatives of black pepper used in over-the-counter antihistamines and prescription drugs like Viagra.

Taken on their own, BZP (Benzylpiperazine) and TFMPP (Trifluoromethylphenylpiperazine) produce a feeling of alertness and well-being and increases the user’s heart rate. TFMPP can produce mild hallucinations.

Mix the right amount of the two and, bang, you get a buzz similar to the rush of Ecstasy.

Up until recently, the federal government has had a laid-back approach to BZP and its derivatives, which are recognized as drugs but not controlled substances, as they are in the United States, Australia, New Zealand, Ireland and elsewhere.

Here, the pills are widely available online and in head shops. But that could change after a 55-year-old man died in Toronto after allegedly taking party pills.

Ministry spokesperson David Thomas responds via email that “Health Canada is currently assessing whether BZP, TFMPP and other piperazine derivatives that have no known therapeutic or industrial use should be added to one of the schedules of the Controlled Drugs And Substances Act.”

While Health Canada has so far stopped short of regulating the substances, it has seized inventory from distributors and issued public warnings that party pills may not be as safe as some suppliers claim.

Thomas says that the products “may pose serious health risks,” including hallucinations, convulsions and slowed breathing.

Adam Wookey, president of a leading Canadian distributor of party pills, thinks criminalizing the substances would do more harm than good.

He says his products are a safer alternative to illicit club drugs and is pushing for Health Canada to establish industry-wide dosage and age restrictions for recreational drug products like party pills.

Until then, he self-regulates. His company won’t sell the pills to minors, and each package comes with a recommended dosage and warning not to combine them with prescription medicines or illicit drugs.

“These pills have been around for more than 10 years,” says Wookey, pointing out that some 20 million have been consumed in New Zealand alone, “resulting in no deaths and no lasting injuries.”

Jean-Sébastien Fallu, founder of GRIP, a Montreal-based community group that provides counselling and drug usage information at raves, says, “One of the main problems with illegal drugs is that you don’t know what is in the compound.”

In that sense, party pills may be a slightly safer, if not completely safe, alternative.

Wende Wood, resident psychiatric pharmacist at Toronto’s Centre for Addiction and Mental Health argues that since the drugs are not regulated and therefore not subject to quality control, consumers shouldn’t assume that they’re potentially less harmful than street drugs.

Wood, a “huge proponent” of harm reduction strategies like needle exchange programs, disputes Wookey’s claim that the sale of legal club drug alternatives is a step in the direction of harm reduction.

“I find it offensive that this guy is using that term,” she says. “In fact, I think he is doing a disservice to the [harm reduction] cause.”

Considering that after tobacco, alcohol is the substance that causes the greatest harm to Canadians, it could be argued that public safety is only one factor that informs the decision to criminalize a substance.

“We draw a line between legal and illegal drugs, but that line isn’t always premised on danger to public health,” says Neil Boyd, professor of criminology at Simon Fraser University. Check the reefer madness marijuana laws.

While he doesn’t see the logic in treating those using and possessing drugs like criminals, he pushes the need for regulations, not unlike those in place for alcohol and tobacco, to govern the use of recreational drugs.

“You can’t just set up a stall in your backyard and sell alcohol,” he says. “Each drug is different, and each requires a different regulatory strategy. The question is, what is the appropriate strategy for that particular drug?”

Dickinson’s not convinced that party pills are safer or less addictive than street drugs like MDMA, but he believes the current legal status might benefit at-risk teens.

“There seems to be an urge in our culture to have these types of experiences. Some people describe it as a right of passage. It is harm reduction in the sense that kids aren’t going to go to jail for using BZP,” Dickinson says.

Ultimately, education is the best policy when it comes to harm reduction, says Boyd.

“We will have a significant problem if young people think that these drugs don’t have any risks because they’re legal,” he says. “With all drugs, the key is to make people aware of the risks and consequences of usage.”

“We are trying to create a legal market,” he says. “We need a regulatory body and supportive legislation. We can prove that the product is safe.”