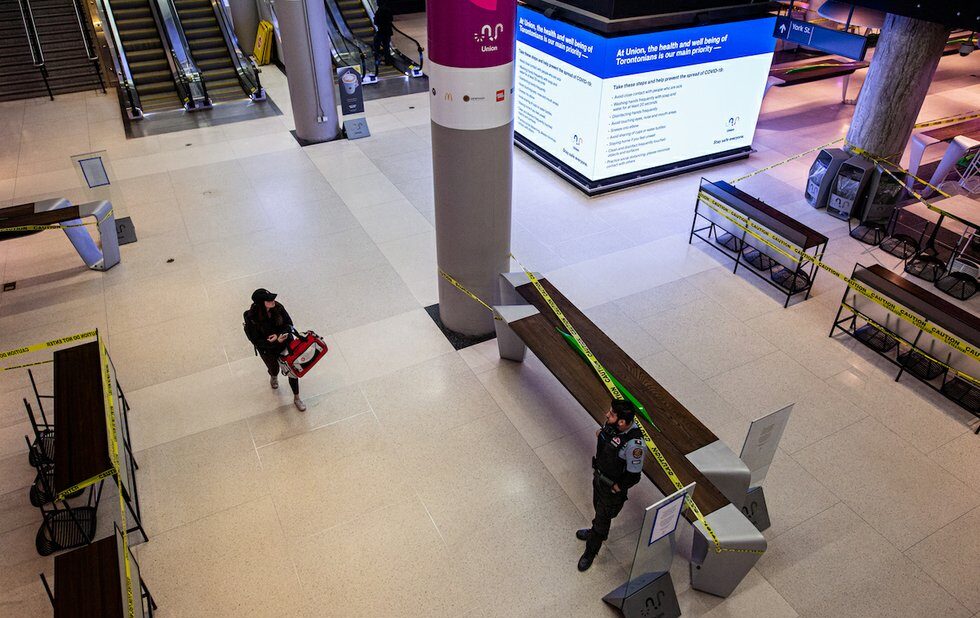 The city has suspended in-person services at its central intake referral service for homeless people in need of shelter beds. The Peter Street assessment centre is no longer accepting walk-ins, the city’s 311 Twitter account confirmed. People in need of emergency shelter are being asked to call instead. Frontline workers were caught off guard by the news.

“None of us working in the field saw this coming or were advised,” street nurse and activist Cathy Crowe tweeted. “Now what?”

Loblaw CEO Galen Weston has announced that Shoppers Drug Mart will be reducing hours at its stores, effective immediately, “to allow our colleagues time for extra sanitation and a bit of rest.” as well as limiting how many people can shop at once in some busier stores. (Check online for your local store’s revised hours.)

Additionally, he said, supermarkets under the Loblaw banner would have their hours limited to 7 am to 8 pm daily, with the first hour dedicated to seniors and those with disabilities. Further measures would be put into place to avoid contact, including limiting customer numbers, getting rid of bulk bins and sampling and waiving the fee for plastic bags at checkout.

Read his full message here. For more info on what’s still open in Toronto and when, go here.

In the city’s daily afternoon public briefing, Toronto’s chief medical officer Dr. Eileen de Villa confirmed that as of 1 pm on Thursday, there are now 128 confirmed cases of COVID-19 in Toronto and 11 of those people are currently hospitalized. In the province, a total of 22 people are hospitalized.

De Villa also stressed the importance of non-essential businesses to close, including hair and nail salons and clothing shops. On Tuesday, the province declared a state of emergency and in effect closed restaurants, bars, theatres and concert venues.

The Ontario government is limiting in-person proceedings in courts and tribunals across the province.

It announced today that all courts are making use of audio and video conferencing “to hear priority matters remotely, where possible.” Those cases that can’t be heard are being adjourned until further notice.

The government says that judges and justices of the peace continue to prioritize criminal and child protection proceedings.

The proceedings affected include hearings before the Local Planning Appeal Tribunal, Landlord and Tenant Board and Human Rights Tribunal of Ontario. Small Claims Court proceedings are suspended until further notice.

The Superior Court of Justice, meanwhile, has suspended hearing all but the most urgent cases. The Court of Appeal has suspended all appeals until April 3.

The Hotel Association of Canada warned today that the hotel industry “has completely crashed over the past 10 days” as the country closes its borders to most international travel prepares to shut down all non-essential traffic between Canada and the U.S. later this week.

The national occupancy average has fallen under 10 per cent, with hotels closing all over the country, the association reports.

The group predicts the majority of the industry will face closures before the end of the pandemic, with an estimated 200,000 to 250,000 jobs lost.

“Our primary concern is for our employees and our hotel owners – many of whom are small, family run operators,” the statement continues. “They need access to liquidity and flexibility from financial institutions in order to stay afloat.”

Halton Region Public Health has reported Ontario’s second death related to COVID-19. The individual, a man in his 50s, had an underlying health condition. He was being treated at Oakville Trafalgar Memorial Hospital and Milton District Hospital.

“This is the tragic proof that we need to work together as a community to help stop the spread of COVID-19 by practicing social distancing and taking action to protect yourself and those around you,” said Dr. Hamidah Meghani, Halton’s medical officer of health, in a statement. “This is a larger community issue and I know that everyone joins me in extending their deepest condolences to his family at this time.”

Cirque du Soleil Entertainment Group has announced “significant temporary staff reductions” that impact 95 per cent of the company’s workforce – or 4,679 employees. The lay-offs are effective immediately.

The Montreal-headquartered live entertainment producer said in a statement that the move is necessary to “stabilize the company for the future.”

Cirque shut down 44 global shows after the World Health Organization declared the coronavirus outbreak a pandemic. Since then, many cities in which the company operates have banned large public gatherings.

“We’re deeply saddened by the dramatic measures taken today, as the temporary lay-off includes many hardworking, dedicated people,” president and CEO Daniel Lamarre said in a statement. “Unfortunately, this decision is our only option as we are forced to position ourselves to weather this storm and prepare for eventual re-openings.”

The company is taking steps to support laid-off staff, including paid vacation time, maintaining insurance coverage during the temporary period and maintaining access to the Group’s employee support program.

A core team remains in place to continue basic operations and plan shows for later this year and 2021.

The federal government is doubling down on research efforts around coronavirus.

The latest funding will cover projects on everything from identifying biomarkers that can predict the severity of the disease, the potential effects of the virus on children and the development of “point-of-care” diagnostics tests to protect health care workers.

The premier announced today that all eviction orders in Ontario will be suspended until further notice, confirming a statement from the province’s attorney general Doug Downey earlier this week.

Doug Ford added that the province is suspending all renewals for driver licenses, plate stickers and health cards. Expired and expiring health cards will be valid to access health services.

Ford also stressed that shoppers should not be hoarding groceries or other items like toilet paper.

“The last county in the world that should worry about toilet paper is Canada. We have more pulp than pretty much any country,” he said. ” Again, I’m begging the people, please do not hoard the toilet paper.”

A man in his 80s from Durham was listed as hospitalized. Most patients were listed as self-isolation but the status for many others were listed as “pending.” Of today’s new cases, 16 are related to travel.

There are 3,972 cases being investigated, 12,421 tests have come back negative, five are listed as resolved and there has been one death.

Yesterday, Trudeau announced that the border would be closed to non-essential travel to curtail the spread of COVID-19. The details of what would be considered “essential travel” still needs to be announced, but any travel for recreation or tourism would be prohibited.

The province’s liquor stores will be operating on reduced hours as of today. All LCBO stores across the province will now be open from 11 am to 6 pm.

The LCBO will also be limiting the number of people in stores during those hours. There will also be fewer cash registers open during store hours and shops arel not be accepting returns. Customers should bring and pack their own reusable bags and pay using a debit or credit card.

In-store tastings have been suspended for the time being. Some home delivery of purchases will continue but the LCBO says it can’t confirm delivery dates since Canada Post has suspended delivery of packages requiring proof of age.

The TTC has confirmed that an employee – not a front-line worker – has tested positive for COVID-19. The employee works in the Duncan Shop, which handles bus rebuilds and overhauls.

The employee returned to work on March 11 from travel and worked one shift. Around 130-170 employees are now in self-isolation. They will return to work on March 25 or 26 if they have no symptoms.

The latest in a long line of Toronto events to cancel due to the coronavirus pandemic is Toronto Comic Arts Festival (TCAF), a massive annual event geared toward indie comic artists, graphic novelists and zinemakers that draws artists from all over the world. This year’s fest was set to take place at the Toronto Reference Library May 8-10.

Organizers said they made the decision to cancel the event due to feedback from partners, sponsors and venues, as well as the ongoing nature of travel restrictions and quarantine measures.

“We want to say to the entire comics community: We tried very hard to make this work, as we’re very aware of the financial and career necessity that TCAF has become for many working comic authors. At present, cancellation is the only ethical option,” they wrote, adding all exhibitors would receive refunds for tables.