NOW MagazineNewsOn the record: Facebook, Twitter and the death of democracy in the era of fake news 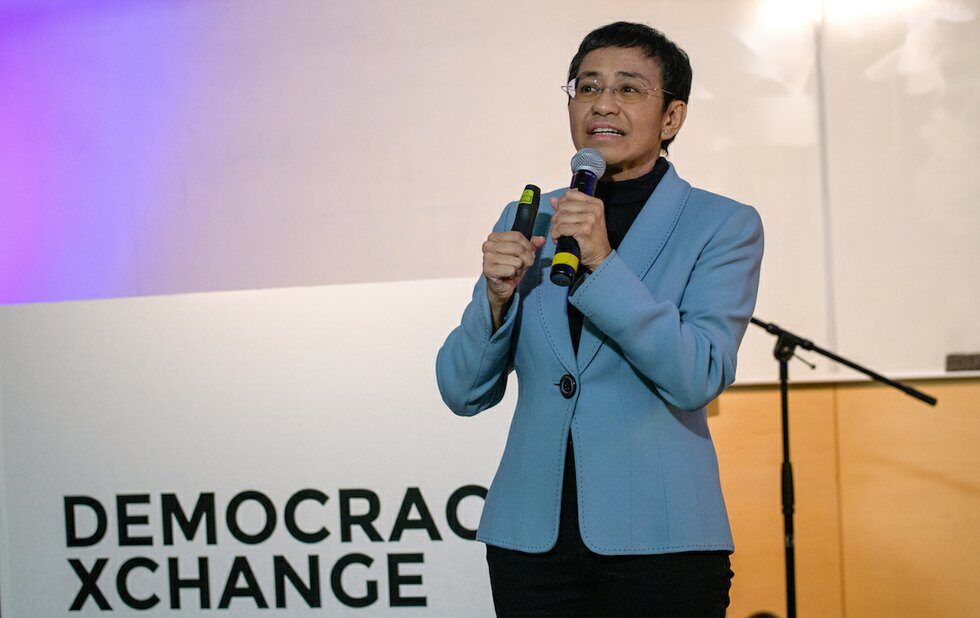 Maria Ressa, one of four journalists named Time Magazine’s 2018 Person of the Year, is CEO and Executive Editor of Rappler.com. The website she started six years ago has been chronicling the violent drug war and extrajudicial killings of the regime of Philippine President Rodrigo Duterte, which has led to the government filing tax evasion and fraud charges against Ressa. The former CNN correspondent delivered a keynote address at the Democracy XChange Summit in Toronto on January 27. What follows is an edited and condensed version of her presentation.

This is an existential moment for global democracy. We shouldn’t be complacent and think that democracy is safe. Everything can turn just like that.

When the information ecosystem is toxic, when it is manipulated, when it is full of sludge, that has an impact.

You guys are having your [federal] elections very soon. You should not think you’re immune. I did. I thought the Philippines was immune. Certainly, we didn’t think things were going to go so wrong so quickly in the United States.

In fact, right before we had our elections, someone asked me if dictatorship would ever come back to the Philippines. I laughed. I didn’t realize the power of social media.

But shortly after Instant Articles were introduced by Facebook at the end of 2015 you had the election of Duterte in the Philippines and a month later you had Brexit.

I went to Singapore to talk to Facebook with data showing them that something very bad was going on. I was like, “Guys, please do something about this. You have elections coming up in the U.S. Trump could win.” We laughed. We really did.

When Trump did win, Facebook came back and asked me for the data again. We documented how 26 fake accounts on Facebook influenced 3 million other users. We waited a month or so before we came out with a series of stories because I naively thought they were going to fix it and give me a statement.

Overnight I began to get attacked in a way that I never thought was possible.

At the beginning I responded. But they didn’t really want a response. The end goal of these attacks is to pound you into silence. I was receiving 90 hate messages per hour.

I was like, “OK. This is a new tool, a new weapon against journalists. It’s psychological warfare.”

Why the Philippines? We’re like a petri dish for social media. In 2017, we were number one in the number of hours spent on social media, about four hours a day. Where are you, Canada? An hour and 48 minutes.

By the time Mark Zuckerberg was called to testify before Congress and they were finding out about Facebook’s tactics, I thought, if only we had known, we might have been able to survive it. I almost threw a shoe at my computer.

There’s a global phenomenon we’ve seen. It’s called “patriotic trolling,” which are online hate campaigns to silence and intimidate. The end goal here is not to censor. It is to flood the market with so many lies that you can’t tell what the truth is. When you cripple faith in institutions and the pillars democracy would normally have, the minute people begin to doubt, you’ve just gotten a crack in democracy because the voice with the loudest megaphone wins.

In my case, it’s president Duterte.

Every charge that has been filed against us by the government started with a social media campaign. In May 2017, I panicked a little bit because the hashtag #arrest started trending on social media.

Rappler.com had gotten the transcript of the conversation between Trump and Duterte. We published it. A pro-Duterte blogger wrote something that would normally be considered laughable – that Rappler.com had made the Philippines a target of North Korea nuclear missiles by releasing the transcript. It’s funny [but] not many people were laughing.

From there, the hashtag #arrest and calls for me to testify before the Senate started trending on Twitter. I could smell arrest and possibly the closure of Rappler. Then on Rappler’s Facebook page, this gets posted: “To the government, make sure she gets publicly raped to death. It would bring joy in my heart.”

Standing quiet in times like this doesn’t work. You know that phrase silence is consent? That is how these exponential attacks work.

In January, 2018, one survey found that 86 per cent of Filipinos believe traditional media are “fair and accurate.” The same month, a survey on social media by the Philippine Trust Index had the complete opposite results – 83 per cent distrust traditional media. How is it possible that in the real world you trust, and on social media you distrust?

We dug through the data and the timeline of attacks on media from January 2015 all the way to April 2017. Two words come up most: corrupt and bias. It’s the same tactic used in the United States: you take a fracture line and pound those fracture lines to manipulate people to anger.

It’s a shark tank – sites spreading fake news and Facebook pages spreading these sites. It’s basically cut and paste – the same message cut and pasted by networks on websites and then shared dozens of times through Facebook. These go viral and then enter the mainstream.

This misinformation works like cocaine. If you sniff once or twice, it may not change your life. If you use it every day, it will make you an addict. That’s what disinformation does. It’s like the movie Inception – going into the dream world to change the real world. The power of social media is insane. I don’t think we knew it or Facebook knew it. They’re just figuring it out.

Following her keynote address, Maria Ressa was interviewed by CTV anchor Lisa LaFlamme. Here are some of the highlights of their conversation.

Lisa LaFlamme I don’t think anyone here is under the misconception that this hate doesn’t also exist in Canada against marginalized communities. Eight months before a federal election, how can people call it out?

Maria Ressa We found communities that keep track of the sites that were spreading fake news on Facebook or Twitter and then we went to them. They (Twitter and Facebook) didn’t take any action. The network they took down three weeks ago, we reported on that 13 months earlier. Imagine the damage that could have been prevented. So how do you do it? You push Facebook, Twitter, YouTube. You push them to actually take on the role of gatekeepers. “Clean it up or we will call you out.”

LL When Mark Zuckerberg was in front of Congress’s intelligence committee in Washington, clearly they didn’t know what to ask him. They were so behind and I think media literacy is the key to this. Just this week, the New York Times called Twitter the most dangerous social media platform in the world. What is your reaction to that?

MR WhatsApp [which is owned by Facebook] was [also] extremely dangerous. You had false information on WhatsApp contributing to the spread of hate speech and ethnic violence in Myanmar.

LL WhatsApp is planning on limiting the number of people you can share messages with. Do you think that’s going to make a difference?

MR It’s hard to tell. If you think about democracy as a human body, what courses through our veins is blood with oxygen that gives us what we need [to survive]. But imagine that oxygen being pumped full of toxic sludge. The discussions we have stem from the information we get. If you’re being manipulated and you’re being goaded, it’s hard to be nice all the time. It doesn’t work!

LL I’m guessing you didn’t get a congratulatory note from Duterte when you were named among those chosen for Time’s Person of the Year?

MR Somebody did ask him at a press conference. He dismissed it. Which is better than the alternative. I found out about the award on Twitter…

LL Did you think it was fake news?

MR You know, I really did! It was a very strange day. I posted bail four times that day. So in the morning I was in court. In the afternoon, I was sitting down with our team to figure out if I needed more security. We’ve increased security in the office because I have young reporters.

But that night, it was 6:30 and I was having dinner and the first thing I did when I saw it was like: “Oh, my god. I’m the only one of the people selected who is free and alive. Is this what our future is like and is this what I’m looking forward to?”

Well, no. I think it’s a good thing. I’m holding my government responsible for my safety.

LL That’s a very good point. Almost a year and a half before Donald Trump stood up at a microphone and called the media the enemy of the people, he is still the occupant of the Oval Office. What do you see as the impact of that globally?

MR When President Trump called CNN and The New York Times fake news, a week later Duterte called Rappler fake news. So without guiding principles, without a moral beacon, without pressure from outside, it is open season on us.

LL You’ve become the Al Capone of the Philippines with all these tax evasion charges. How do you even park this in your head? You’re heading home in the next few days, and when you see the plane coming down over Manila and you think: Alright, I’m going to have to go through customs, what goes through your mind mechanically?

MR It’s actually so much easier now than at the beginning. Now it’s the new normal. I no longer have an arrest warrant until the next one, right? Now it’s not knowing whether they will break into your apartment and arrest you, because they don’t have to have an arrest warrant. So that part is harder. I’m optimistic. I think we can still win the battle.

LL I know there are people who have questions, so I’m going to ask one more before we open the floor. There’s this perception that this [online social media campaigns] come from the right. What is your opinion on that?