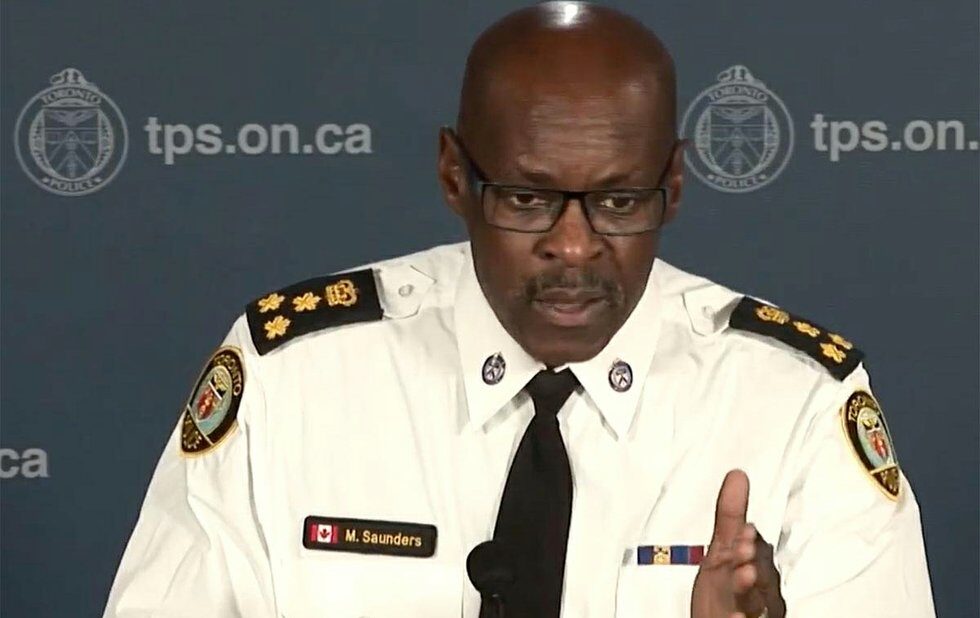 As press conferences go, Thursday afternoon’s would have to rank as one of the more emotional in Mark Saunders’s tenure so far as Toronto police chief.

The unpredictable chain of events surrounding the police custody death of Regis Korchinski-Paquet on May 27 – and the ripple effects being felt around the globe from the riots stateside over the death of George Floyd at the hands of four officers – has put Toronto police and their relationship with Black communities in the city under a microscope.

And as a chief of police who also happens to be Black, Saunders finds himself caught in the middle of the racially charged fallout.

The expectation was that the chief would be speaking Thursday about more protests planned over Korchinski-Paquet’s death this weekend. Some downtown businesses have begun boarding up their stores in anticipation that the planned demonstrations won’t be as peaceful as last weekend’s. Fuel has been added to the controversy surrounding the circumstances in Korchinski-Paquet’s death after police leaks this week to the Sun on the moments before the 29-year-old woman’s fall from the 24th floor balcony of a High Park apartment.

But Saunders’s opening remarks focused on how now is the time for “major change” in the force and its relationship with racialized communities. And understanding “the lived experience” of Toronto’s communities of colour.

“There are times when we’ve had it wrong,” Saunders said, of the force’s work with those communities, “and they called us out and we’ve listened. We are always continually learning what we have to do. We are not naive about what’s going on.”

At one point during the press conference when he was asked about the angry response to the Floyd death in the U.S., Saunders recalled that public lynchings were still taking place as recently as the 1940s and 50s south of the border.

“I understand it. Anti-Black racism [exists] it’s not words. It’s a reality. When you look at North America’s history you have to lean into it. You have to own it. These types of atrocities have happened. You can figure out what you want to define as recent versus past history. My dad and my mom were alive [so] it’s recent enough for me.”

The message seemed to be directed to the general public, at least those segments that reject that anti-Black racism exists (maybe even some members of the rank and file). 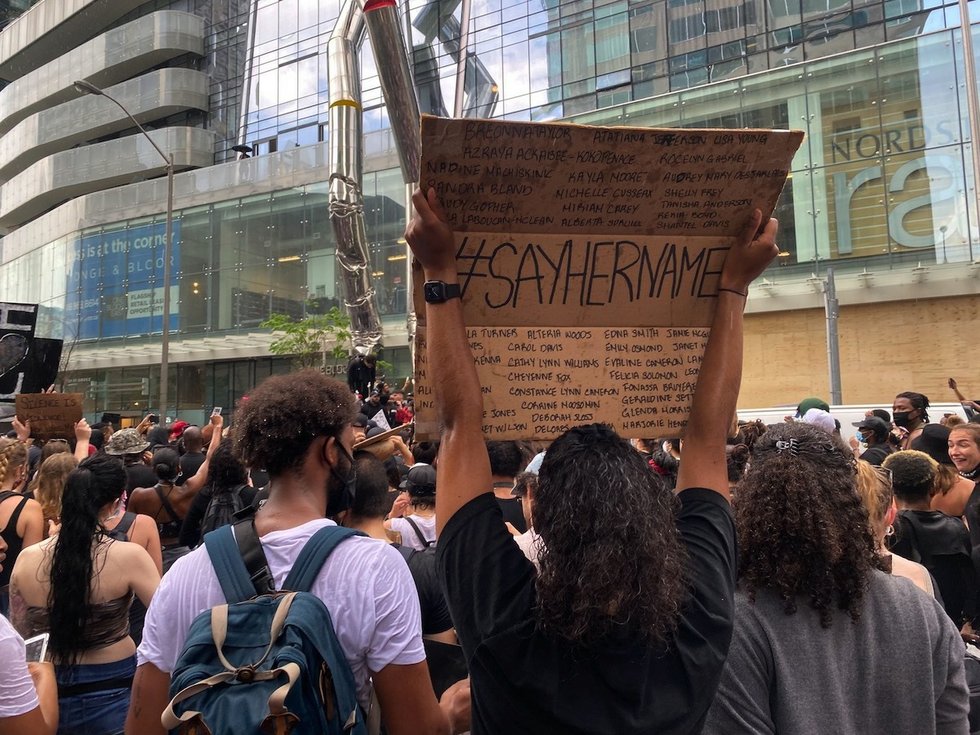 Coincidentally, there was also some online chatter on Thursday that Saunders was forced to address – namely, comments made by a former Toronto police officer that Floyd “was a thief and a fraudster” and that “… ya they should of [sic] just let this criminal continue to plague society.”

The same former officer turns up in NOW’s database in this 2004 story. The officer was on the province’s sunshine list of public servants earning more than $100,000 as recently as 2017. Saunders says he’s no longer on the force. An officer with the same last name also shows up on a use of force report written by Ian Scott, the former director of the province’s Special Investigations Unit (SIU). It notes a charge of an assault with a weapon in 1997 that was ultimately withdrawn.

There’s also been some online traffic on knee-to-neck submission techniques used by officers involved in the Floyd death, which the chief addressed in his opening remarks. “I want to be clear,” the chief said, “this organization does not train to [do] this.”

For Saunders, the heat is coming from all sides.

On the one hand, there are members of his own community demanding a fundamental rethinking of how policing is done in the wake of the Korchinski-Paquet death – the Urban Alliance on Race Relations is now calling for a public inquiry into the broader issues of systemic racism involving interactions between police and people experiencing a mental health crisis. On the other, there’s the powerful police union and a mayor reluctant to do anything to piss them off.

Saunders offered reassuring words on Thursday about rebuilding the “fractured trust” between Toronto police and Black communities. “We are all grieving,” he said.

But despite his stated commitment to “major change,” the chief pushed back on growing calls from policing reformers to redirect money going to the $1 billion-plus police budget to addressing social issues in priority communities hardest hit by guns and gang violence.

The chief talked instead about making a distinction between “costs and value” and the need “to do what’s necessary to keep the city safe. We’re not responsible for the disease but we deal with the symptoms day after day after day.”

The chief made a point of highlighting the 30,000 calls for service related to mental health issues Toronto police respond to every year. And he ventured that, if we’re going to have a discussion about cutting the police budget, then there needs to also be frank talk about how we address high-risk mental health situations. “We need other agencies to help offload those risks.” It’s a fair point.

The overwhelming majority of those calls are not of people experiencing an immediate crisis. The force does have a mobile emergency response team to handle more serious calls involving people experiencing distress. Part of the problem is that the unit isn’t always called when there’s an elevated risk. As a consequence, some of those situations have ended badly.

Saunders also spoke of the need for the use of police body-worn cameras to increase “transparency and accountability” with police in the communities of colour, but there too the police union has resisted implementation. “I have been pushing hard. I want this done now. It will help with building the relationships that are necessary to keep the city safe,” Saunders said.

Some would disagree that the technology will address accountability issues, particularly since discretion about when to turn the cameras on will be left to police officers. There’s also the issue of cost, but Saunders says we won’t know what those are until year’s end.

As for this weekend’s protests, Saunders said he was not going to speculate on reports that groups from outside the city may be coming to disrupt the situation.

He said that he expected Torontonians to conduct themselves peacefully. He can only hope. For Saunders, the situation is tricky enough. On Friday, the chief and a few of his officers were in Nathan Phillips Square where a March for Change event was taking place. The chief took a knee with people present.