After more than three years dark and its biggest renovation in over 100 years, Toronto's most famous venue is back up and running 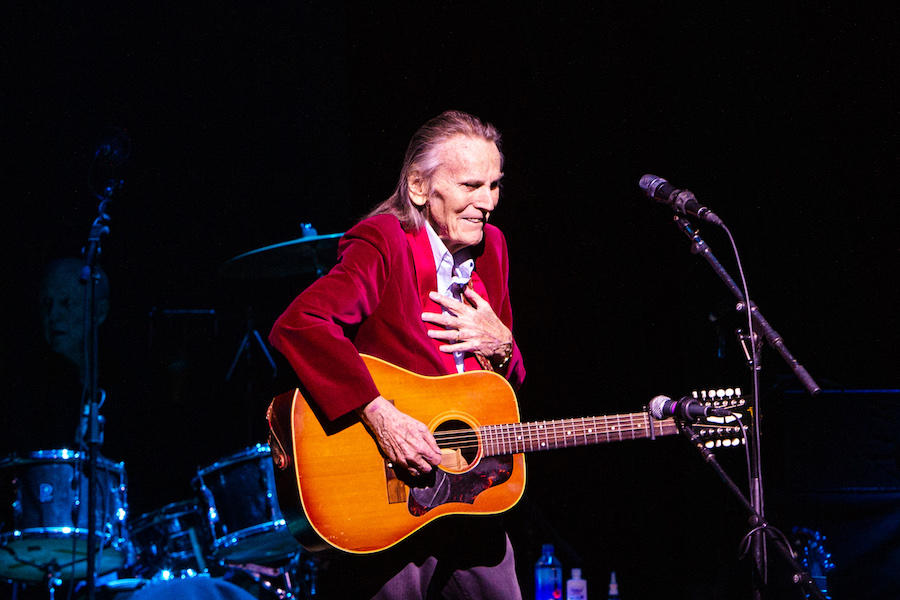 Gordon Lightfoot has played Massey Hall 171 times, but few as momentous as last night. It was the first concert at the hallowed Toronto music hall in more than three years, its longest ever closure – not because of the pandemic, but a massive $184-million renovation. It was also the night Lightfoot received the key to the city.

Mayor John Tory presented the Canadian singer/songwriter with the key before the concert, declaring it Gordon Lightfoot Day in Toronto. Lightfoot talked a bit about how happy he was to be back at Massey Hall and for the much-needed update – there’s finally a proper backstage area – and apologized that he’d be “playing with a broken wing.”

Toronto Mayor John Tory presents Gordon Lightfoot with the key to the city.

He was talking about the steel plate in his arm, a result of the broken wrist he suffered after a fall in his home this summer. Still, after such a long closure and a global pandemic that could have pushed it even longer, everyone in the room was grateful that the 83-year-old icon was available to play Massey Hall’s reopening, just as he played its farewell show in 2018.

Inside the revitalized Massey Hall

It’s also a relief to see Massey Hall is both refreshed and very much the same. In a walkthrough the day before, lead architect Marianne McKenna spoke about the goals of the project – to bring the concert hall into the 21st century without sacrificing any of the character that makes it such a special venue.

Nicole Clark stands on her Jeep to get a photo of the newly relit Massey Hall sign.

The famous acoustics have been studied and preserved – artists can still perform their favourite move of stepping away from the mic for the song, and Lightfoot’s banter with his bandmates was fully audible last night – but it’s also been improved and optimized for amplification, which wasn’t as much of a consideration when it opened in 1894.

The hall is still laid out mostly the same, with three levels of seats allowing between 2,500 and 2,800 fans, but it’s been made much more comfortable. The sightlines are better, with floor seats now curving a little instead of jutting back in straight rows. The seats have gotten some much-needed padding and legroom – people must have been smaller a century ago, and they must have had falling-asleep-resistant butts. But the room still feels intimate, with every (masked) face visible from the stage and other seats.

More importantly than anything else, the venue has improved its accessibility and now offers accessible seating on every level – formerly a major glaring omission from their oft-trotted out quote from founder Hart Massey that the hall was a “gift for the people.” There are also elevators and modernized bathrooms.

The seats are now retractable, sliding under the stage to allow standing-room concerts. That will allow many artists who would have never played Massey Hall to perform there, so get ready for more hip-hop and metal shows. It’s also got a technical upgrade to allow for bigger productions and touring shows with lights and pyro. The stage setup looks more modern, even if it was just a modest, slightly psychedelic swirling light backdrop for Lightfoot.

You still feel the sense of awe walking in, even if the modern touches reduce the feeling of sitting among the ghosts of everyone who performed there. In some ways, though, they made it even more like its original self. The fire escapes have finally unobscured the “Massey Music Hall” inscription on the front of the building after more than a century, and the original stained glass windows have been uncovered after nearly as long. Seeing them on each side of the room makes Massey feel almost churchy, which also brings it back to its early days when it would regularly host religious programming.

To walk in and feel that awe, though, the audience had to get in first. A very punctual opening night audience – one in which many people seemed to have firsthand memories of the Riverboat and Village Corner 60s folk coffee houses when Lightfoot shouted them out – stretched all the way from Shuter Street down Victoria, across Queen and back up on Yonge all the way to the Elgin Theatre. But everyone was let in before Massey Hall CEO Jesse Kumagai declared “in a few minutes, music will be back at Massey Hall.”

After the opening key ceremony and remarks, opener Tom Rush took the stage. The American folkie, a contemporary of Lightfoot at those same 60s coffee houses, played a solo set that had the crowd hanging on his every word. The mustachioed 80-year-old songwriter was the first to cover Joni Mitchell and actually recorded her song Urge For Going before she did in 1967. He played that one and another by Murray McLauchlan, shouting out his CanCon connections.

Those songs were very pretty and stately, but it was his sillier songs that captured the crowd. His talking blues tune Making The Best Of A Bad Situation was structured like an old joke, as was The Remember Song, with punchlines about forgetting his keys, wallet, answering machine code and the angry woman leaving him a breakup message. It was the right mix of stately reverence and light-hearted levity for the occasion and the room.

Lightfoot kept that same energy in his own set, which was packed with all of his best known songs – Sundown, Carefree Highway, Early Morning Rain, If You Could Read My Mind and the epic Wreck Of The Edmund Fitzgerald. Those highlights brought out many people’s cellphones (this will be a very well recorded live set). Dressed in his trademark velvet burgundy smoking jacket, Lightfoot knew he has a routine to hit and he mostly did it. Even if Lightfoot’s voice is noticeably thinner than the rich voice he’s known for, it’s amazing to hear the songs in their most natural environment. His longtime bandmates helped elevate the tunes with jangly guitar licks and jaunty drums.

The audience seemed to want a little more repartee between songs, with many people taking the brief moments of silence to yell variations on “We love you, Gord!” But he kept his banter to a few dedications, including ones to his daughter Ingrid, Mayor Tory, Bernie Fiedler (who ran the aforementioned Riverboat folk club),and astronaut Chris Hadfield, all of whom were in attendance. He also talked about late music philanthropist Allan Slaight, the new namesake of the Massey stage. At one point he did a flip of his long locks, then joked he’d keep playing as long as he has hair.

The renovation is not totally done yet. This revitalized Massey Hall is now part of a much bigger complex called Allied Music Centre that will include two new smaller stages, rehearsal spaces, recording studios and more. That part won’t be open until the new year. But in the meantime, Toronto has one of its most famous venues back up and running.