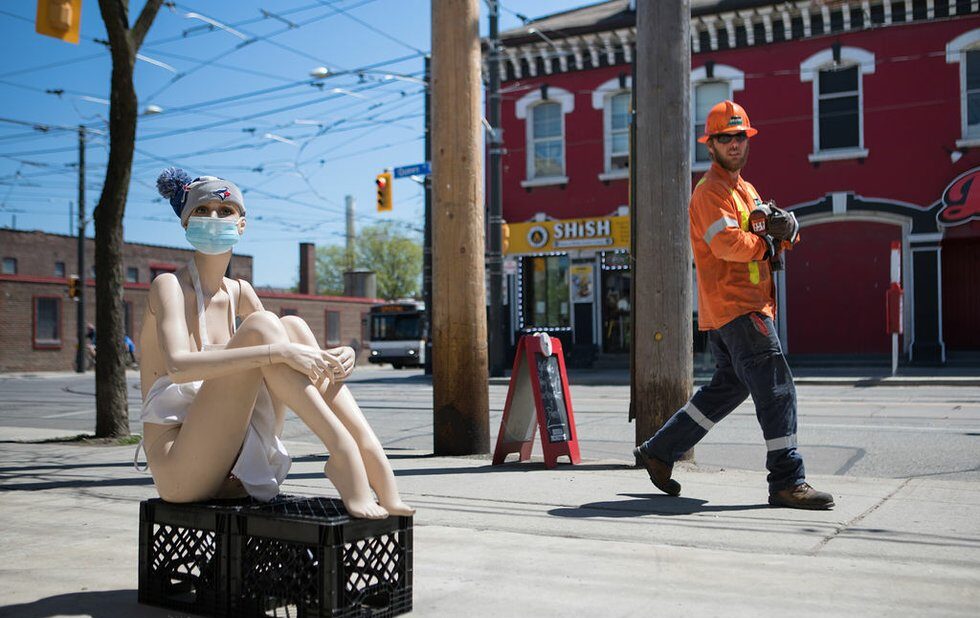 6:30 pm City building a fence around the foxes living under the Beaches boardwalk

Toronto Fire Chief Matthew Pegg, who is heading up Toronto’s emergency response to the coronavirus pandemic, confirmed earlier reports one of the baby foxes living under the Woodbine Beach boardwalk was likely killed by an off-leash dog.

The city is investigating the animal’s death and is now installing higher fencing to protect the family of foxes from members of the public.

Municipal enforcement and Toronto police will now patrol the area to instruct people to keep away from the fox family, particularly at dawn and dusk when the animals are most active. The Ministry of National Resources and Forestry is also involved in protecting the foxes. A lengthy story on the foxes in the New York Times noted that people have been picking up the fox kits and feeding.

6:15 pm Toronto considering a 50 per cent cut to TTC service

At today’s city hall press conference, John Tory outlined a series of service cuts that will have to make unless provincial and federal governments bail the city out. The mayor has said the city is facing a projected financial loss of $1.5 billion-$2.8 billion due the coronavirus pandemic.

As a result, city staff are crunching numbers to determine what would have to be cut to avoid running an operating deficit – which the city is not legally allowed to do.

Tory said Toronto is looking at a potential $575 million cut to the TTC, or a 50 per cent shutdown that would see service on lines one and two cut in half and the Sheppard line and Scarborough RT lines cease operating completely. WheelTrans would be reduced by four million rides – for a savings of $76.3 million – while streetcar and bus service would be reduced so vehicles would arrive every 10 to 20 minutes.

“The days of reckoning are approaching,” Tory said, adding that he doesn’t think property taxes should be increased in order to pay for the shortfall.

6 pm Mother’s Day may have led to increase in COVID-19 cases in Toronto: de Villa

There are now 9,357 cases of COVID-19 in Toronto, an increase of 258 cases since yesterday, medical officer of health Eileen de Villa said today.

She added that the city has seen an increase in local case numbers over the past three days. Toronto Public Health has analyzed the data and officials believe that people may have acquired the virus during Mother’s Day or other family events.

“We need to continue to be careful as we move forward so we don’t find ourselves in a position where we have to go back,” she said during a city hall press conference on Friday.

She asked Torontonians not to gather with others outside their households. “Do not socialize in group settings, especially indoors,” she added.

There are also 411 patients in hospital in Toronto, with 96 in intensive care. The number of resolved cases is 6,998, an increase of 113 cases since the previous report, and a total of 732 people have died from COVID-19.

Ford said both residents and staff who have already been tested with be tested again, as will frontline health-care workers whether or not they are exhibiting symptoms. He added testing will also concentrate around “hot spots” in urban centres such as Toronto.

Trudeau said that Ontario has already asked for help with contact tracing, and Ford confirmed Ottawa made 224 contact tracers available a week ago.

The province has come under fire as daily COVID-19 testing has fallen below capacity while the number of new cases reported daily has stayed about the 400 mark for the past three days.

11:30 pm Ottawa to help provinces with testing and contact tracing

The federal government is going to assist provinces to ramp up COVID-19 testing and contact tracing.

Prime Minister Justin Trudeau said today that Ottawa would help fund efforts to test and track the spread of the virus, and make thousands of federal employees available to do contact tracing calls seven days a week.

“We need to do much more testing,” he said. “That is how we will be able to control the reopening of the economy and control the spread of the virus.”

Trudeau said the government is working to procure reagents (chemicals used in testing) and swabs as well as make 3,600 federal workers and 1,700 Statistics Canada interviewers available to do contact tracing. The employees are already assisting in Ontario and will be available to other provinces if they ask for help.

“We now have the ability to conduct 60,000 tests a day but we are not yet at that point,” he said. “A number of regions do not need to increase the pace of their testing because the situation there is under control. But in other regions we will be there to support providing the necessary materials.”

“When the time comes for that to be released, we will be able to recommend strongly to Canadians a particular app that will help us manage the spread of COVID-19,” he said.

Ontario’s new COVID-19 cases have increased for the third straight day. Public health officials reported a single-day increase of 441, bringing the total number of cases to 24,628.

Testing continues to fall short of the government’s target of 16,000 tests per day. The number of completed tests in the past day was 11,276 and another 5,516 cases are under investigation. The province has failed to hit the target for the past five days.

9:30 am Baby fox found dead in the Beaches after apparent dog attack

The Toronto Wildlife Centre (TWC) is asking people to keep a distance from a family of foxes at Woodbine Beach a baby fox was found dead last weekend.

A volunteer found the fox kit’s carcass during a pre-dawn shift, the organization said in a social media post.

“The wounds suggested the poor kit was killed by a larger predator, and because the body was left there it’s likely an aggressive dog was responsible,” the organization said. “Many owners have been seen letting their dogs charge at the foxes, sniff them or the den they’re hiding in – and most often the dogs are off-leash.”

The foxes, which live under the boardwalk, have become an international media fixture, attracting crowds of onlookers. The TWC is asking people in the Beaches area to keep their distance from the animals and keep their pet dogs on leashes.

TWC added that the baby foxes likely became accustomed to the presence and scent of dogs and lost their fear of their “major predator.”

“Sadly, the innocent lives of the remaining babies may also be lost if dogs are not kept away,” TWC wrote.

9 am York University to shift most courses online this fall

York University is the latest Toronto university to announce most classes will take place online in the fall semester.

The school will offer its full selection of academic programming this fall, with mostly online and remote access. However, for some courses that need experiential instruction, there will also be in-person labs, studios and clinical placements.

“The safety of our community members remains our top priority, and we will continue to work closely with the government and public health authorities to ensure that we are adhering to whatever guidelines are established for any potential on-campus activities,” said York’s president and vice-chancellor, Rhonda L. Lenton, in a press release this week.

9 am Shopify staff to work from home permanently

Canadian e-commerce company Shopify is that latest tech will close its office until at least 2021 – and most staff will continue to work remotely thereafter.

“As of today, Shopify is a digital by default company. We will keep our offices closed until 2021 so that we can rework them for this new reality,” CEO Tobi Lutke said in a statement on Thursday.

“Until recently, work happened in the office. We’ve always had some people remote, but they used the internet as a bridge to the office,” he added. “This will reverse now. The future of the office is to act as an on-ramp to the same digital workplace that you can access from your [work from home] setup.”

The e-commerce company, which has its headquarters in Ottawa, has 5,000 employees working across 16 offices around the world. Last year, they opened their second Toronto office, taking over the top nine floors of a 15-storey building at King and Portland. Read more here.