Shaming racists when the media won’t 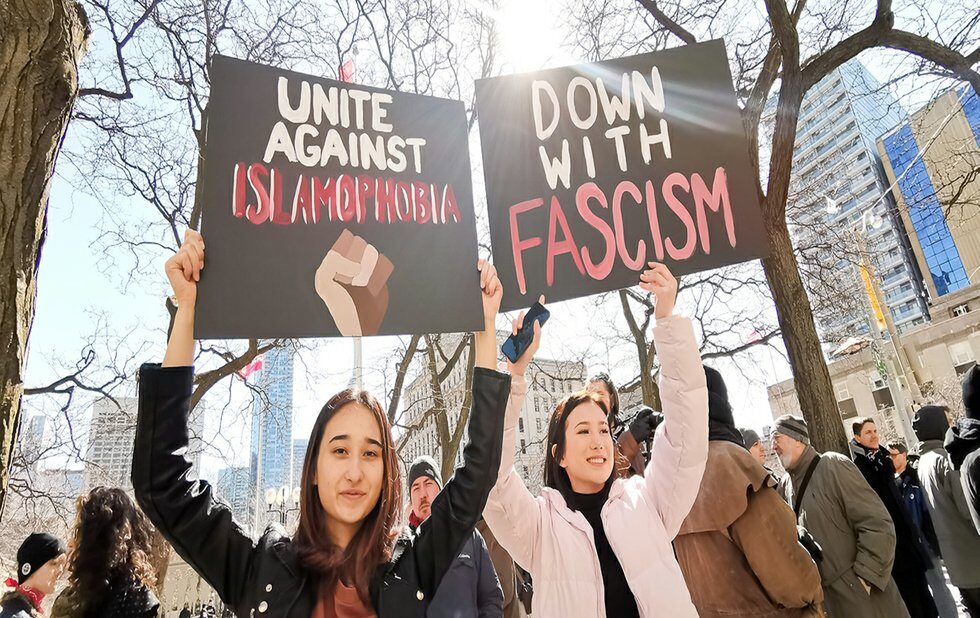 It was a ragtag group of 20-plus demonstrators who showed up for the rally against “Islamism and hate speech” organized by Patriots of Canada Against the Islamization of the West (Pegida Canada) in late March.

The rally was originally slated for Nathan Phillips Square but was moved just outside of it after Mayor John Tory took to Twitter to express his dismay about the “white supremacists planning to demonstrate & disrupt in our city,” and to note that he had alerted Chief Mark Saunders.

Police showed up in full force, in riot gear on bicycles and on horseback, but it was mostly to keep Pegida members separated from the 200 or so counter-demonstrators from Toronto Against Fascism (TAF) – a few of them in masks – who showed up to shout them down. It’s become a familiar tactic of anti-hate groups to show up in large numbers when the far-right rallies in public. “It’s all about reintroducing social consequences – the community is saying it’s unacceptable,” says Evan Balgord, executive director of the Canadian Anti-Hate Network.

It was two days after a vigil in Toronto for the 50 victims of the attack in two mosques at Christchurch, New Zealand, and it didn’t take long for tension and insults to start flying. But it was media covering the event and attempting to get a comment from Pegida organizers that lit the fuse.

Corporate media has a responsibility to not amplify messages agitating violence against people because of their race and or religious background.”

“Do not give them a platform, what is the matter with you?” one of the TAF protestors yelled. Other individuals also began shouting at members of the media to stop. Several police moved in to try to keep order but were quickly surrounded.

Pam Seatle of CityNews was one of two TV reporters confronted.

“A mosque got shot up in New Zealand, a synagogue got shot up in Pittsburgh,” said protestor Jesse Dylan during a heated exchange with Seatle. “You shouldn’t interview white supremacists. That’s not a side you want to put on the evening news.”

Seatle replied, “They have a legitimate point of view. Why are you being aggressive with me?” She continued making her case before walking away. She later posted to Twitter that she “felt more threatened by them [counter-protestors] than any of the so-called ‘dangerous violent racists.’” Seatle deleted the tweet soon after.

But that didn’t stop the backlash after it was pointed out on social media that Seatle’s CityNews colleague Ginella Massa, who wears a hijab, recently had to ask for security to escort her to her car. That was after Peterborough-based neo-Nazi Kevin Goudreau posted a statement on Facebook only days earlier appearing to call for violence against immigrants and journalists. 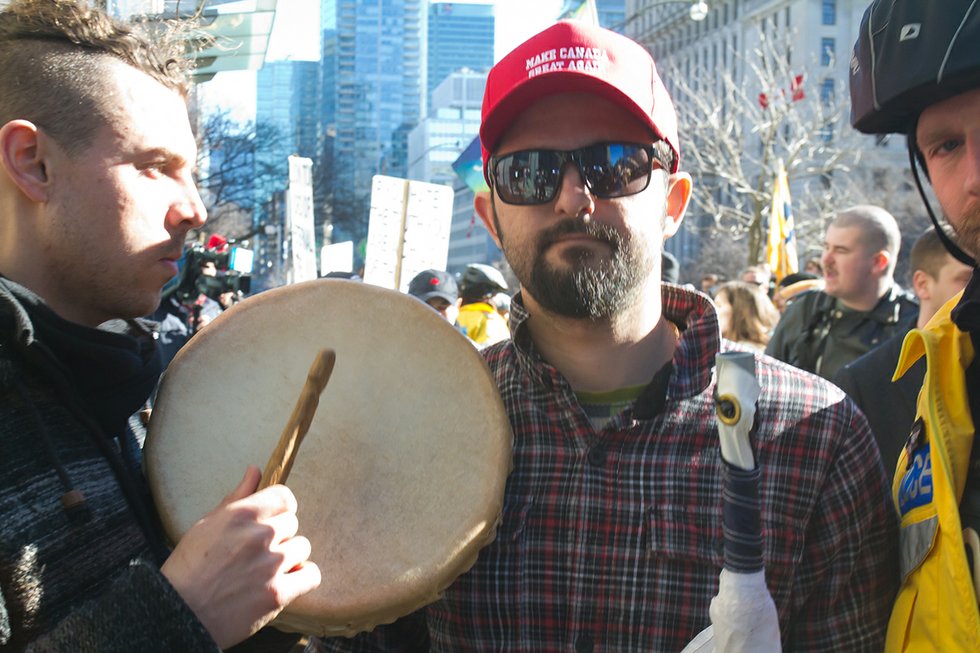 Maclean’s contributing editor Andray Domise weighed in on the controversy and what he called the “moral cowardice” of the Canadian media in general for not calling out racism.

“While Seatle may have had cause to feel unsafe in the moment she was followed by protesters, the fact is, she was covering the march of an organization whose founder, a man who calls refugees ‘cattle’ and filth, was found guilty by a German court for inciting racial hatred,” wrote Domise. “It was not only Seatle’s decision to attend and cover the rally from a rather slanted angle, calling out the protesters’ lack of decorum, but the choice of her news department to approve the segment, if not covering PEGIDA’s rally (and the counter-rally) to begin with.”

Domise’s article goes on to cite numerous other examples where mainstream media has fallen down on its coverage of the far-right, presumably in the interests of covering both sides of the story.

“Corporate media has a responsibility to not amplify messages agitating violence against people because of their race and or religious background,” says TAF’s Dylan.

Francis D’Souza, CityNews’s senior manager of editorial, apologized for Seatle’s remarks, reading a statement on air a week later to say that the network’s coverage “did not meet our editorial standards.”

Seatle apologized as well via Twitter for her “insensitive remark which gave the impression I support racist groups… someone of my experience should know better.”

But not everyone among Pegida counter-protesters agreed with TAF’s tactics.

“You don’t attack the media as the fascists love that,” says Christine (she only gave her first name), who attended with her 15-year-old son Adam and his friend because of the mosque attacks in Christchurch. It was their first protest.

An unidentified TAF member interrupts our interview. “If you’re not coming out to fight, you’re not one of us,” he says.

Shortly after this exchange, another unidentified female counter-protester intervenes. “I hear your frustration,” she says, “but ultimately the media are giving them a platform and portraying us as the bad guys.”

Part of a larger international movement, Pegida was one of the first anti-Muslim groups to spring up in the new far-right in Canada, holding its first demonstrations in Quebec around 2015. They’ve been a consistent presence ever since, holding rotating rallies in Ontario between Toronto and London on a monthly basis. The group itself is not considered militant, but their rallies have attracted members with ties to neo-Nazi-inspired groups like the Northern Guard, Proud Boys and the armed anti-Islamic group known as the Three Percenter militia.

Balgord says that the anti-Muslim movement is more diverse – it also tends to be much older – than, for example, the alt-right neo-Nazi movement, though they both target Muslims.

The city is looking into its options when it comes to banning “hate-sponsored rallies” from city and provincial property. A report is expected in May.

The federal government, meanwhile, is looking at another approach – whether to force social media companies to adjust their algorithms to screen out hateful content online where many groups thrive.

“We’ve got to find a way to identify them rapidly, even before they have the chance to be posted in the public domain, and bring them down,” says public safety minister Ralph Goodale.

In a major policy shift, Facebook recently banned the promotion of white nationalism and white separatist views on its platform. Facebook will also begin directing users who try to post content associated with those ideologies to a non-profit that helps people leave hate groups.

But Facebook still has to effectively enforce the policy if it’s really going to tackle hate speech, which in Canada seems to be ramping up before the fall federal election.

Back at the Pegida rally, police are escorting members of the group from behind the barricades toward University Avenue. One has his Make America Great Again cap knocked off his head. A couple are followed (with media in tow) by counter-protesters all the way to the subway.

“Get the fuck out of our city and don’t come back – you’re not welcome here,” shouts a counter-protester. The crowd erupts in cheers. They were victorious on this day.