The issue was framed as one of inclusivity, but the idea of inclusivity in the LGBTQ movement has to do with its origin among mostly white, middle-class male activists 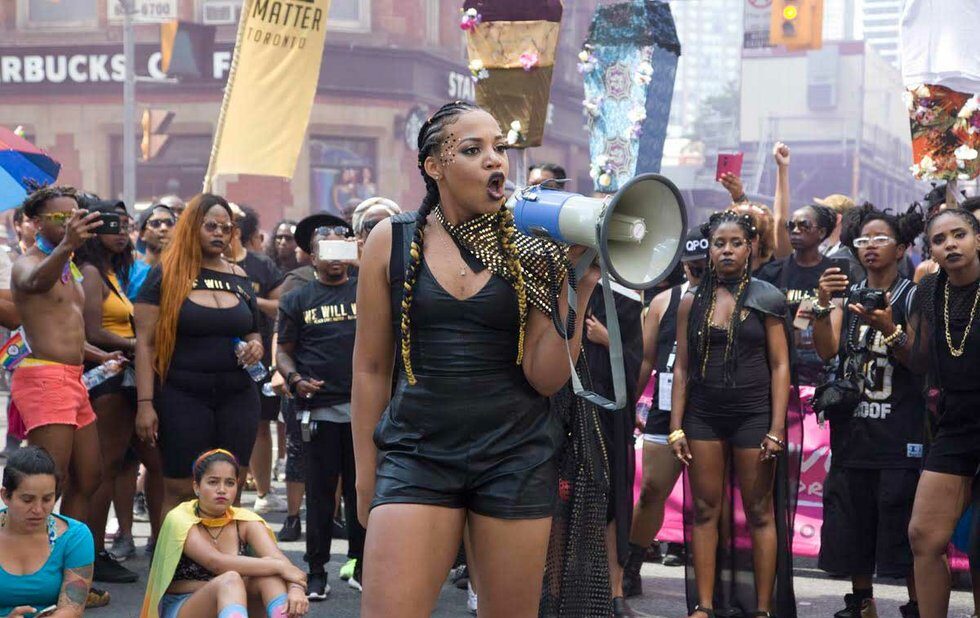 The soundtrack to my day is CBC Radio.

On March 28, the lead item in the early morning news was a report that Councillor John Campbell was proposing a motion to cut Pride Toronto’s funding because of its decision to exclude an official Toronto police float from the Pride parade. It was a fairly long item for radio news.

Campbell described Black Lives Matter as “bullying” Pride Toronto into taking this position after it stopped the parade last year. He made a great deal of the value of “inclusivity” at Pride. Though not a member of the LGBTQ community or movement, he defined its core value as inclusivity rather than, say, social justice. He spoke at length and in a calm voice that signalled that he was being quite reasonable about all this. Campbell’s opinions and perspectives were not balanced by other points of view. No other voice was heard. Later Campbell said that Pride Toronto needed to “come to their senses.”

I was absolutely stunned.

I participated in the Pride march in the early 1980s when it was still a fairly small annual protest that ended up at the University of Toronto, where 20 organizations set up tables. On a small stage, the Parachute Club performed their anthem Rise Up and the Sisters of Perpetual Indulgence swished around on in-line skates. I still remember the boy I liked, wearing only Adidas shorts (with the little pocket on the back), running in and out of a sprinkler.

Since the 1990s, the parade has grown and changed.

I witnessed the protest by Black Lives Matter that halted the parade on Yonge in 2016. I saw 10 or 12 Black queer women (women have played an extraordinary role in grassroots organizing in Toronto for years) and a few of their young Black gay friends. Many wore leather and looked like they were having fun, though it must have taken extraordinary courage to bring the whole parade to a stop as a protest against systematic police violence against Black people and anti-Black racism in Pride Toronto itself.

In the early years of gay liberation, the police always tried to prevent gay marches from taking Yonge Street. I remember vividly a large march where individual police officers started to grab people at random from the edges of the crowd, beating and arresting them. The grand marshal gave instructions on the sound system for everyone to sit down on the street. This made the police violence instantly visible to press photographers, and it immediately stopped.

There was a long delay while Bob Gallagher negotiated with senior police officers, and then the march continued.

I was never comfortable with the police float in the parade or with the recruiting booths for various police and prison services. Hundreds of small rainbow flags with the prison service badge are handed out.

I stopped listening to the CBC. Instead I played CDs: Refused, The Shape Of Punk To Come, which actually includes a song about radio, and a boxed set of Beethoven’s late string quartets.

I started to understand why some female students in my classes couldn’t bear to listen any more to CBC Radio after the Jian Ghomeshi scandal broke. Now I don’t want to listen to the CBC any more.

The idea of fairness and balance in news reporting is not as simple as it seems. The CBC’s Journalistic Standards And Practices guide is written in fairly general language. Fairness, balance and impartiality are the main themes.

Was CBC Radio News justified in permitting Campbell to express his opinions on Pride Toronto without any other point of view? For me the issue is clear: CBC broke the most basic rule of journalism, to give both sides of the story.

There is also the more debatable issue of whether this story was news at all.

A city councillor says he has five or six votes for cutting Pride’s funding out of a city council of 44 members. That was the “news” that CBC Radio News led with. City council would eventually vote 27-17 on May 26 to renew the city’s $260,000 in funding to Pride.

The CBC Radio News story was covered by the Canadian Press’s Brett Bundale, whose report was printed by the Toronto Star the following day and Maclean’s magazine website. Bundale follows standard journalistic practices of balancing Campbell’s statements with quotes from Black Lives Matter. In an email to me,  Bundale confirms that he had no problem contacting Janaya Khan, co-founder of Black Lives Matter, but he had more trouble getting hold of Pride Toronto, who were not quoted in his story.

We know about cutbacks to the CBC budget and complaints from former prime minister Stephen Harper affecting its coverage. Perhaps the problem is understaffing?

Journalists at the CBC are expected to work across all platforms: radio  and TV news and the CBC News website. Perhaps this led to the problem? The reporter who filed the story, Makda Ghebreslassie, is described online as a “video journalist.”

But I was also concerned that the CBC may now measure a successful story by the amount of activity it generates on Twitter.

The story actually seems to have little substantial content. It is “news” because it creates controversy, and controversy generates Tweets.

It turns out that the executive director of Pride Toronto, Olivia Nuamah, was not immediately available to the CBC. In an email, Nuamah explains that if the reporter had actually turned up at the offices of Pride Toronto, she would probably have gotten her interview. For me, this raises a whole series of disturbing issues.

Doesn’t the CBC have LGBTQ reporters?

Ghebreslassie’s story was repeated that evening on CBC Television. This time Campbell’s position was balanced by a statement from Councillor Kristyn Wong-Tam, who does not support de-funding Pride. This is also the position of Mayor John Tory and police Chief Mark Saunders.

But the damage was already done. The issue was framed as one of inclusivity.

The idea of inclusivity in the LGBTQ movement has to do with its origin among mostly white, middle-class activists.

Inclusivity as a goal means the (sometimes painful) process of broadening the movement’s scope to include the lives, perspectives and forms of organizing of a much more diverse population. Inclusivity in this sense means including Black Lives Matter, a separate organization from Pride Toronto, some of whose members are part of the LGBTQ community.

The thematic frame for the story has become an empty and ahistorical concept of inclusivity. Matt Galloway, host of Metro Morning, said the program has received many emails on both sides of the issue. But he concluded that the main issue is that you’re either inclusive or you’re not inclusive.

I received an email response to my complaint from acting executive producer Rita Tonelli of CBC Toronto. Having reviewed the script, she agrees that it is reasonable to expect a voice countering Campbell’s. However, Pride Toronto did not respond to the reporter’s request and another city councillor was not readily available. What do these phrases mean? A looming deadline made the story that urgent?

The CBC ombudsman is Esther Enkin. In an interview given for World Radio Day 2017, she says she sees her job as listening to people who have issues with the CBC and advocating on their behalf to the organization. This has not been my experience with her.

Her May 24 letter in response to my formal complaint added very little, but does confirm that the Campbell story was a CBC “exclusive” and the reason for rushing it on to air was “the fear that one would lose exclusivity.”

An interview with Pride executive director Nuamah that aired on Metro Morning days later was really great. It’s completely unclear why the whole story could not have waited a day (the meeting of the economic development committee to approve the budget was more than a month away) so that Campbell and a representative of Pride Toronto could have given their different perspectives one after the other on the same edition of Metro Morning.

Alan O’Connor is a professor of media studies at Trent University.