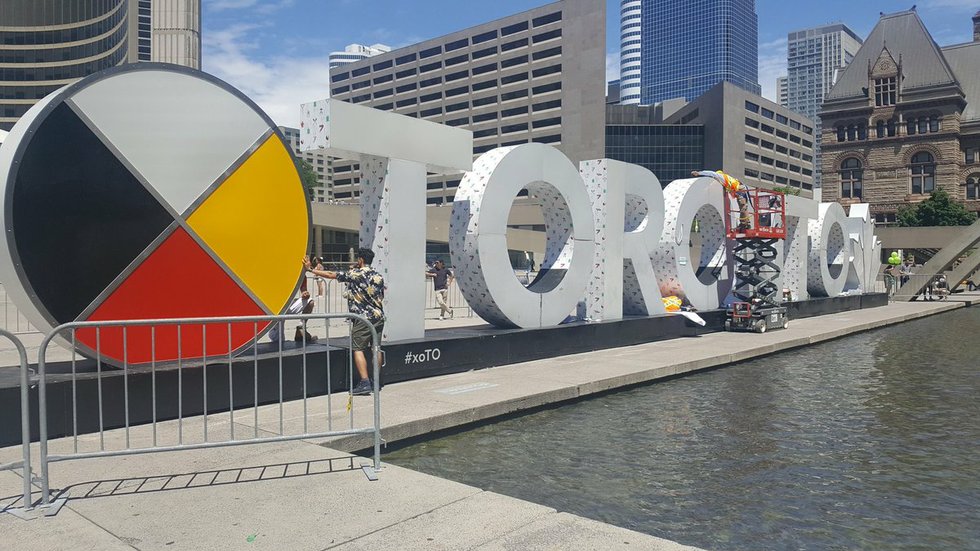 The Medicine Wheel outside City Hall will be taken down after Canada Day and reappear in early October.

In honour of National Indigenous Peoples Day, the Toronto sign at Nathan Phillips Square has gotten two upgrades: a custom-vinyl wrap around its famous photo-op letters and the addition of a Medicine Wheel.

The wrap, which resembles birch bark inlaid with Indigenous symbols of significance, was designed by Maaiingan Productions, an Indigenous owned and operated communications firm based in Toronto and Wasauksing First Nation. The Medicine Wheel was chosen in consultation with the Toronto Council Fire Native Cultural Centre.

“The Medicine Wheel is a healing depiction. There’s a lot of teachings that are in it,” says Frances Sanderson, co-chair of the city’s Aboriginal Affairs Advisory Committee. She adds that its purpose is to spark conversations and to prompt education and understanding.

According to Sanderson, the addition shows the City of Toronto’s support for Indigenous communities and the work that has been accomplished together.

“It’s validation,” she adds. “It’s a partnership that we have now with the City of Toronto.”

However, both fixtures are only temporary – the Medicine Wheel will be taken down after Canada Day and the vinyl wrap will be removed in the fall. Sanderson says the Aboriginal Affairs Advisory Committee plans to reuse both elements in public installations in the future.

The additions to the Toronto sign coincide with the launch of a public awareness campaign to increase Indigenous visibility in the city. The City of Toronto and Toronto Aboriginal Support Services Council (TASSC) hope to “raise awareness about Toronto Indigenous heritage and the resilience of Indigenous peoples in Toronto” with the fifth phase of its Toronto For All campaign.

Created by social impact agency PUBLIC Inc., the campaign features a land acknowledgment statement and will appear on social media and transit ads this month.