Will the shooting death of Michael MacIsaac finally change police use of force training in Ontario? 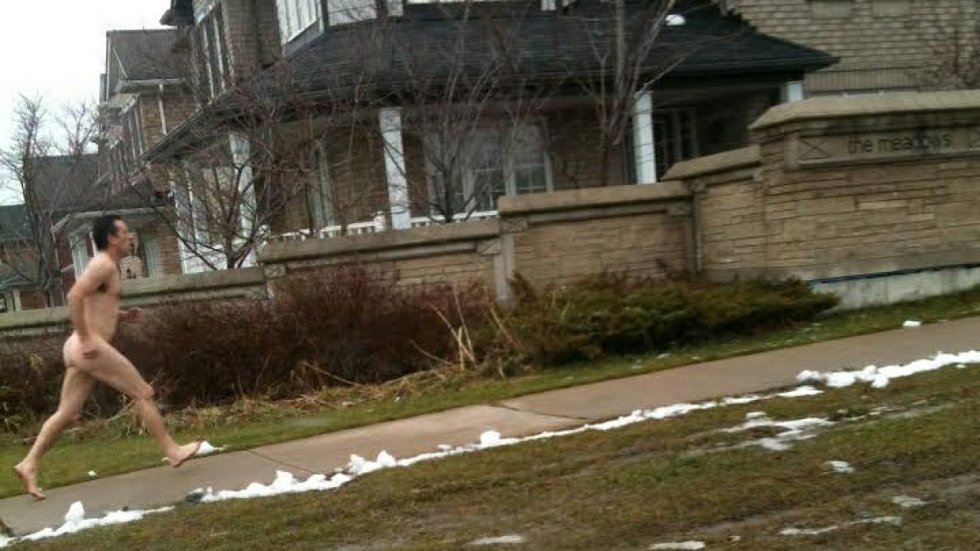 Michael MacIsaac was experiencing symptoms of postictal psychosis when he was spotted running naked through his Ajax neighbourhood on a cold day in December 2013, reportedly after confronting his wife and sister-in-law. Several neighbours reported him to police.

He was holding a metal leg from a patio table he had broken on a neighbour’s porch when three Durham Regional police officers arrived on the scene. He was shot within 12 seconds of their arrival, twice in the chest by Constable Brian Taylor after advancing toward the officer. MacIsaac died in hospital the next day. According to the province’s Special Investigations Unit, which cleared Taylor of any wrongdoing, MacIsaac “confronted three separate motorists,” one of them with a rock, before his encounter with police.

It’s an all too familiar story for families who’ve had loved ones die in encounters with police.

Since 1978, at least 65 people who were mentally ill or in crisis have died in Ontario as a result of interactions with police officers, according to research conducted by the Osgoode Hall Law School Innocence Project. Forty-three coroners’ inquests have been convened to examine the circumstances of those deaths, 31 have resulted in recommendations on the need to improve officer training in interactions with the mentally ill.

But people in crisis continue to end up dead. And basic training for police has not changed to include crisis intervention and de-escalation techniques despite inquest recommendations and former Supreme Court Justice Frank Iacobucci’s 2014 report into the police’s mishandling of interactions with people in distress following the shooting death of Sammy Yatim.

At a press conference at Queen’s Park on Wednesday, October 25, Innocence Project director Alan Young, who was approached by MacIsaac’s sister about his case, formally called on the province to write a specific provision into the Police Services Act requiring new police recruits to undergo mandatory de-escalation training.  (The family has filed a separate civil suit against Durham Regional police and Durham Paramedic Services.)

In a letter to Attorney General Yasir Naqvi, Young writes that the group is prepared to pursue a constitutional challenge on behalf of the MacIsaac family if the province “cannot make a binding agreement in writing” by January 2, 2018.

“The government has, time and time again, pledged to institute reform in Ontario policing,” writes Young. “The government has also promised specifically, on numerous occasions, that it will be addressing the senseless fatal interactions between the mentally ill and the police. There need not be more waiting there need not be more patience. The issue can be dealt with now.”

Young notes in his letter that “The Police Services Act has not been the subject of any significant reform in 27 years. Meanwhile, the landscape of policing has significantly changed.” British Columbia is currently the only jurisdiction in Canada to mandate de-escalation training, doing so in 2015 after the fatal tasering by the RCMP of Polish immigrant Robert Dzienanski in 2007.

Young argues that a successful constitutional challenge can be launched under section 7 of the Charter Of Rights And Freedoms on the grounds that “agents of the state who are statutorily empowered… to deprive individuals of life, liberty and security of the person must be properly and sufficiently trained in the use of fatal force and the de-escalation of interactions with persons who are or may be mentally ill or in crisis.”

To support a possible case, Young says he’s contacted several experts in the field who are prepared to testify on the family’s behalf. The Innocence Project has also compiled research dating back to 1978 on the circumstances surrounding deaths in Ontario involving mentally ill people or people in crisis in confrontations with police.

The research reveals that almost half of the 65 deaths involved Toronto police and 87 per cent involved people were killed by one or more gunshots. The research also shows that 26 per cent of those who ended up dead were exhibiting suicidal behaviour. According to the data, 11 per cent of the victims had a gun and 27 per cent had a knife. 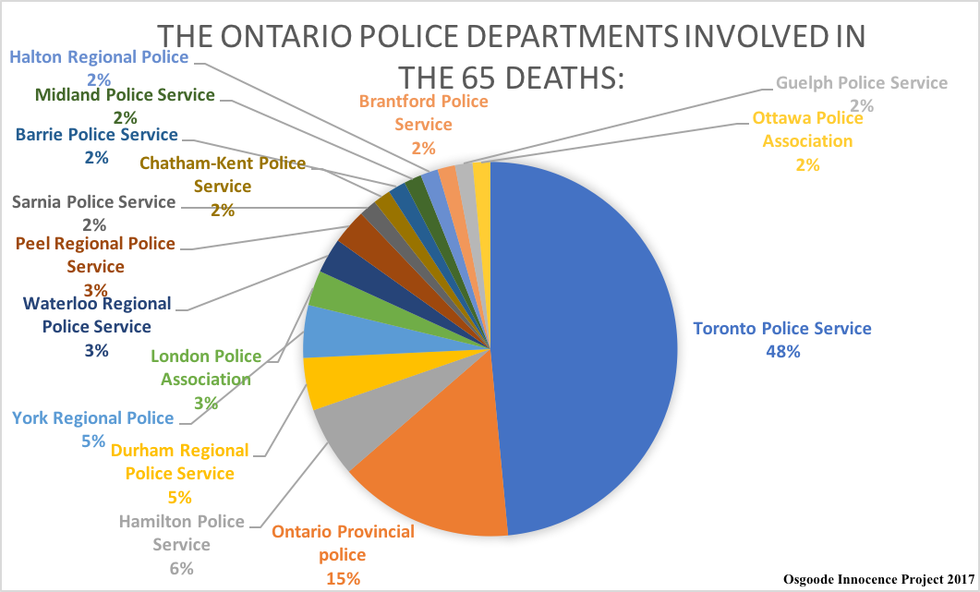 Causes of death in altercations with police 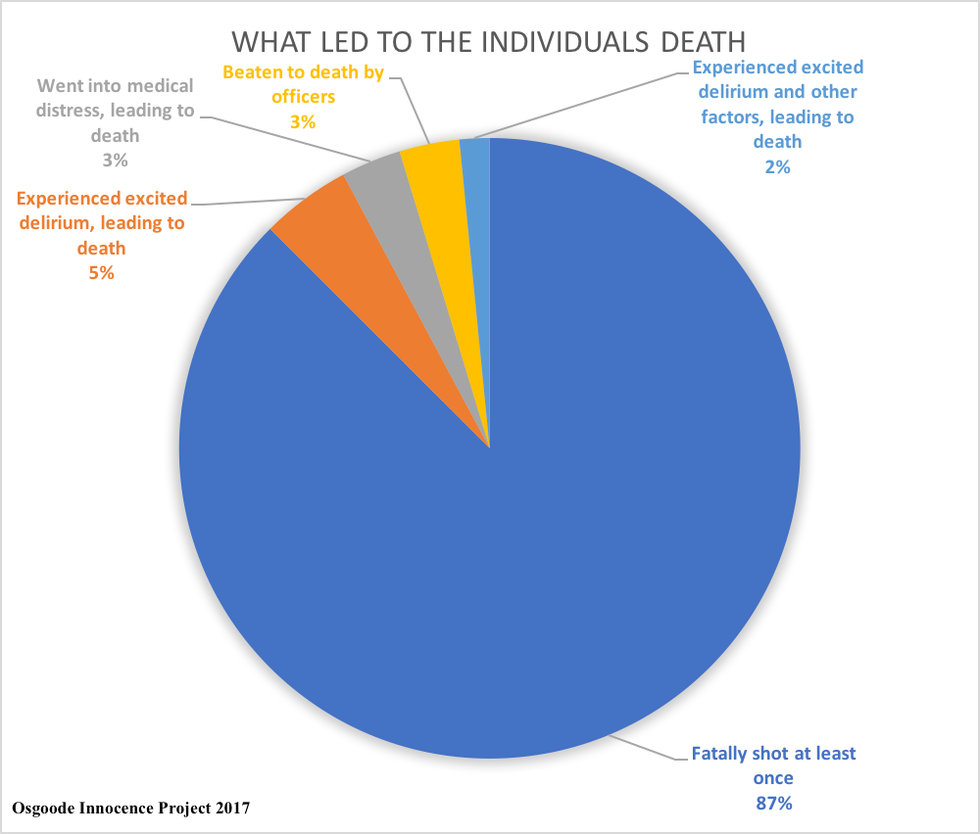 Mental illness of individuals killed in altercations with police 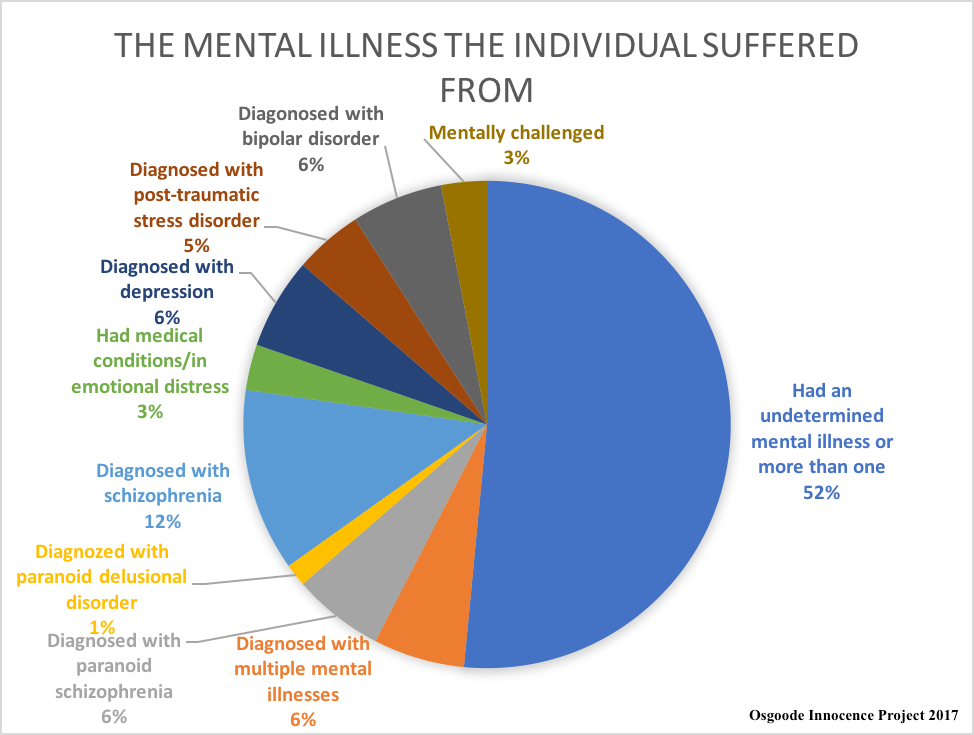 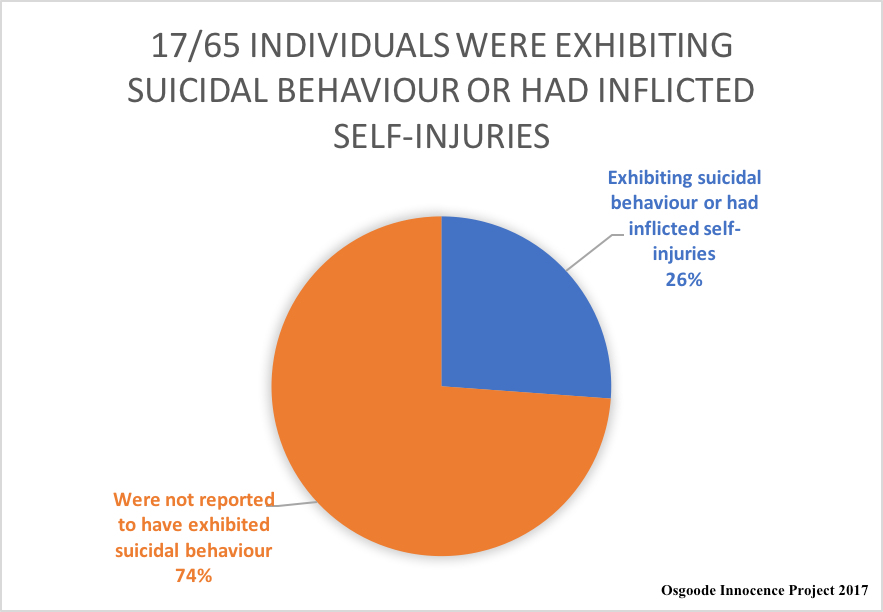 Weapons possessed by individuals during deadly encounters with police 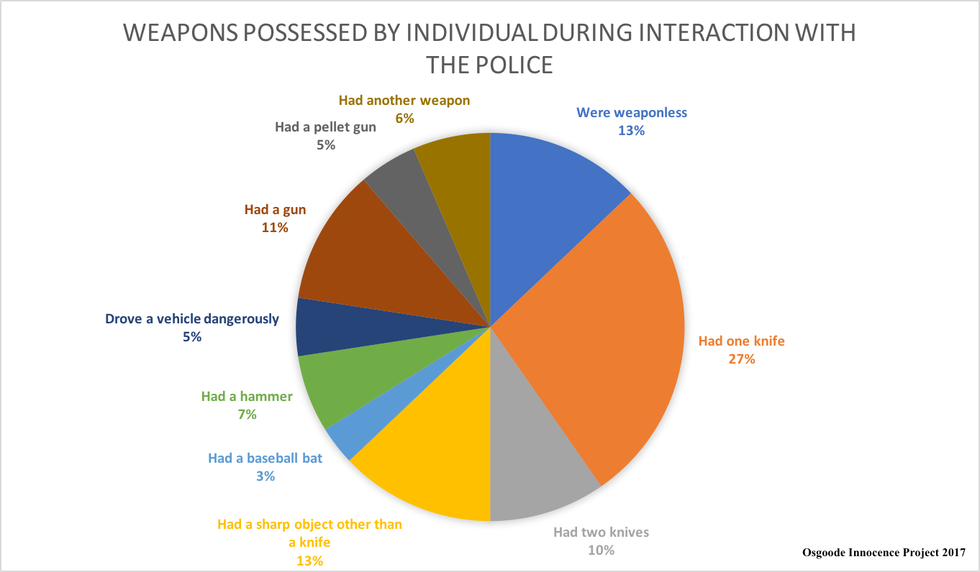