In pushing out Cole, the paper has dishonoured the work of its pioneering reporters who had documented the harms of police carding – and lost its strongest voice on race issues, writes Landsberg 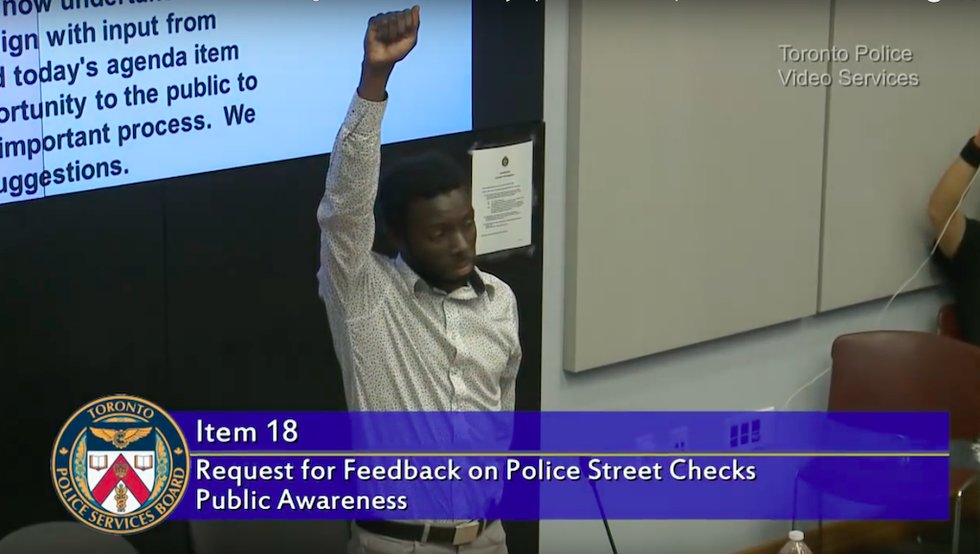 When Desmond Cole, a Toronto Star freelance columnist, stood up at the Toronto Police Services Board meeting April 20 and denounced the police use of carding data, it should have been a proud moment for the Star. The newspaper has fought long and honourably for the end of the police practice of stopping Black youth at random and collecting (and keeping) information about them.

Speaking with sober and heartfelt eloquence, Cole told the Board that he had made a pledge to Black children he’d met at a Black History Month event at the Children’s Aid Society of Toronto (which disproportionately removes black children from their families). He said he had promised the kids he would stand up for them because they could not stand up for themselves. Since the province passed new rules making arbitrary street checks illegal, Cole argued, the Board should stop making the information already gathered, much of it illegally, available to police.

He finished speaking he stood he raised his arm he quietly refused to leave until he had an answer. Board chair Andrew Pringle did not have an answer. Instead, he adjourned the meeting.

The Board’s silence was beyond cowardly. It was a disservice to the citizens of Toronto. The Board has itself published expert studies showing that carding is demeaning, functionally useless and downright harmful. Cole was later escorted out of the meeting by police.

Not long after the confrontation, Cole was told by his editor at the Star of a policy, as the paper’s public editor Kathy English would later put it in a column defending the paper May 4, “that journalists do not take public stands on public issues or become the news.” Faced with a decision between his activism and writing for the Star, Cole chose activism and decided to leave the paper’s employ.

Now the Star itself is in the news, egg splattered on its tie. In one blow, it arguably dishonoured the work of its pioneering reporters who had documented the harms of carding – and lost its strongest voice on the race issues plaguing our city.

But in pushing Cole out, the Star seems to have applied a double standard on its own policies, and I speak as someone who spent 25 years as a columnist and activist at the paper.

For all those years, the Star backed my feminist views, at a time when feminism was an urgent but minority cause, unlike its wide acceptance today. My editors, in fact, encouraged my activism.

When I fought to prevent a child care centre closing, my editor printed petitions in the paper, and arranged for a photographer to record my delivery of the reader-signed documents to Premier Bill Davis. (He was a no-show). They even made a TV commercial showing me knocking on the doors of welfare mothers to stir up trouble for bad landlords.

I marched on picket lines I protested at Queen’s Park. I know I brought large numbers of readers to the paper. I know the paper valued and rewarded me. Is race less vital than poverty or sex discrimination? People of colour who are (or were) loyal to the Star, will not ignore the fact that one of their own has effectively been shown the door for his activism on their behalf.

Yes, reporters must refrain from becoming embroiled in the stories they cover. Their professional neutrality is paramount. But columnists are a different kettle of fish. We swim against the current and are valued precisely for the often contrarian opinions we bring to the mainstream.

When a columnist is also an activist – and hired for that very reason, as Cole was – he or she brings not only insider knowledge of a community, but brings that community to the paper.

A marginalized people can begin to trust a paper that represents them so forthrightly. It’s not just their readership, which itself is extremely valuable to a newspaper. It’s the wider issue of an informed citizenry that can believe its media because they are inclusive enough, brave enough, open enough, to welcome views outside the mainstream. We’ve seen what happens when media fail in that duty in the United States. Now The Star has failed its own readership, and itself.

I’m angry about the loss of Cole’s respected and unique voice in my paper. I’m upset, along with many others, that race issues have been so disrespected when they should be a high priority. I’m bewildered by the Star’s blunder. And I’m sad to think that the newspaper I cherished as a home for progressive voices might be crumpling into bland and craven conformity.

Michele Landsberg is a longtime journalist, author and social activist.