Tens of thousands of migrant farm workers toil in fields across Canada without the possibility of applying for permanent residency, health care coverage or basic labour rights 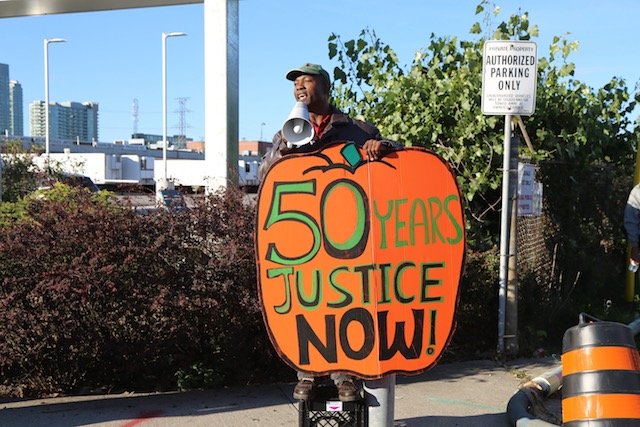 The Harvesting Freedom Caravan arrived outside the Ontario Food Terminal on the Queensway Sunday morning, September 25, to mark the 50th year of the Seasonal Agricultural Worker Program – and to call for permanent immigration status and better working conditions for temporary foreign agricultural workers. The caravan had headed out from Leamington September 4 on three-week trip to Ottawa to demand support for workers. Demonstrators carried large signs in the shapes of vegetables. On the yellow bell pepper were the words “You’re eating injustice.”

Tens of thousands of migrant farm workers from the Caribbean, Mexico, Guatemala, The Philippines and Thailand toil in fields across Canada without the possibility of applying for permanent residency, health care or basic labour rights. In Ontario, for example, there is no minimum wage for farm workers. Many are tied into contracts with single employers and can be sent home without cause. NOW spoke with two former migrant farm workers at the rally.

Before he became an organizer with Justice for Migrant Workers, Gabriel Allahdua, who is from St. Lucia, worked for four years in greenhouses producing tomatoes and peppers.

“Because farm workers have no status, we have no rights. Canadian immigration policy places them in a very precarious position. They are our modern-day slaves.

“Why doesn’t the public in Canada know these conditions exist? Simply because the threat of deportation keeps us quiet. The moment you speak up they send you home. Workers can’t participate in the caravan because that is the truth of it.

“So much power is vested in the hands of the employer. We are tied to the farm by a work permit. On top of that, the farmer controls our housing. We are here to do jobs Canadians don’t want to do, but with no rights.

“Does the word ‘temporary’ mean 50 years? Is there something wrong with the dictionary in Canada? Fifty years is way too long for workers to gain rights.” 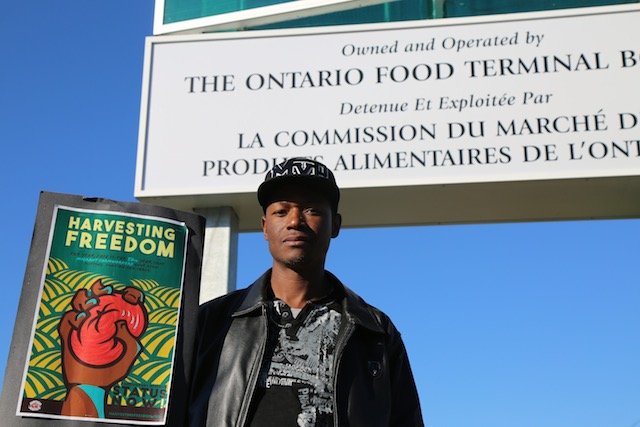 Carlous Burrell, who is from Jamaica, started a two-year contract at a cucumber farm in 2014. He says he was terminated for advocating for better working conditions.

“I lived in a three-bedroom apartment with six people per bedroom. They charged us $300 each every month for this. The farmer does the collection for this, subtracted from your salary.

“We are not allowed to be sick. We have to work seven days a week. People are sent home every day.

“I was part of the pesticide spray team. We started work at 5 in the morning. There were no provisions to keep workers safe. We were having to pass through the chemical fumes unprotected. When I shared my concerns, I was quickly shut down. They told us the chemical being sprayed was not harmful, but we all know that all chemicals are dangerous when they are not supposed to be inhaled. I was terminated.

“If we come to Canada healthy, isn’t it right for us to go back to our family healthy? Canada needs to know.”