While the feds stall on appointing an ombudsperson to check mining atrocities abroad, dozens of targeted killings have claimed the lives of activists opposing Canadian projects 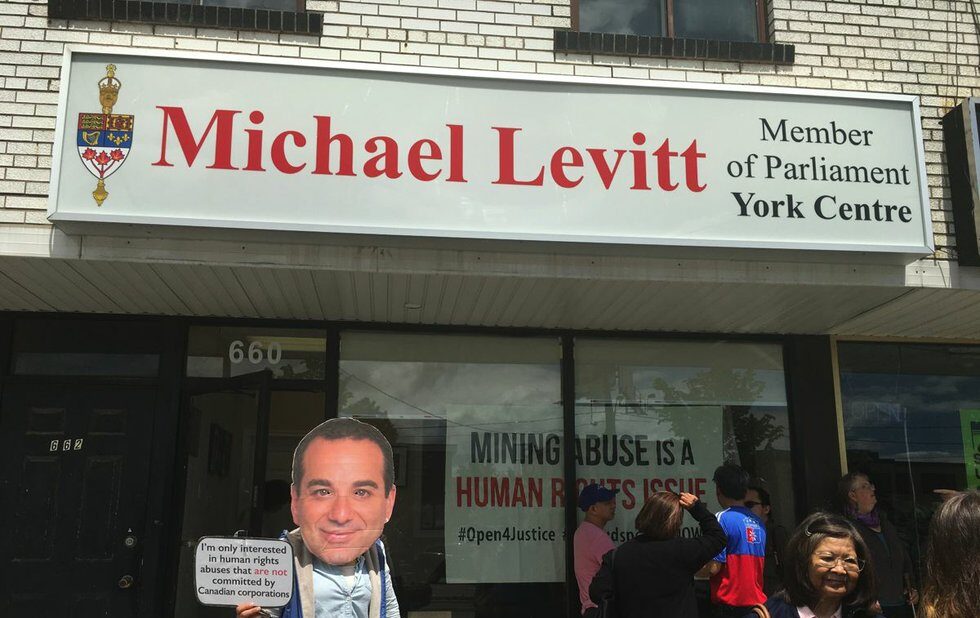 You shouldn’t have to protest to get the chairman of the Subcommittee on International Human Rights to act on Canadian mining abuses abroad, but such is the current political climate.

So, there we were on Friday, May 26, occupying the North York offices of Liberal MP Michael Levitt.

It was over a decade ago, in 2005, that Parliament’s Subcommittee on Human Rights and International Development published its report on the Canadian mining industry’s environmental and human rights abuses abroad. It led to calls for the appointment of an ombudsperson to investigate complaints, a position that has yet to be put in place.

Meanwhile, Canadian mine projects around the world continue to threaten, abuse and take lives.

The chair of what’s now known as the Subcommittee on International Human Rights (SIHR), Levitt told Indigenous leaders from mining-ravaged communities in Lumad and Subanen regions of the Philippines in Ottawa last month that they’d have to take their complaints of forced displacement and destruction of food sources against Calgary-based TVI Pacific elsewhere. Levitt and other members of the subcommittee referred to the harm caused by overseas mining as a trade issue, not a human rights one. He has since agreed to contact a member of the Philippines delegation slighted by his dismissal of their issues.

But as for those long-delayed plans for an ombudsperson, Levitt refused to commit until further study later this fall – even after we showed him 25 reports, totalling more than 1,000 pages, detailing the human rights abuses of Canadian corporations abroad. We included recommendations from four different UN bodies.

It’s disheartening to hear politicians continue to use the excuse that more study is needed more than a decade after the government-led National Roundtables on Corporate Social Responsibility.

As Mining Watch Canada noted, since the Corporate Social Responsibility counsellor was appointed in 2009, none of the six cases the office has accepted have been resolved.

People who’ve engaged with the office, says Mining Watch Canada, “have at best wasted their time and limited resources. At worst they have exposed themselves to further harm at home for sticking their necks out.” Targeted assassinations are a common form of retaliation in other countries for organizing against Canadian mines.

Between 2001 to 2016, there were 101 alleged cases of political killings of environmental activists internationally. Conflicts over mining projects are the most deadly, accounting for 75 per cent of recorded cases, according to environmental network Kalikasan.

A 2016 report of the Justice and Corporate Accountability Project at Osgoode Hall Law School documents 100 incidents of violence between 2000 and 2015 involving Canadian mining companies operating in Latin America. This includes 44 deaths, 30 of which the researchers describe as “targeted.”

An independent ombudsperson to investigate complaints against Canadian mining companies operating abroad is something that the Liberals, the Greens, the NDP and Bloc Quebecois all included in their election platforms. But with a strong majority in Parliament, the Liberals have backpedalled.

Sakura Saunders is a member of Mining Injustice Solidarity Network.