NOW MagazineNewsHow did a monument to a Nazi SS division end up being erected in Canada?

How did a monument to a Nazi SS division end up being erected in Canada?

Defacing of cenotaph at the St. Volodymyr Cemetery in Oakville shines an uncomfortable light on ethno-nationalism and Canada's own lax history on war crimes 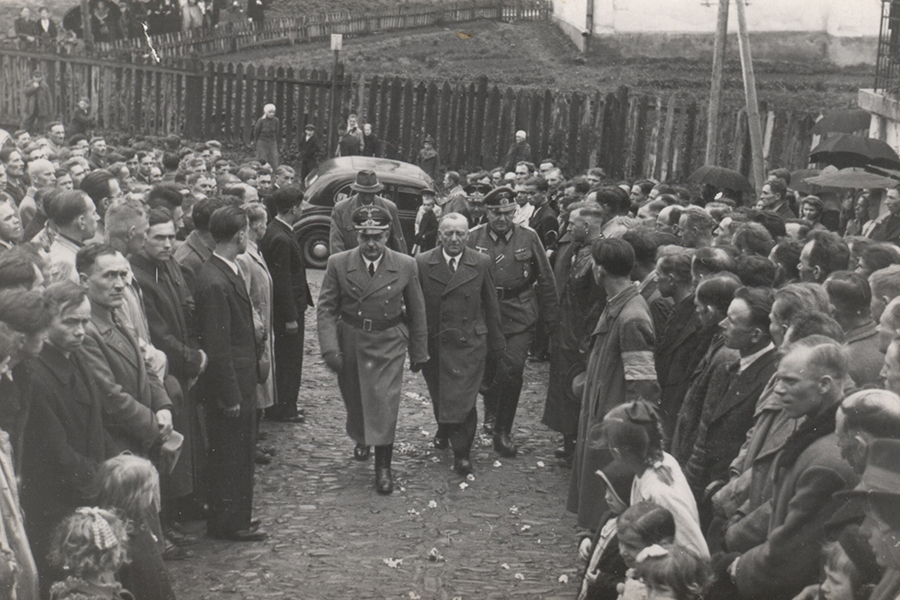 Photo from 1943 marking the recruitment of Ukrainian volunteers to Galacian Waffen SS Division.

In the wake of protests following the death of George Floyd at the hands of Minneapolis police, there has been a reckoning with historical monuments around the world. Here in Canada, many have also advocated for a closer examination of the historical deeds of some of our celebrated former leaders, demanding we confront their legacies in light of contemporary attitudes.

But how did a monument commemorating a Nazi SS division end up being erected in Canada?

The cenotaph at the St. Volodymyr Ukrainian Cemetery in Oakville is flanked by flags and set on a small, paved plateau.

Few Canadians may be aware that this memorial commemorates a major battle fought by the 14th Waffen Grenadier Division of the SS, a unit formed in 1943 and made up mostly of Ukrainian volunteers that fought against the Soviet Red Army during the Second World War.

Around June 21, the stone cenotaph was vandalized and spray-painted with the words “Nazi war monument.”

Halton Regional Police, which were first investigating the incident as a “hate-motivated” crime, issued a statement on July 17 to clarify that the incident is now being investigated as vandalism.

This is not the first time the monument has come under fire. In 2017, the Russian Embassy in Ottawa was accused of fomenting division by posting tweets that the memorial glorifies a Nazi history.

Ihor Michalchyshyn, executive director and CEO of the Ukrainian Canadian Congress, denounced the comments as an attempt to “stir up controversy” and “obfuscate the [situation]” taking place in Europe at the time – namely, international backlash over Russia’s annexing of Crimea.

Since then, many others have urged a more serious reckoning with the monument and the political allegiances of some of the forebearers of the Ukrainian independence movement during the Second World War.

The Ukrainian nationalist movement that first arose during the Tsarist era of the Russian Empire, became split between moderates and the more radical Organization of Ukrainian Nationalists (OUN), which ultimately culminated in its defeat at the end of the Ukrainian-Soviet War in 1921. This split was most apparent in the region of Galicia, located in what is now western Ukraine, but which until the First World War was a part of Austria-Hungary.

The OUN, which viewed Russia as the greatest enemy of Ukrainian nationhood, fostered a complicated relationship with the Nazis. The “Banderists” in particular saw Jews as the “vanguard of Muscovite imperialism.”

The OUN also maintained informal control over many units of the auxiliary police, especially in Galicia where the local police helped to implement the Nazi genocide of Jews, Ukrainians, Russians, Byelorussians, and Poles.

The Ukrainian Galician Division of the Waffen-SS was formed to support German forces on the Eastern Front following a series of Nazi defeats that had decisively turned the tide of war. Some were drawn from the ranks of the OUN, which was attached to the 13th German Army Corps and initially charged with defending an 80-kilometre-long frontline near Lviv. The Galician Division also assisted the Nazis in anti-resistance actions and reprisals.

According to University of Ottawa professor and historian Ivan Katchanovski, the unit committed a massacre of more than 1,000 Polish civilians in Huta Peniatska in 1944. The town was razed and most of its inhabitants were murdered, including many young children.

In July 1944, facing an advancing Red Army, the Galician Division was encircled and largely destroyed. The war would end less than a year later.

Despite the entire Waffen-SS being declared a “criminal organization” at the Nuremberg Trials, Canada was criticized for a “lax pursuit of accused war criminals.”

However, the 1985 Commission of Inquiry on War Criminals in Canada, also known as the Deschênes Commission, concluded that charges of war crimes against the Galician Division have “never been substantiated,” despite its role as an accomplice to one of the most violent and murderous regimes in history.

The cenotaph at the St. Volodymyr Cemetery in Oakville portrays those who fought a repressive communist regime as heroes. It also represents a dangerous moral equivalency between those who defeated fascism and those who allied with it in the name of nationhood.

Harrison Samphir is an editor and writer based in Toronto.