As my dream cruise docks, I’m caught in a wave of conflicting emotions 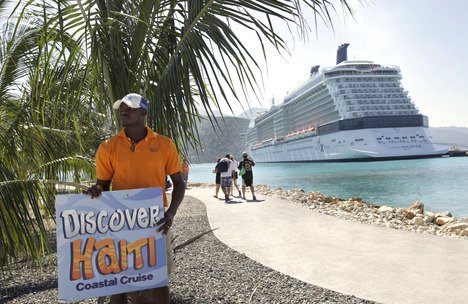 I arrived in Haiti in the middle of a perfect vacation.[rssbreak]

It was just a week after the quake, which we’d learned of while at sea.

We imagined the cruise ship’s stop in Haiti would be cancelled. Pull up to the island with 3,000 North American vacationers? Impossible. We were, all 3,000 of us, there to party. Some wanted just to lie on the beach and forget the cold and harshness of where they live fifty weeks a year. Some wanted to get stupid drunk and puke all over the elevators.

All of us wanted to indulge the sense of being temporarily without wants. It’s a psychological state of mind that cruise lines are brilliant at inducing and satisfying.

But here we were, cruising into a death realm. How do you get ready for that? You make a donation. You consider, with some relief, that you have water and other supplies on board to donate. We learned that the cruise line had considered cancelling but received an adamant message from the Haitian government saying it was unthinkable to withhold the infusion of cash that every docking provides to a desperate economy.

I’ll forgo the adjectives I’ve heard applied to cruisers who stopped in Haiti. I was one of them. I am a Toronto street outreach worker, and my wife’s an artist who just finished teacher’s college and is floating the idea of teaching on a reserve next year. Our tablemates included a woman who leads women’s support groups in Melbourne and a Southern Baptist preacher from Georgia who builds homes for the poor.

In Labadee, where we docked, locals were eager for business. Some spoke of their personal tragedies, but most did not. It was difficult, since we wanted to “spread the wealth” and do business with as many vendors as possible there were so many selling all kinds of carvings and crafts.

It was uncomfortable. There was no way not to be overwhelmed by the contrast in circumstances between us and those whose images had invaded the completely artificial paradise in which we’d travelled.

I found it much easier interacting with the locals once I’d spent my cash. My statement that “J’ai acheté trop, l’argent est finis (I bought too much, the money is done)” produced a palpable reduction in intensity. Some acknowledged the sad reality of scarcity with a nod or sigh.

These interactions had little depth. I can’t relay any profound insights. One man told me – without an ounce of drama – that he’d lost a close relative and that relative’s entire nuclear family. Another young man, selling beaded wrist bands, didn’t comprehend that I had no more cash and tied one of them around my wrist. But when he understood, he insisted I keep the bracelet. He said it would bring me luck.