NOW MagazineNewsNational Film Board gets boost with 3D launch

National Film Board gets boost with 3D launch 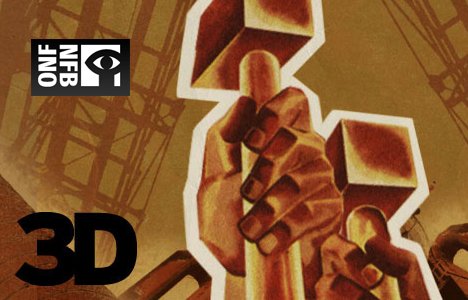 Everyone from James Cameron, to Taylor Swift, to ESPN is getting behind 3D video, and the buzz couldn’t come at a better time for National Film Board of Canada.

Canada’s public film producer and distributor just launched free online 3D and HD playlists, and has been enjoying an upswing in web traffic because of it.

“When we’re looking at our bandwidth graphs we’re noting a lot more activity,” said Stéphane Bousquet, the director of digital enterprises for the NFB. “Now that the major studios have sort of latched on to 3D we’re going to continue to experiment and innovate as much as possible.”

The 3D glasses are to be shipped free of charge and can be ordered from the NFB website.

Though Canada’s public film producer and distributor has been toying with three dimensional films since Norman McLaren’s first experiments over 30 years ago, the recent launch is one more step towards a new interactive era for the NFB.

Bosquet says the film board didn’t want to wait for industry to settle on dominant standards for 3D technology before giving the public a taste of their workmanship.

The films now available are only a snapshot of where the NFB is heading, he says.

“We decided not to follow the pack, but to lead,” he said, adding the film board wants to be ready to connect with Canadians at home, no matter what the living room of the future will look like.

And what a show it is.

Drux Flux, will mesmerize you with floating rhombuses and philosophically manipulated stills of industry. Falling in Love Again will shoot you into space and back again.

Over the next weeks and months the NFB will continue experimenting with 3D technology, eyes peeled, as multinationals embark on plans to roll out 3D consumer products across the globe.

Many observers have questioned the staying power of our newest dimension – and 1980s fad.

Sony Corp. is involved two separate partnerships to bring 3D television to market starting as soon as this June – one with Discovery Communications and Canada’s IMAX Corp., and another with ESPN.

It says things are different this time.

“We’re committed to 3D and investing heavily in it,” said Sony spokesperson Candice Hayman. “There’s a lot more content out there now.”

Sony is counting on sports fans and gamers to be early adopters of the technology, and hopes 3D television will be available in time for the 2010 FIFA World Cup.

IMAX will license films for a new dedicated network, and lend its proprietary 2D-to-3D technology to the cause. The company has been a purveyor of 3D films for decades.

As far as it’s concerned, what’s good for 3D is good for IMAX. And the success of recent blockbuster Avatar doesn’t hurt either.

“It’s a great way to expose our content,” said Jackson Myers, director of corporate communications for IMAX, of the licensing deal. “People will always want to seek out the best way to see something.

“Certainly the popularity of Avatar is introducing a lot of people to 3D content in a good way.”

There are no fixed dates for a 3D TV network launch in Canada yet. But plans are in the works.

As for the film board, it’s five-year-plan has Bousquet and co. tweeting their way into a new era.

Call it NFB 2.0 if you want, the “dimension” the NFB is most eager to take advantage of is the online one. With content available at no charge, and a video player that’s fully embeddable, they seem to be making all the right moves.

A 3D experiment is no gimmick for the NFB, says Bosquet. It’s all part of an effort to engage people with the films themselves.

“We want people to go nuts with their favourite films,” he said. “Our films are there for Canadians to use and do what they see fit with. It’s our pleasure.”