NOW MagazineNewsNDP breaks on through

NDP breaks on through

In what is supposed to be the. 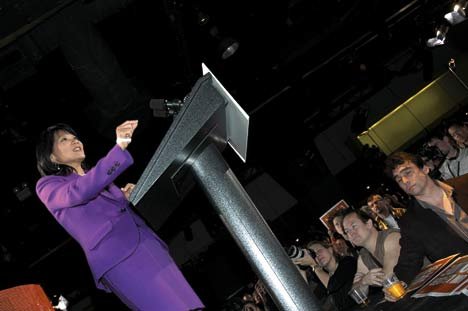 In what is supposed to be the NDP victory celebration at Kool Haus at Jarvis and Queens Quay, the mood is decidedly flat.

There aren’t enough celebrants to fill the cavernous space, and when an exuberant partier yells, “Seven more seats!” as the results come up on the big screen, it’s hard to know whether the sentiment is joy or sarcasm.

Yes, the party will have more bodies in Parliament. But this is not the breakthrough NDP leader Jack Layton so badly wanted. Not only is the 37-seat finish well short of former leader Ed Broadbent’s 43 back in the 80s, but several of Jack Layton’s pickups were formerly Liberal seats in diesel-swilling northern Ontario, where voters feared Stéphane Dion’s carbon tax would hit hard. The region’s already hurting from a downturn in forestry and other resource industries.

There were no gains in Quebec and BC, where Layton did so much campaigning, and he and his wife, Olivia Chow, were the only New Democrats elected in the city where they were stars of the municipal scene for so many years.

Former NDP MP Lorne Nystrom, who’s turned TV commentator for the evening, tells me, “I’m trying to give it a positive spin,” his tone suggesting it’s a bit of a slog.

Then the lights go down, the music comes up and Layton takes the stage. “I’m Jack Layton and I was running for prime minister,” he says, reprising his widely derided campaign claim that he had a chance of snagging the top spot. “We didn’t win the gold medal, but we gave it our best shot.”

Certainly, no one blames Layton personally for the disappointing result. He ran the tightest campaign and made the fewest errors.

But he also had more money to spend than any campaign in the party’s history, weak opponents and a tanking economy that makes the electorate more open to traditional NDP prescriptions for government intervention.

A strong leader, loads of dough and winning conditions: will the times ever be better for the NDP?

While it’s the Liberals who are seen as the big losers, they at least can diagnose their problem: a leader who picked the wrong platform for the times and lacked the communication skills to sell it. What they have to do is clear: change leaders. Next time they’ll have someone new in charge, likely Bob Rae or Michael Ignatieff.

But where does the NDP go from here? Perhaps this election marks the end of the illusion that the NDP will ever displace the Liberals as the voice of the moderate centre in Canadian politics. Even with a limp leader like Dion, the Grits can take 75 seats, twice as many as the well-oiled NDP.

The NDP is destined to be a supporting actor in the parliamentary drama. But in the pizza Parliament sliced into four parties, with the Green party trying to join the club, minority government will be the new normal, and there will be starring opportunities for the secondary players.

That’s precisely how the NDP has made its biggest contributions to Canadian politics in the past, managing to cajole reluctant Liberals into bringing in medicare and the now-deceased National Energy Program.

Now that the western-dominated Conservatives pose a threat to the progressive Canadian consensus, it will be ever more important for the NDP to use its political deftness to bring the other parliamentary players together in progressive consensus.

The NDP may not have top billing in act three of the continuing minority government series, but it will have a chance to steal the show.