The new face of gay lib in Toronto is profoundly racialized 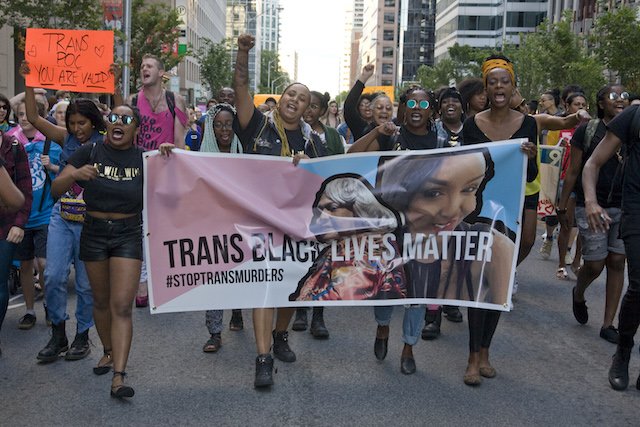 Thanks to the intervention of Black Lives Matter–Toronto (BLM-TO), the police will not be marching in military formation sporting uniforms and weapons in the 2017 Pride parade.

In Winnipeg, too, the new policy is no uniforms please. Under similar pressure, the Vancouver Pride Society has come up with a “compromise” that will restrict, although not ban, uniformed police contingents.

And debates within Halifax Pride pushed that city’s police to announce they are voluntarily withdrawing from marching.

Police are not the only issue when it comes to Pride politics.

At its national meeting last February, Fierté Canada Pride, the national association of Pride organizations, debated not only police participation, but also the growing impact of commerce-driven corporate sponsorship of Pride events.

As far away as Los Angeles, Pride organizers, who only last year were heavily criticized for trying to rebrand the celebration as a music festival, replaced the traditional parade with a protest march last weekend inspired by the massive women’s marches that took place after the Trump inauguration. “We’re getting back to our roots,” says board member Brian Pendleton.

There have always been political divisions in LGBTQ communities. In the 70s it was between the “liberationists” and the “assimilationists.”

The liberationists were largely young people from working-class backgrounds who’d been the first in their families to go to university. They were inspired by other movements demanding social change – anti-imperialist national liberation, Black liberation, women’s liberation.

Those we called “assimilationists” were largely drawn from the new class of gay entrepreneurs developing businesses catering to the community. They preferred a go-slow approach, trying to influence people in power to be nicer to us. The two groups didn’t really come together in Toronto until after the 1981 bathhouse raids, when they realized they needed each other.

The wave of new radicalism sweeping the community in different forms also has demographic and class foundations.

Last fall, I attended one of the community meetings Pride Toronto organized to discuss the BLM-TO demands, as well as the Pride AGM. I went expecting a shit show and a divided community. Both meetings were very well attended, filling cavernous auditoriums with hundreds of people. There were a few old faces, but the crowd was largely younger. They reflected the real racial and cultural diversity of Toronto, not to mention a full range of gender identities.

My worries about intra-community rancour were unfounded. In both cases, there was remarkable consensus on support for the BLM-TO demands, including ditching the police floats and guns.

It seemed that despite the often racist social media storm, the people who actually care about Pride enough to come to a meeting are pretty much on the same page. This was not a matter of a small group of radicals hijacking anything.

For years, the leadership of key LGBTQ organizations like Pride has been drawn from upwardly mobile types who had the comfortable relationships in the corporate and government worlds necessary to ensure stable funding. Such connections have been beneficial in generating growth and visibility.

But that funding has always come with strings attached, not to mention the potential for political meddling.

Commercialization has catered to those with money. Those who are seen as poorer have often found themselves an afterthought and marginalized.

And the cozy relationship with government rankles those who still experience the state as the welfare worker who cuts off social assistance, the immigration officer who deports, schools that are falling apart from lack of funding or the police who harass and sometimes shoot.

When “gay lib” started in Toronto, something like 66 per cent of the population lived in middle-income areas. But progressive taxation and income redistribution have become a relic of the past.

More than 50 per cent of Toronto now lives in below-average-income areas. The political mantra of tax cuts has meant the wealthy no longer pay their fair share, and the resulting shrinking state has let services like transport, education, public housing and health fall apart for those of us who depend on them most.

Anti-Black racism and the destruction of immigrant services and social programs have all contributed to the redistribution of wealth. The city is deeply divided economically and socially. These divisions are profoundly racialized.

The people I saw at those Pride meetings were from this latter demographic: university students who know their education is not likely to lead to stable employment Aboriginal people and the children of racialized immigrants who know that despite rights protections, the deck is still stacked against them Black and trans people who know what targeted policing feels like. They all experience the world differently from the condo owner in the gentrified downtown.

Their issues are varied: police racism, HIV criminalization, corporate power, the environment, acceptance of gender fluidity, Palestine solidarity, park sex, poverty, immigration and refugees, youth empowerment. Many are involved in organizations where queerness is taken for granted but may not be the focus.

Pride is the annual gathering of our tribes. But as social- divisions widen, the glue of sexual orientation strains to hold us together.

While most of us are grateful for the success of the rights agenda, for a growing number of the new activists, it has clearly not solved the issues they still face every day. Those are the issues they bring to Pride. And through the leadership of groups like BLM-TO and others, they are finding a voice that is making itself- heard, one way or another.