Toronto’s new gay pastor hopes to inspire the next generation 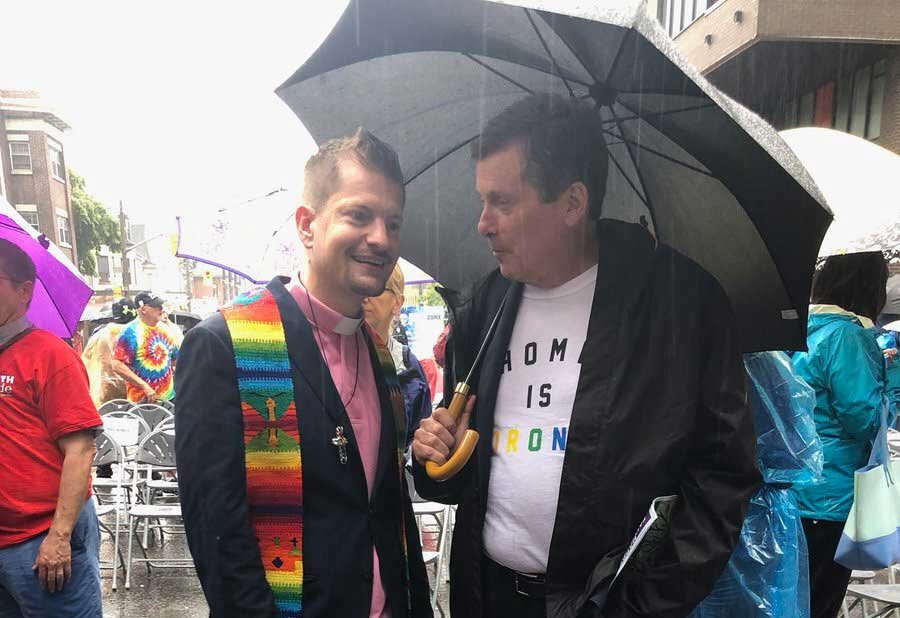 For nearly three decades, the Metropolitan Community Church Toronto (MCCT) has hosted Church on Church Street during Pride. Canada’s largest annual outdoor worship service sees more than 1,000 people (not including those watching the livestream online) gather to hear event founder and pastor Brent Hawkes speak about love and inclusion. This year, however, Church on Church Street was in the hands of a new pastor, Jeff Rock, pushing MCCT into a new era.

“Let’s get soaking wet,” the 34-year-old pastor said as he danced inside a tent during rehearsal.

Rock began his pastorship at MCCT in January. He grew up in Sudbury, attending United Church with his brother and parents.

“I’m very lucky that I grew up in a very inclusive church and heard from the pulpit as a young boy that I was loved as an LGBTQ person,” Rock said, adding that when he came out in high school, he felt supported.

Exactly one year ago, he was still in Red Deer, preparing for his final interview at MCCT. While there, Rock was a minister at the United Church for six years and also ran as a Liberal candidate in the 2015 federal election.

Taking over for someone like Hawkes hasn’t been easy. Many members of MCCT’s congregation not only view Hawkes as their pastor but as someone who saved their lives.

Fraser Murray, a new member of the congregation, was highly impacted by Hawkes. In 1981, while stationed in Edmonton with the Canadian Air Force, he was captured, imprisoned and interrogated for 48 hours because he was gay.

“I spent my last days of the military in that prison, shackled, raped and told that I was a security risk,” he said.

Murray’s chaplain refused to help, but Hawkes did. “He was the only person who tried to heal the damage that was done.”

Despite his deep connection to Hawkes, Murray believes having a new pastor is exciting.

Mayor John Tory also believes Rock will be a positive change for the church and community.

“I’m sure he is going to play his role in his own way,” Tory said. “He is a younger man. He is a different person from a different place, but I think his role will be very similar.”

The appeal to hire Rock was in part his age. In addition to attracting millennials and confronting current issues such as the Black Lives Matter movement and reconciliation with Indigenous communities, he also cares about loneliness among younger generations.

“We are more connected than ever before but I think also lonelier,” Rock said. “Right now in Toronto, there are a lot of isolated LGBTQ and straight seniors who are looking for community.”