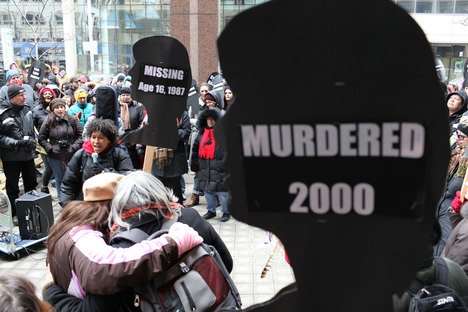 The fifth annual Rally for Missing and Murdered Indigenous Women in front of police headquarters Sunday, February 14, before marching to the Coroner’s Office on Grenville, 1:05 pm.

Tribal rights group Survival International has appealed to Canadian director James Cameron of Avatar fame to join the Dongria Kondh tribe’s fight against UK company Vedanta Resources’ plans for a bauxite mine in Orissa, India. The group says a real-life version of Cameron’s blockbuster movie is being played out in the hills of Niyamgiri. The group’s full-page ads in film industry rag Variety have prompted Amnesty International to weigh in, slamming as “gross human rights violations” Vedanta’s treatment of the Dongria. The Anglican Church has pulled its £3.8 million stake in the company.

The Ontario Science Centre pays its respects to Black History Month with Northern Lights: African-Canadian Stories, on till March 2 (P&G Great Hall). Among the collected artifacts on display is this 1942 shot of a wedding ceremony at the First Baptist Church, formerly on University.

Who Ian Troop, newly appointed CEO for the Pan Am Games.

Gotta ask Does 28 years’ experience in the packaged goods industry mean these Games are going to be more about marketing than city-building?

The former Art Metropole Building at 241 Yonge – now a Money Mart (ick!) – is one of the most elegant structures on the architecturally notable stretch of Yonge between Queen and Dundas Square. In its 70s heyday, the sleek beauty housed Art Official Inc., started by art collective General Idea to support artists’ media projects, including FILE Magazine, which was published out of the location from 1972 to 89. By the time it closed its doors in 97, Art Official held one of the most important archives of artists’ books and video works of art, numbering some 12,000 items, in the country.

NUMBERS OF THE WEEK

53 Percentage of BC residents “excited” about the Vancouver Olympics as opening ceremonies neared last week, according to Ipsos poll

13 Percentage who won’t be following the Games at all.[rssbreak]