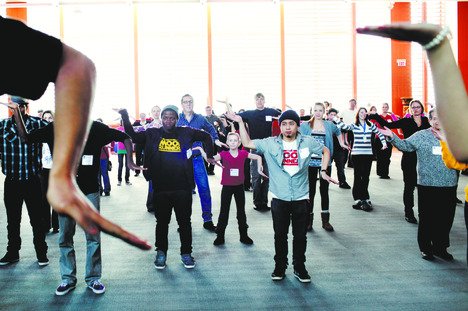 Walking like an Egyptian toward an entry in the Guinness Book Of World Records at the AGO, Sunday, February 28, with dance crews Grand Illusion and For the Funk of It. Watch a demonstration.

Councillor Paula Fletcher apologizes, sort of, for losing it on a heckler at the City Hall budget debate Monday (March 1). Tense times. Check our budget coverage, starting with a defence by Hizzoner David Miller.

Among the modernist gems in the city, the elegant and much-overlooked Fifth Church of Christ, Scientist, by Estonian-born architect Michael Bach, near Yonge and Lawrence (built in 1958), features brutalist architectural stylings and an Italian-inspired campanile, sans bell. 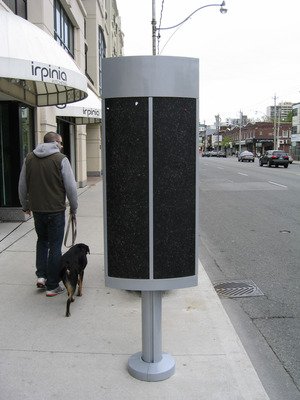 Some of the Astral furniture creations loosed on our streets are looking a little the worse for wear despite the mild winter. We’ve spotted a few bins, like this one near a bus stop in midtown, bent out of shape by the heaving of concrete beneath. The good news: under the city’s contract, Astral is on the hook for repair costs. Photo: Enzo DiMatteo

Is the city’s green fleet running on empty when it comes to reducing greenhouse gases? According to Environmental Defence, the calculations the city’s using to determine emissions are not taking into account the land use impacts of biofuel crops, which are eating up prime agricultural land. Or the fact that our major supplier, Suncor, is also a big player in the tar sands. Time to reconsider that contract? [rssbreak]