Nick Kouvalis resigns from Kellie Leitch campaign – is Leitch next?

It's easy to blame the "cuck" tweet for Kouvalis's exit, but in the wake of the Quebec City mosque shooting, Leitch's campaign has been exposed as little more than a cynical, corrosive play for votes among the worst elements of the Conservative party's base 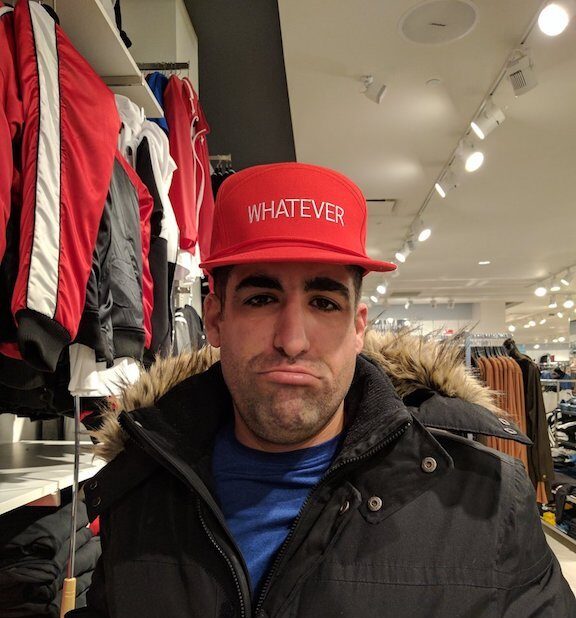 It’s over for Nick Kouvalis. The campaign strategist for “Canadian values” Conservative Party of Canada leadership wannabe Kellie Leitch called it quits last night, resigning from Leitch’s campaign after what can only be described as an erratic time at the helm.

As is usually the case in these situations, Kouvalis had become a political liability. And as such needed to get gone. He knew it. Leitch knew it. Anyone who had been watching his handling of her candidacy knew it. It was hard not to see this coming.

The so-called mastermind of Rob Ford’s successful 2010 mayoral campaign and John Tory’s after that, who was supposed to have his finger on the pulse of the nation, fashioned a campaign strategy for Leitch made in the image of Donald Trump. In the wake of the Quebec City mosque shooting, it’s been exposed as a cynical, corrosive play for votes among the worst elements of the party’s base. (Here’s looking at you, Rebel Media).

The question now is, will Kouvalis ever work in this town again? And how long before Leitch, who’s all of a sudden finding it hard to get noticed with reality TV dragon-turned-shark Kevin O’Leary in the race, drops out?

Kouvalis announced “with great regret” his resignation from the Leitch camp, admitting in a Facebook post that he had become “a distraction to the campaign.” That would be an understatement. To tell the truth, Kouvalis had become unhinged.

His statement makes a vague allusion to his past struggles with alcohol. “It has also become clear to me that the pressures that come with a stressful campaign leadership role are not conducive to my personal wellbeing,” it reads. And this morning, a statement from John Tory states Kouvalis continues to deal with alcohol addiction. Last spring, Kouvalis quit the campaign for a short time after driving his Lexus into a ditch and pleading guilty to a drunk driving charge and paying a fine.

The last straw for Kouvalis came Sunday, when he got into a Twitter fight (there have been a few involving Kouvalis this campaign) with University of Waterloo political science professor Emmett Macfarlane over the latter’s criticism of Leitch’s “Canadian values” screening test for immigrants. Macfarlane is no Liberal troll. In fact, he’s a periodic contributor to the conservative-minded National Post. Kouvalis called McFarlane a “cuck,” a term, without getting into specifics, that someone with a propensity for visiting porn and alt-right websites –someone say like former KKK grand wizard David Duke – might throw around. Kouvalis was forced to “apologize unreservedly” the next day. 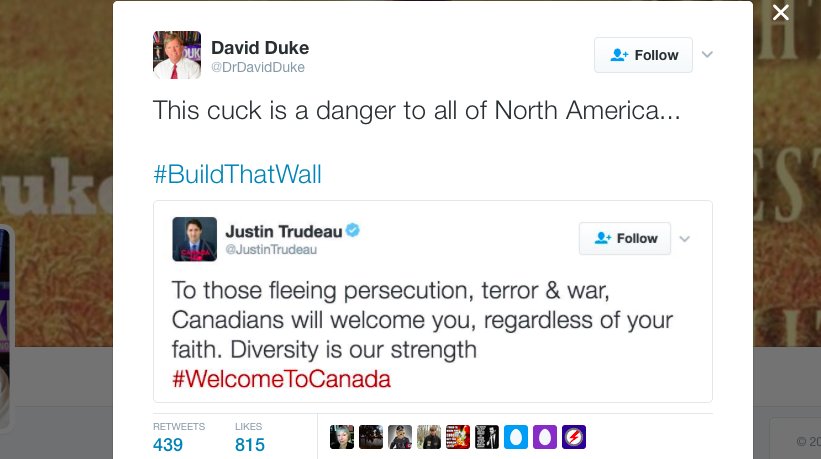 By then, Leitch was dealing with another controversy – news of last Sunday’s mass murder of six Muslim worshippers at a Quebec City mosque. The accused is Alexandre Bissonette, who has since been described as an anti-feminist troll with a liking for Trump (not to mention white nationalist French presidential candidate Marine Le Pen). In other words, the kind of social media know-nothing that the Leitch camp’s “Canadian values” spoutings have been attracting: far-right, anti-Muslim, anti-immigrant, anti-feminist. You need look no further than the comment section of Leitch’s Facebook page for the evidence. A few among them are still entertaining conspiracy theories that there’s a cover-up and a second gunman involved in the Quebec shooting, the so-called man of Moroccan descent in early reports that turned out to be a witness.

Leitch issued what was widely viewed as a hollow condemnation of the massacre. She couldn’t bring herself to mention, for example, that the shooting took place in a mosque. 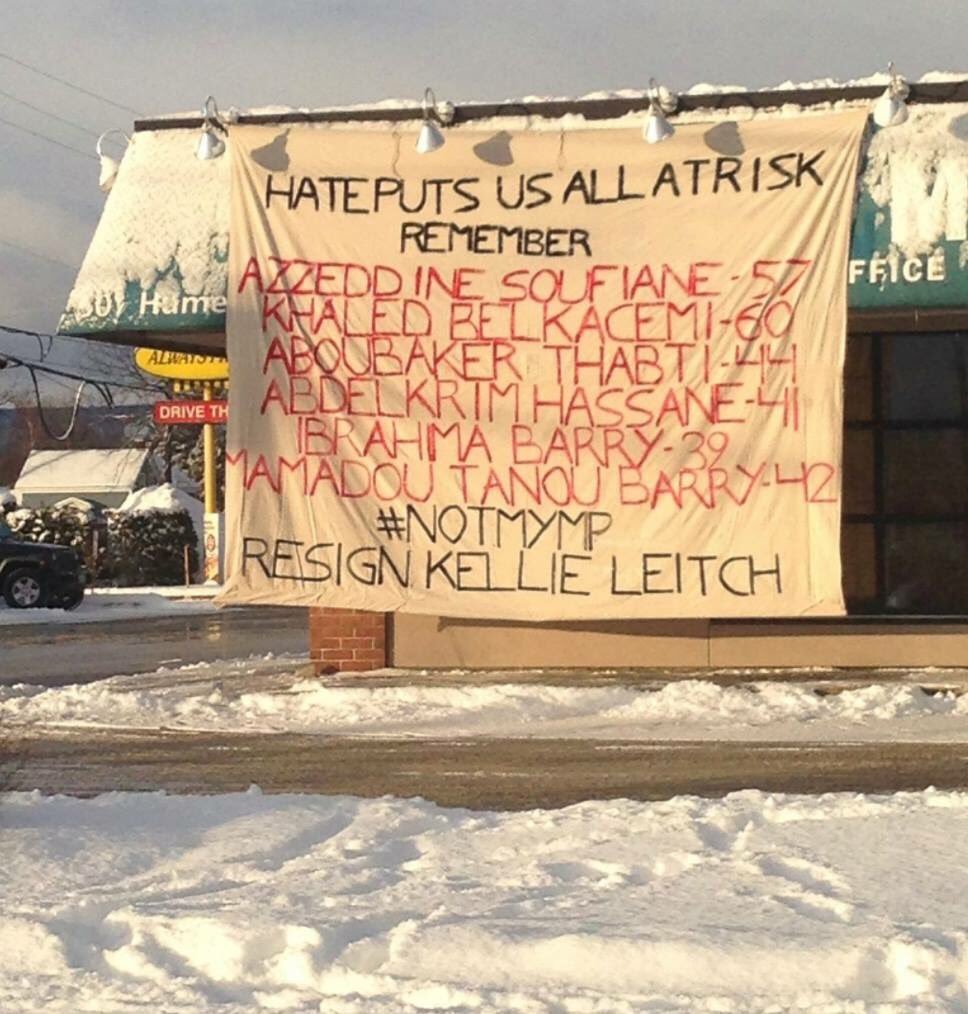 On Wednesday, staffers at Leitch’s Collingwood constituency office showed up for work to find a large banner hanging in front of the building with the names of the six men killed in the attack and the words “Hate puts us all at risk.” The banner also called on Leitch to resign.

Leitch surfaced briefly for an interview with the CBC on Wednesday to respond to the banner. She doubled down, saying her supporters are not racists. And defended Kouvalis, blaming his bad behaviour on the frustration she says her campaign is feeling for being labelled racists over screening immigrants for “Canadian values.” But by then the wheels had already been put in motion for his exit.

It wasn’t just the usual so-called “globalists” and “elites” Leitch likes to attack as being out of touch with average Canadians that were pointing the finger at Leitch over the Quebec City shooting.

Leitch’s CPC leadership rival Michael Chong took aim on Facebook, saying the shooting “was no accident: It’s a direct result of demagogues and wannabe demagogues playing to fears and prejudices.

“The politicians espousing these policies may do it in a genteel fashion that sounds acceptable, but check out the comments on their social media platforms and you will find cesspools of hate.”

Chong didn’t mention Leitch by name, although he was clearly talking about her. “In fact, one candidate for leadership of the Conservative Party has now been endorsed by two white supremacist organizations.” Leitch has said she does not want their endorsements. Too late.

People have clued in to her cynicism. A recent Forum poll put her support among leadership contenders exactly where it was a month ago – right around five per cent. It’s been downhill since O’Leary started sucking all the oxygen out of the room. Leitch has been struggling to get noticed.

For a while, Kouvalis and Twitter were all she needed to run interference and keep up appearances that she was leadership material, despite a thin political resume and fixation on the 18 letters that follow her name owing to her training as an orthopaedic pediatric surgeon. Kouvalis was the star of the CPC race. I mean, if the guy currently occupying the White House can run the world from his Twitter account, then why not a campaign for the leadership of the Conservative Party of Canada?

Kouvalis couldn’t lose for winning, with the resume to match. He has always had a rep as a bit of a dirty trickster and a big head. With Leitch, something a little different seemed to be at work. He was over the edge.

During another one of those Twitter fights over his candidate a few weeks ago, one astute observer said Kouvalis is not as dumb as he tweets. But I gotta wonder, because all of a sudden Kouvalis went all fake newsy on us. He had become a little too enthralled by the possibilities of the politics of havoc being wreaked by Trump south of the border, it seemed.

Used to be that conservatives concerned themselves with the economy and the size of government. Stateside, that hardly seems to matter anymore. With the so-called alt-right it’s all about tearing down democratic institutions, be they government or media “elites.” It’s a political space Kouvalis is comfortable with given his roots on the fringes of the CPC in hard-scrabble Windsor. During the Leitch campaign, he embraced it wholeheartedly employing its tactics of spreading false news. Among the lies: the Trudeau government’s alleged funding of terrorist groups and the Clinton Foundation.

Canadian values do not include telling the truth, it seems.

When Kouvalis was called on the Trudeau antics, he defended his actions, saying he was doing it for kicks, “just to get a rise out of the left.” At least, that was his explanation before changing his tune recently to say it was part of an elaborate plan – “Operation Flytrap” he called it – to weed out, through some social media big data mining hocus pocus, folks allegedly buying memberships to join the Conservative party to vote against Leitch.

But by then who could believe anything he was saying? To be sure, some of his online foolishness had gotten so bad that people had started to openly wonder if he was working for one of Leitch’s rivals on the sly. (Consider that theory my contribution to fake news… or not).

Reveling in his supposed grasp of the dark arts, most of the press couldn’t resist giving Kouvalis and his candidate ink. The mainstream media may have been repulsed by Kouvalis’s tactics, but they couldn’t help watching.

Kouvalis can be a charmer. He’s good at getting noticed. But the campaign he’d crafted for Leitch wasn’t exactly breaking the mold. Kouvalis was doing what many political strategists before him have done: taken their electoral cues from the goings on stateside.

Kouvalis is not so much political guru as salesman with a talent for coming up with a pitch. From “gravy train,” to “SmartTrack” and now “Canadian values,” his knack is for marketing. And what is politics these days other than branding, targeting and voter profiling?

Maybe Doug Ford was right. It was Rob who made Kouvalis, not the other way around. He caught lightning in a bottle, you might say, and managed to parlay that into a good run, at the top of the heap when it comes to sought after strategists. But that’s the thing with politics. One minute you’re a star, the next your head gets too big and poof…

Who knows. If it wasn’t for Rob dropping out during the 2014 run against Tory, maybe Doug, who stepped into the race late to take over from his little brother, might have been able to pull off a win if he’d had another couple of weeks.

So what’s next for Kouvalis? There’s an election in B.C. in May and Kouvalis has helped Christy Clark before. And certainly, there will always be someone in need of a fixer like Kouvalis when a crisis strikes.

But closer to home, the stink from his Leitch misadventure lingers. Pressure is mounting on Tory to distance himself from Kouvalis and not make him part of his 2018 run for re-election. Perhaps the reference in Kouvalis’s statement to resigning for his own well-being will be enough to sell the idea that his health had something to do with his fall from grace. And all will be forgiven come election time.

As for Leitch, it’s all unraveling very quickly. She’s still in the race – for now. But the latest fundraising numbers released by Elections Canada reveal she’s fallen behind Maxime Bernier for the first time on fundraising front, raising $355,121 between October 2016 and December 2016, compared to Bernier’s $586,165.

More to the point, Leitch’s money came from a relatively small number of donors compared to Bernier, some 1,800 to Bernier’s 3,800. Her fundraising numbers are only slightly higher than Andrew Scheer, the former House speaker who boasts the most caucus endorsements of any candidate.

Much will be revealed Saturday, when the CPC gathers for its next debate in Halifax. This time, O’Leary will be part of the mix for the first time. And no doubt the recent drama will make Leitch a target. It’s make or break not only for her leadership aspirations but her political career. And at this point, it’s difficult to see how she drags herself out of the swamp.