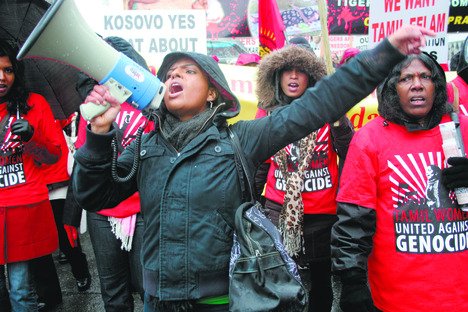 International Women’s Day is around the corner, and with the Harper government trashing equity agencies and the national child care program, there’s no better time for protest. Women Working with Immigrant Women has stepped in to organize a series of events designed to give women’s issues a higher profile. On Saturday (March 6), rally at 11 am at OISE (252 Bloor West), then march at 1 pm to Ryerson University, where feminist orgs offer on-site info sessions. Free. iwdtoronto.org.

Iranian-Canadian journalist and filmmaker Maziar Bahari turned into a major news story himself when he was detained in Iran during the 2009 uprising and forced to “confess” on Iranian TV. Bahari, a reporter with Newsweek, speaks for the first time in Canada since his release at a meeting hosted by Journalists for Free Expression, the Iranian Association at U of T and others, Friday (March 5), 6 pm, in the Sanford Fleming Building, 10 King’s College, rm 1105. $5 suggested donation. 416-515-9622 ext 226.

AMBIVALENT IN THE BURBS

Oh, those burbs – how they bug us. On the other hand, they have shaped our consciousness, and since they’re in the midst of a transition, we’d better decide if there’s something worth saving there. Mourning The Suburb, hosted by Visible City and featuring author John Archer, architectural historian Beatriz Colomina and architect prof Alberto Pérez-Gómez, helps sort out the confusion. Friday (March 5), 11 am to 5 pm. $15-$25. Prefix Institute of Contemporary Art, 401 Richmond West. visiblecity.ca.