NOW MagazineNewsU.S. election 2020: A battle for America’s soul, as well as its future

U.S. election 2020: A battle for America’s soul, as well as its future 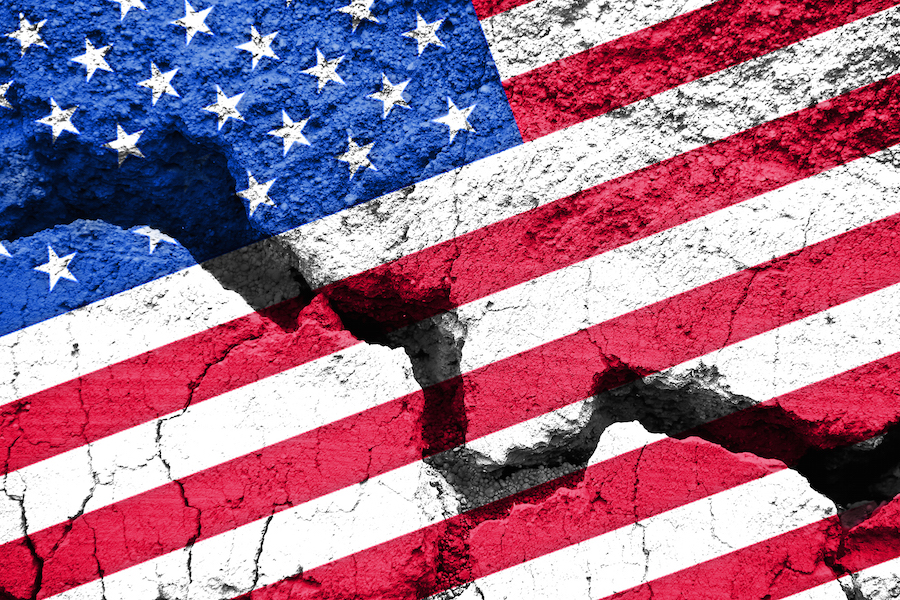 I’ve been thinking a lot about the ending of Fight Club.

Not the ending of David Fincher’s movie, where Edward Norton and Helena Bonham-Carter stand together as the Narrator’s elaborate plan magically resets capitalism, or something, but the ending of Chuck Palahniuk’s novel, which finds the Narrator waking up in “heaven” after shooting himself in the face to destroy his malevolent alter ego, Tyler Durden.

“Heaven” is very clearly a mental hospital, where the Narrator may well spend the rest of his days being cared for by his acolytes, who still believe in his teachings and await Tyler’s return. The movie ends in optimistic anarchy (and a Pixies song); the novel goes for a question mark shaking with anxiety, because while the Narrator may have blown out his own demons, the damage he’s done to the world still remains.

You see where I’m going with this?

America held an election last night, and while more people voted for Joe Biden than have voted for any other presidential candidate in the history of the country – probably enough to carry him to victory, though we won’t know that for a few more days – almost as many people voted for the guy he was running against.

Donald Trump’s presidency has been a failure by every conceivable metric, an incoherent tornado of impulsive policy decisions and blatantly criminal self-dealing from a man who has no interest in governance and cares only about feeding his ego and his brand.

Maybe you could look past the racism, the misogyny, the arrogance, the buffoonery, the mania, the lying. (Tens of millions of Americans have.) But then came COVID-19, and Trump’s catastrophic failure to respond to it, which has played out in excruciatingly slow motion over this nightmare of a year.

A quarter of a million Americans have died; millions more have been infected, including Trump himself and a dozen people in his administration. Trump was hospitalized, pumped full of experimental treatments unavailable to most Americans, and – while still riding high on the steroid cocktail that allowed him to breathe normally – told his aides he wanted to celebrate his recovery by showing up at a rally with a Superman costume underneath his clothes.

Donald Trump is an idiot, is what I’m saying. And he’s managed to convince a lot of others that he should keep being president.

Before the returns started coming in last night, it was still possible to dismiss Trump’s election in 2016 as a fluke: a con man coasting his way to the highest office in the land by cannily exploiting the flaws in the system – and, it seemed, with a lot of help from foreign actors intent on destabilizing the U.S. as a global power.

But the 2020 vote, as close as it is (and as close as it continues to be), reveals something ugly and awful about the national soul: a great many people want to live in Donald Trump’s America.

Trump’s support among white women – already unnervingly strong in 2016, given the whole “grab them by the pussy” thing – actually ticked up this time: from nine per cent against Clinton to 12 per cent against Biden, according to CNN. Trump also saw small upticks in support from people of colour of both genders, which, come on… And a majority of white men still voted Trump, though the majority was a little smaller this time around.

The Democratic party had spent months positioning Joe Biden as a stable alternative to the chaotic Trump. Biden’s decades of public service – most visibly, of course, as Barack Obama’s vice-president – demonstrate his competence and suitability for the office of chief executive. In the midst of a global pandemic, wouldn’t it be nice to have someone at the helm who follows the science and makes hard decisions, rather than someone who struts around on a stage insisting the virus will just evaporate like magic?

Yet, that worked well enough for half the country, which would have voted for any Democratic candidate in order to get Trump out of the White House. Full disclosure: I’m a dual citizen, and I voted Biden. But the other half of the country is now firmly in its own reality, a worldview of constant threat, filtered through Fox News and Facebook and YouTube and amplified by Trump himself, who eagerly repeats whatever memes or lies happen to cross his screen.

In that right-wing world, America’s problems are the result of some amorphous, ever-shifting enemy bent on destroying freedom and subjugating the good people of the heartland – who just happen to be white, no big deal – and forcing either Communism or a Caliphate upon the country. How that happens is always a little vague, but it usually involves conspiracy theories of pedophilia or Satanism or George Soros.

It doesn’t matter. They’ve convinced themselves the end is always near, and only Donald Trump – a real-estate magnate who owes hundreds of millions of dollars to foreign interests that are coming due very soon, and has undermined America in every conceivable way – will stand up for them.

Even as he lies to them about the coronavirus and tells them it’s under control, that masks are voluntary, that hardly anyone is sick, that America is “rounding the turn”, they believe him, because the media they consume reinforces those lies. Trumpism has become a literal death cult, and – as cults will do – it’s hurtling towards a terrible end for its members.

If Biden does emerge victorious at the end of this long count, he’s going to have to deal with that. He’ll probably have to deal with a Republican-controlled Senate, which perfected its slow-walking of legislation and callous disregard for process in the Obama years. The re-election of policy ghouls Mitch McConnell and Lindsey Graham pretty much guarantees business as usual in that department. Biden taking office won’t fix the nation’s problems overnight; the course corrections required to steer out of Trump’s pandemic spiral will take months on their own.

But Biden will be president, and Trump won’t. Kamala Harris will be vice-president, and Mike Pence won’t. Trump’s children and advisers won’t be in positions of power. Stephen Miller won’t be drafting policy. That’s a start.

Trump may be a symptom of a larger disease destroying America rather than its cause, but the first step in treating cancer is cutting the tumour out. The next step is aggressive treatment – and yeah, the metaphor gets a little wobbly here. Maybe the reinstatement of the Fairness Doctrine is radiation, and bolstering education spending is chemo? I don’t know, I’m not a medical professional. Expanding the Supreme Court to compensate for Trump’s mendacious appointments probably counts as immunotherapy, though.

To return to the Fight Club analogy, though: Tyler Durden sold his followers on a lie of independent thought while consolidating power and marshalling a small army of unquestioning followers. But Tyler Durden wasn’t real: he was the product of a delusion, a personality created by someone who felt he had no agency in the world in order to remake it in his image. But that person is insane, and the plan he insists he has is just more chaos.

Fight Club, in both book and movie form, is about the appeal of madness over sanity, and how painful it is for someone to claw his way back to the real world. That’s the struggle America is facing right now, and the election just showed us how many Americans are still on Tyler’s side. They’ll throw whatever bullshit they can at Joe Biden – or whoever takes up the progressive standard – because he threatens their beautiful illusion of supremacy.

It’s just an illusion, of course, and the deeper they dig in their heels the less stable their world becomes. The alternative is waking up in a mental hospital, and having to reckon with the behaviour that led them there.

Anyway, it’s Wednesday morning and they’re still counting votes. Trump, as expected, declared himself the winner, but the news media was quick to qualify that statement as a claim rather than a fact, which was rather unexpected.

Maybe that’s an indication that the national mood is changing, if only incrementally. America might still save itself. I have to hope it does, because the alternative is more noise, more chaos, more death. And surely, at this point in 2020, we’ve had enough of all that.