Village at the centre of tense 78-day standoff between Mohawks and Canadian military in 1990 is once more the focus of simmering land dispute, this time over a massive housing development 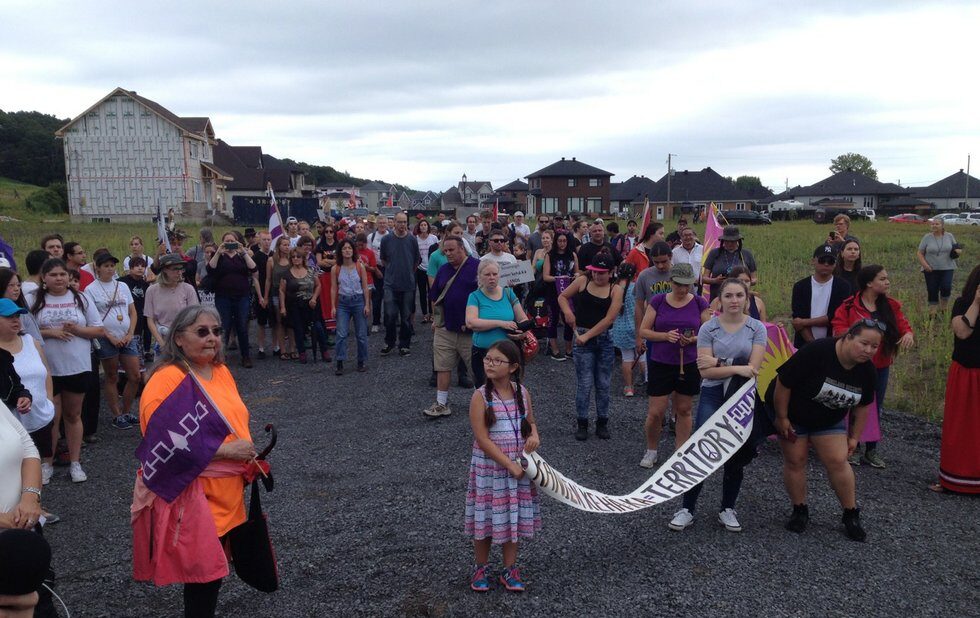 Among the many unresolved Indigenous land rights disputes facing a Trudeau government big on promises, one in a long history of Mohawk resistance is again bubbling to the surface.

At Oka, the village 50 kilometres west of Montreal where a tense 78-day standoff between the Canadian military and Mohawks of Kanehsatà:ke took place over the proposed expansion of a nearby private golf course onto sacred burial grounds in 1990, protests against the construction of 400 homes have been ongoing since the summer.

Land defenders have erected signs near the site reminding residents that the new construction is on disputed territory and taken to social media to document the laying of freshly buried gas lines, felled trees and newly paved paths. These are threats, they say, to the last parcel of common lands belonging to the Mohawks, a wooded area known as The Pines.

Among those fighting the development is Ellen Gabriel, one of the key negotiators during the 1990 confrontations. Says Gabriel, “These are our traditional territories.” 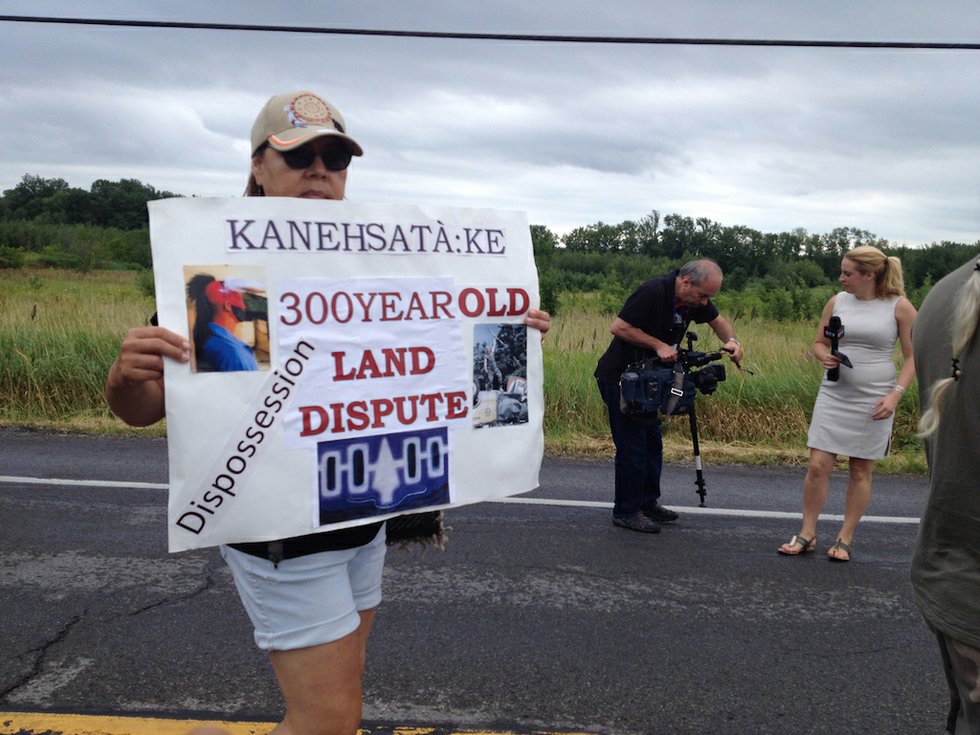 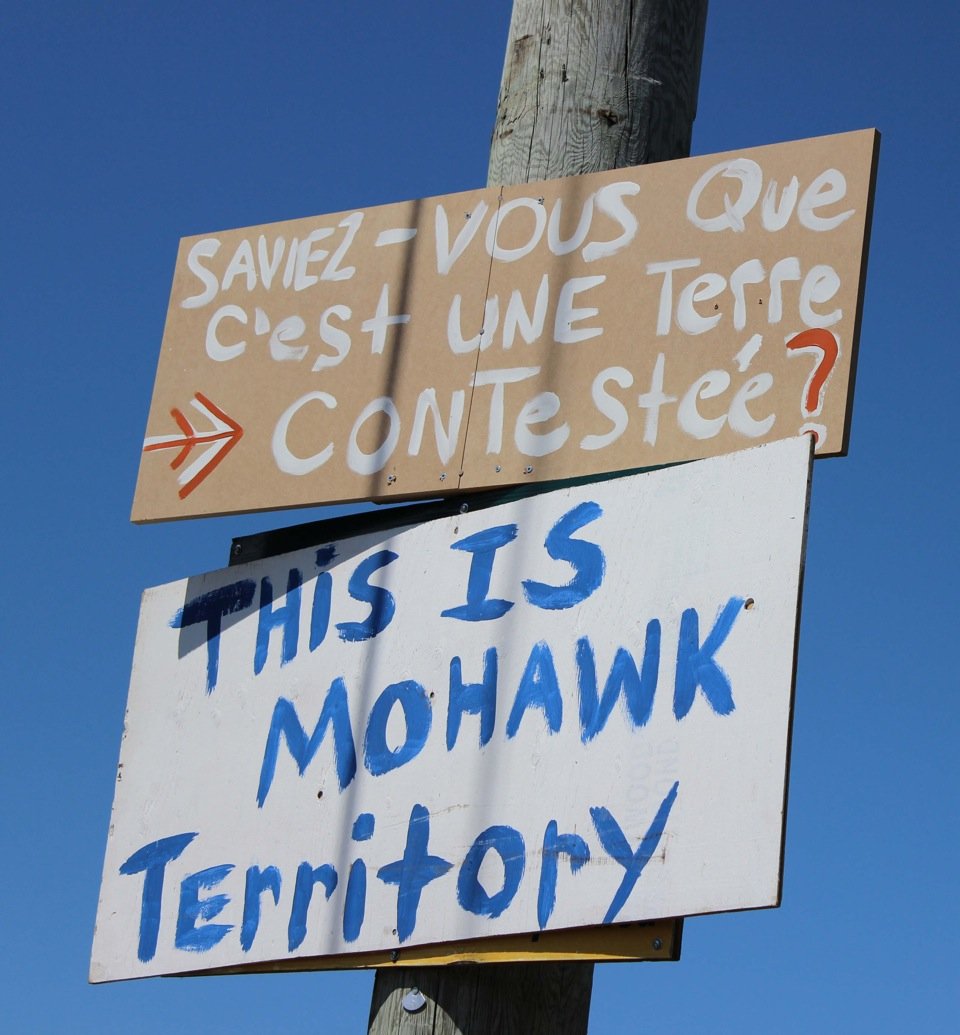 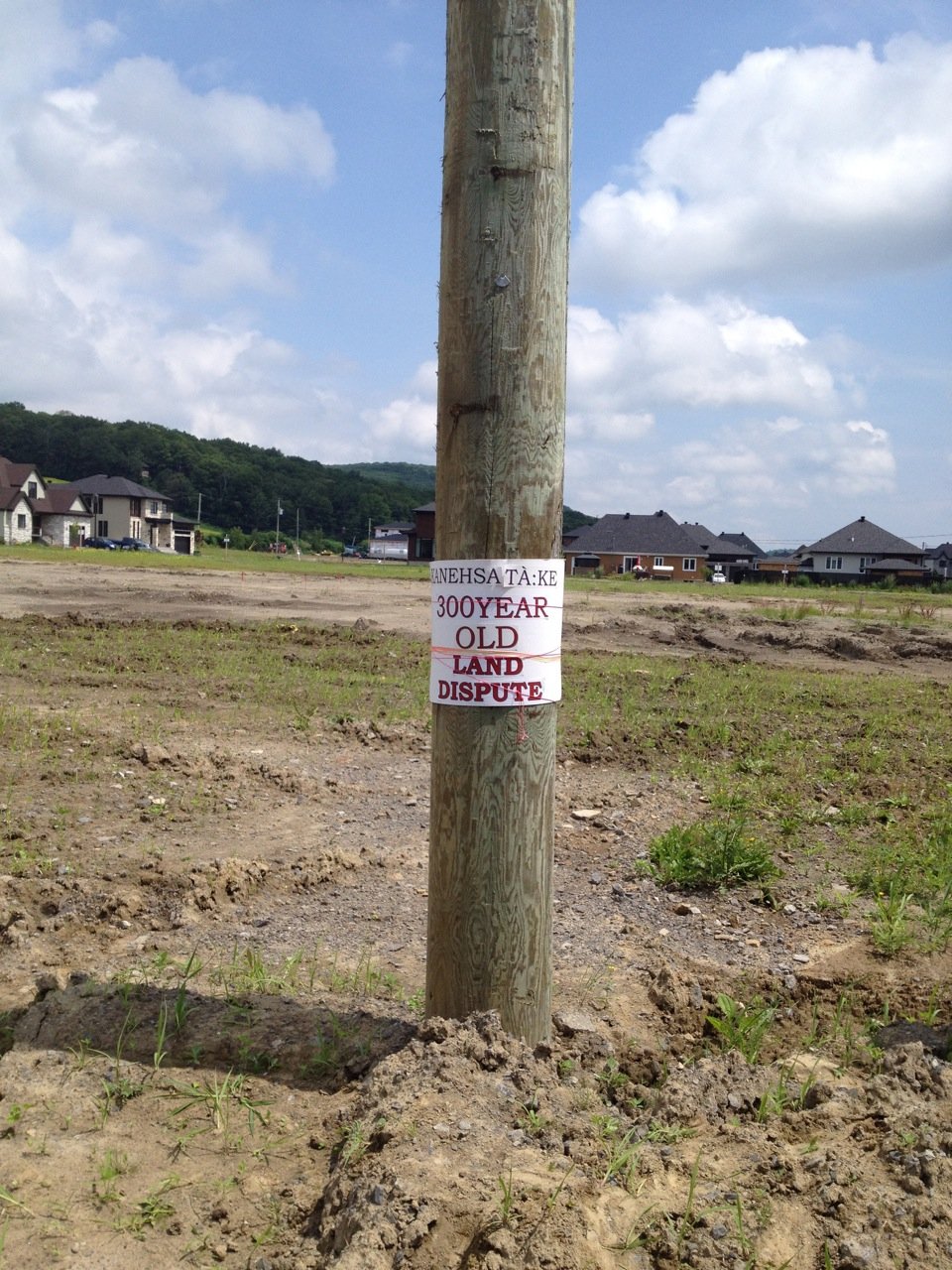 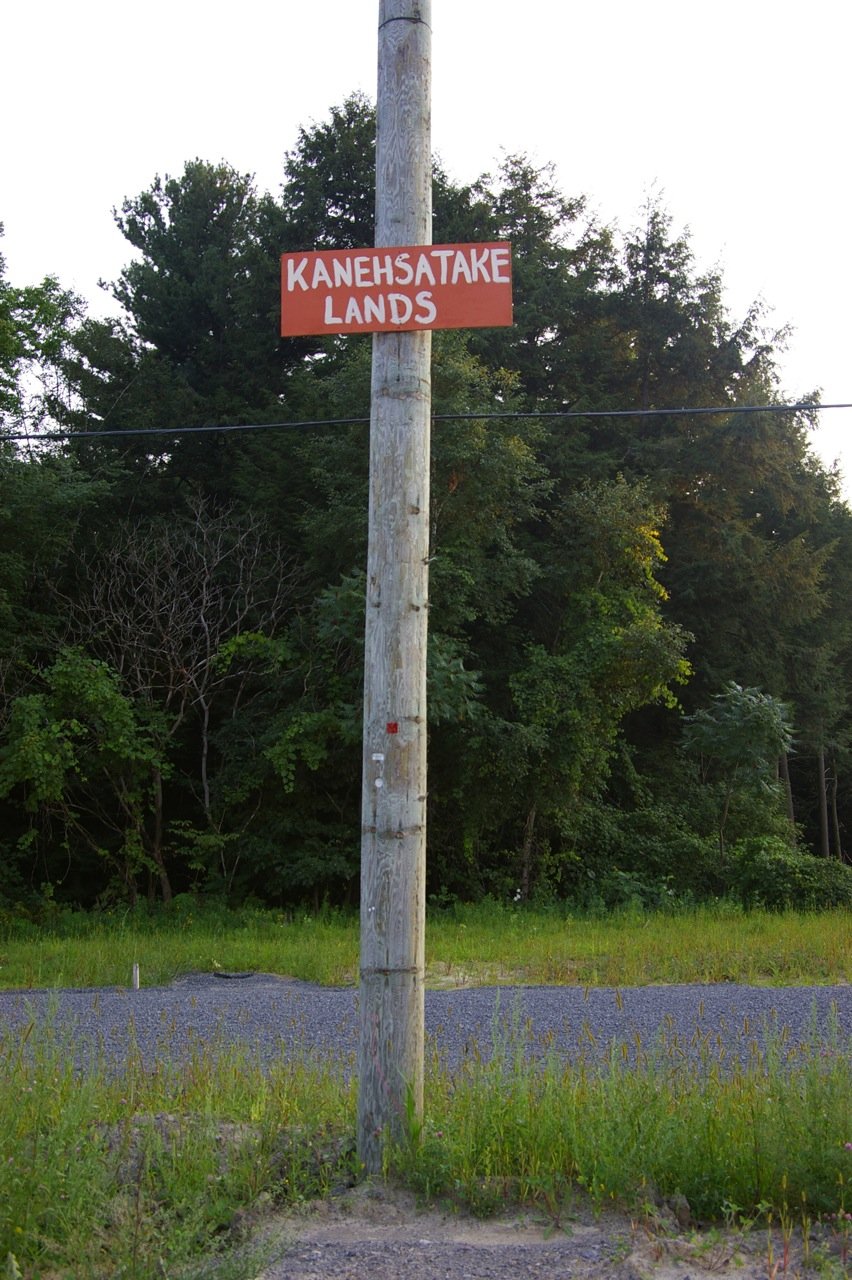 While the “Oka Summer” is often viewed as a singular crisis – thousands of heavily armed, paramilitary Quebec police and RCMP were joined by more than 3,300 Canadian soldiers – it was but one of many moments in a centuries-old history of Mohawk resistance over land claims dating back to first contact with Europeans. In 1717, French King Louis XV granted ownership of some 165 square kilometres of Mohawk territory (Lake of Two Mountains, or  Kanehsatà:ke) to a Roman Catholic seminary over Mohawk objections. Repeated Mohawk claims to the territory were rejected over the next 270 years, including by the federal government in 1986.

Complicating matters with the latest housing development are jurisdictional issues. Ottawa is claiming it cannot interfere with provincial and township decisions.

Since 2016, Gabriel and the Longhouse matrilineal clan society entrusted with land stewardship at Kanehsatà:ke have been firing off letters seeking an urgent meeting with Minister of Crown-Indigenous Relations and Northern Affairs Carolyn Bennett. But she appears reluctant to get involved. Bennett’s press secretary, Sabrina Williams, writes in an email to NOW that “we don’t have jurisdiction, all we can do is facilitate discussions.” While Bennett’s office says it is looking for a suitable meeting date, Gabriel is concerned that the federal government “wants to have another conflict… otherwise they would have done something by now to seek a moratorium on development.”

Gabriel says a major contention in the dispute is federal legislation forced on the Mohawks in 2001, the Kanesatake Interim Land Base Governance Act, a law that forcibly extinguished Aboriginal title to their lands. “They like to call it the ‘harmonization of municipal bylaws with Oka’ to make it sound sweet,” says Gabriel.

She says the land in dispute technically remains “for our benefit and use, so we get certificates of possession, but that doesn’t mean we own the land according to Canadian law.”

The federal government did not seek or receive consent from the Longhouse for enactment of the legislation, as it prefers to deal with Indian Act-created band councils, which tend to be more compliant with federal prerogatives. (Mohawk Council Chief Serge Simon, who did not return numerous phone messages and email requests for comment from NOW, reportedly told CBC Radio-Canada that he supports a moratorium on construction of the new housing development.)

Gabriel explains, “The band council is a creation of Canada. There’s nothing traditional or democratic about it.”

A new space for dialogue could be created, however, depending on the outcome of the November 5 municipal election in Oka. If elected mayor, Julie Tremblay, a former school board president, hopes to change not only the tone, but also the substance, of relations with the Mohawks. She’s campaigning with the knowledge that many non-Indigenous residents oppose the development because it would seriously alter the small village spirit that marks Oka.

“I actually saw the trees coming down when it was first happening,” Tremblay says, adding “the mayor lacked sensitivity because he knew very well about the Mohawks being concerned. He didn’t advise anybody.”

Tremblay agrees that the Longhouse “is part of the solution. We need to respect that in the Indigenous population, lots of people still rely on the Longhouse to make decisions, so they need to be at the table.”

Although Mohawks do have a right to vote in the Oka election, Tremblay, concedes “most don’t want to because it is associated with the colonialist system. But they are a fourth of our population. Even if they don’t vote… they need to be consulted and know what’s going on.”

Tremblay says that while “we should stop further development until the Mohawks are consulted, I also want to push the federal government to reach a final agreement so it’s clear for everybody. Right now, we live with the problem but have no power to do anything about it.” 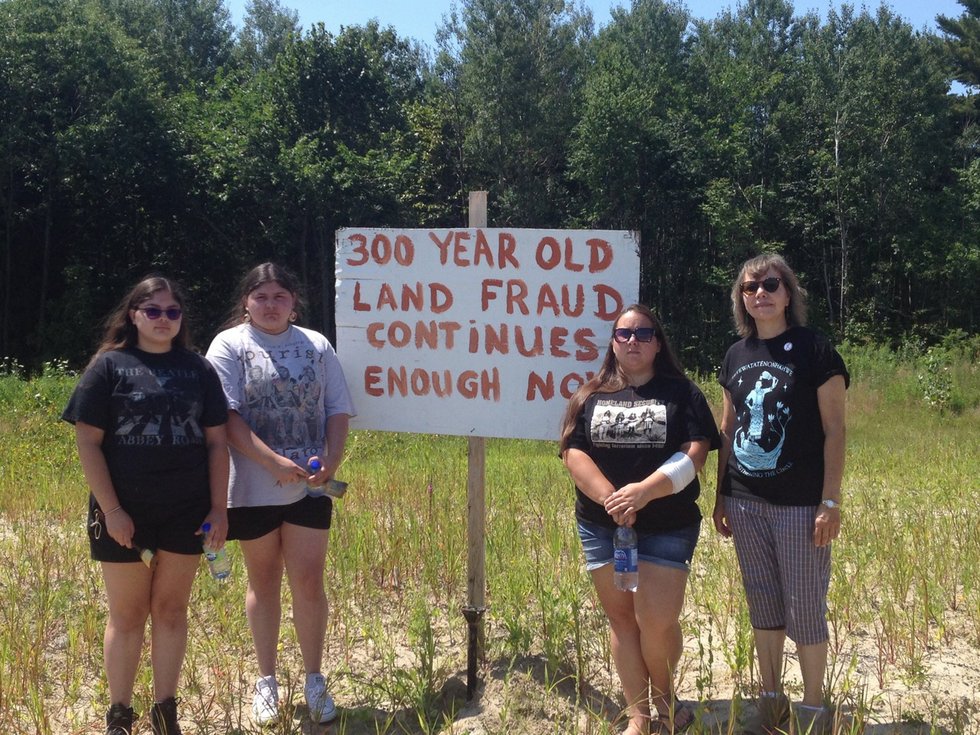 In the meantime, a new generation of land defenders is getting involved in Kanehsatà:ke. Twenty-four-year-old Caitlyn Richard, a First Peoples studies student at Concordia, says she learned about the 1990 crisis in high school.

“I never pictured myself as a protester or activist,” she says. “But going and seeing all the trees that had been demolished [to make way for the housing development] was eye-opening and terrifying. It looked like a natural disaster had come by and wiped out everything.”

She says some residents of the new homes “are younger families with children who didn’t know that this is where 1990 happened or that there were Mohawks living nearby. We explained why we’re here, that this is our territory, and they get it. Some have said they understand and support what we’re doing.”

The new residents also have nothing to fear. Gabriel is clear that “we do not intend to take away anyone’s home or ask for their keys.”

But Gabriel is still waiting for a meaningful signal beyond the pen of politeness that seems to be Bennett’s métier.

“People say they don’t like Donald Trump because he is a bully, lacks morals and ethics, and defies the rule of law, but that’s what we as Indigenous peoples have been up against since the creation of the Indian Act. That is the kind of people we face on a daily basis through Canadian ministers and bureaucrats.” 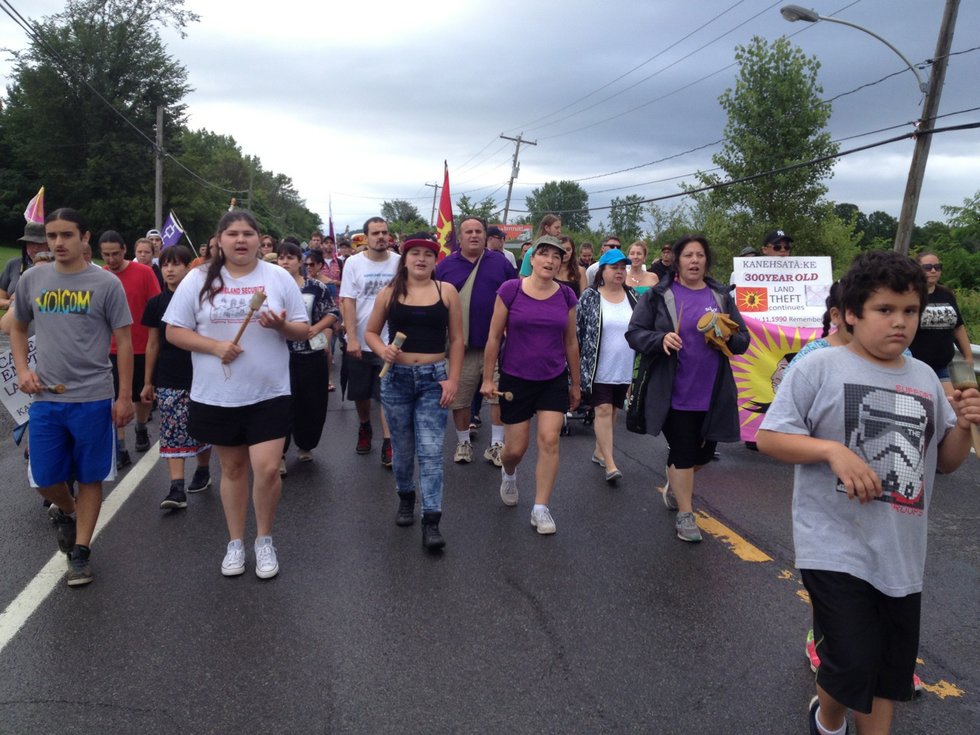