On immigration, Doug Ford is full of baloney 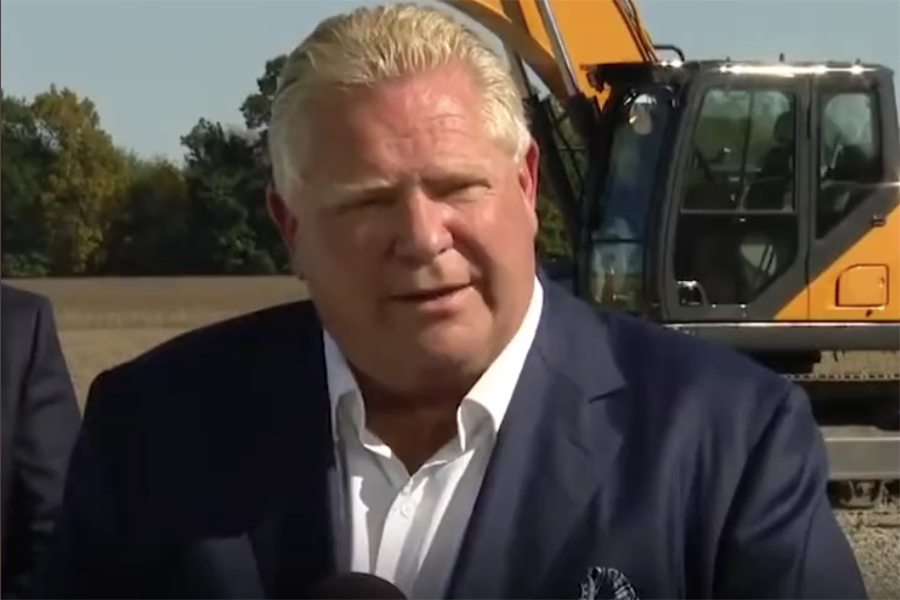 Ontario Premier Doug Ford is refusing to apologize for derogatory comments he made during a press conference Monday suggesting immigrants are coming to Ontario “to collect the dole and sit around.”

Why is anyone surprised? The premier has a track record of trading in xenophobia. He’s practically made a career out of it.

His comments on Monday are similar to the dog whistle he was blowing on immigration during the 2018 campaign (more on that later). How soon we forget.

Attacking alleged welfare cheats is one of the oldest tropes in his playbook. While his brother was infamous for his racist rants when he was mayor, Doug was also known for his penchant for attracting deplorables to his cause.

His most recent comments and subsequent denials are more BS. But make no mistake, they’re calculated.

Ford could simply have said “Sorry if I offended anyone…” and defused the situation. Instead, he doubled down when he was asked to apologize in the Legislature on Tuesday.

Come to Ford Fest, he said, and see for yourself. That’s the thing about veiled racism. In Ford’s case, it’s wrapped in a white saviour complex.

Here are the facts: The majority of newcomers to Canada are skilled workers. It’s a requirement to get into the country. Those that don’t have a job lined up have to show the financial ability to support themselves. They’re here to earn money so that they can sponsor their families back home. Welfare ain’t an option, bud. It isn’t even available to most immigrants. It’s all spelled out very nicely right here.

But you can expect more such prattle from Doug as we enter election season and the premier “For The People” attempts to solidify his base (and other supporters who need someone to demonize for their sorry lot in life). Check out some of the “folks” defending Doug on social media if you don’t believe me.

Just as revealing as Ford’s words on Monday was the tone. His wasn’t a matter-of-fact remark that was taken out of context. It was a declarative statement.

Ford claimed later there is “no one more pro-immigrant” than he. Mirror, mirror, on the wall….

I worked for a guy just like Doug when I was in high school and trying to earn a few bucks to put myself through college and university. Which is to say, a guy whose bigotry was as bland as the baloney sandwiches with mustard on white bread he ate for lunch.

His name was George. He was the site supervisor for the custom-home builder my dad worked for. He was a jocular sort, at least on the surface.

Just like Doug, he was what you might call an “old-stock Canadian” but he had a rather contemptuous view of immigrants. As long as they knew their place he was all good. George wasn’t particularly smart. His views stemmed from the simple fact he had the privilege of being white and being born here. (Also, his last name didn’t end in a vowel.)

George hired me to work as part of my father’s crew. I was 17. He assumed (incorrectly) that I wanted to follow in the old man’s footsteps. So unbeknownst to me he hired me under a carpenter’s apprentice program offered by the federal government. I only discovered this after my first pay cheque – $117 for 44 hours of work. I was gutted.

By hiring me as an apprentice, ole George would only have to pay me $2.50 an hour compared to the $8 an hour others on the crew were starting at. Clearly, George didn’t think that highly of my potential.

But his assumptions about my station in life were more revealing of what they said about him. It was a lot like the attitude encountered by other kids I grew up with in the neighbourhood who were streamed into technical instead of academic courses in high school because, well, it was assumed that a professional career was beyond them.

But I was more pissed at my father for not taking a stand than I was at George. Funny, huh? That’s the immigrant inferiority complex talkin’ right there.

I’d seen the way he and his fellow workers were forced to swallow their pride to survive. There were no benefits to be had. No sick days. They were new Canadians, recent citizens too afraid to rock the boat. It was as if they had been conditioned to be grateful just for having a job. And they didn’t want to chance losing that by exercising what rights they may have had.

This is the reality for most immigrants – worse still for people of colour – not Ford’s version of opportunists looking to get on “the dole” (who even uses that word anymore?).

But Doug wouldn’t know about those kinds of challenges. When he dropped out of college after one year, his old man handed him the keys to a successful multimillion-dollar family label business.

Doug has been proud to boast in the past that many of the new Canadians that worked for his father now have family members that work for him. It’s boosted his populist brand.

But on the campaign trail in 2018, he offered on the question of refugee resettlement in Ontario that the province should “take care of our own” before opening its doors.

Ford also referred to asylum seekers as “illegal border crossers.” His messaging on multiculturalism and immigration has attracted white nationalists. Heck, he’s even posed for photos with them.

It’s a familiar formula Ford is using – it was made popular by a guy named Trump.

It’s born from ignorance. It’s veiled racism. And it all makes you wonder why old-stock Canadians like Doug are not filling the trade jobs so badly needed in Ontario. Clearly, they think it’s beneath them. I throw a mean hammer to this day, but it’s no thanks to George.

3 responses to “On immigration, Doug Ford is full of baloney”