"If you’re a gay person in Orlando, do you still go out on Friday and Saturday? Do you bring a gun? Do you look at the exits?” 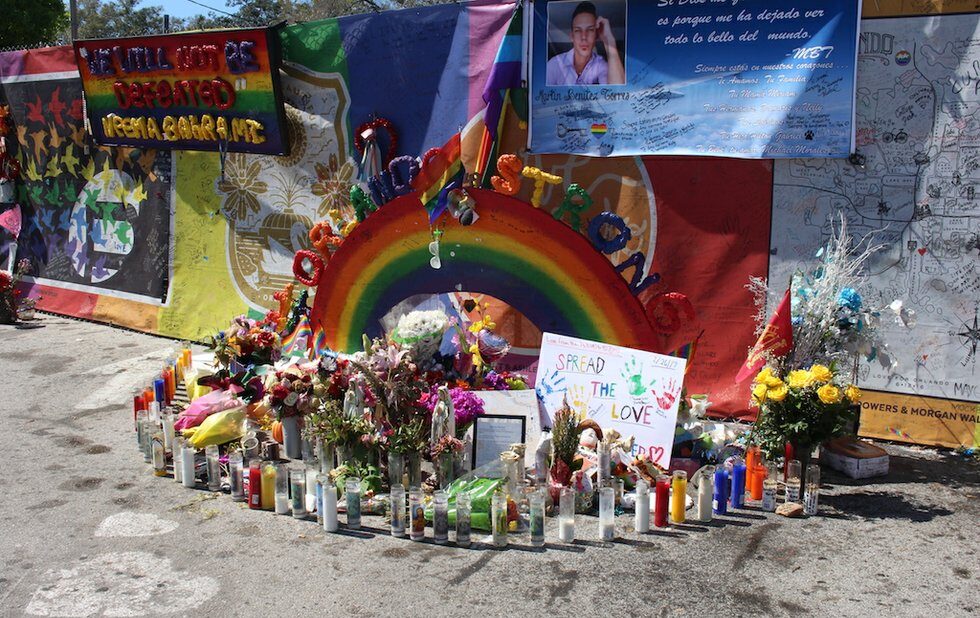 Orlando, Florida – It’s impossible to escape reminders of what happened at the Pulse Nightclub on June 12 last year. No matter where you go in Orlando, there are reminders of the night lone gunman Omar Mateen killed 49 people in the popular gay club.

Restaurants have banners over their bars commemorating the victims, and employees at local businesses wear “PULSE EMPLOYEE” shirts in solidarity. Local bars have frequent “Pulse nights” where Latin drag performers pay tribute. Even popular tourist attractions like Universal Studios and Disney are plastered with rainbow stickers. And the Orlando Science Center has a rainbow bridge adorned with origami hearts containing written messages of love.

The nightclub itself is a monument, draped in rainbow tributes to the dead. Messages written in permanent black marker cover the rainbow canvas surrounding the club, obscuring the structure from view. People gather night and day to pay their respects and grieve for their neighbours. Gay couples hold each other and cry as they read messages written about lost friends, members of a community that is too familiar with violence and targeted hatred.

The tragedy gripped a nation and attracted international media attention for days. Stories from the queer community and how much we still have to fight for took centre stage. An outpouring of love, acceptance and positivity was felt from those outside the LGBTQ community. Hashtags like #KeepDancing, #LoveIsLove and #PrayForOrlando were everywhere, and it seemed the entire world was on our side.

But one year later, the rest of the country has seemingly moved on.

Many thought equality had been achieved after same-sex marriage was legalized across the U.S., almost a full year before Orlando happened. The U.S., however, has elected a president now trying to undo decades of progress for the LGBTQ community.

From appointing opponents of same-sex marriage to senior cabinet positions and choosing a vice president who may support conversion therapy to failing to acknowledge June as Pride Month, speaking at anti-gay rallies and removing data collection on LGBTQ communities in the census, Donald Trump has made it very clear that we do not matter.

Even Trump’s tweets in the aftermath of the Pulse shooting showed his complete disregard for the victims, serving instead as a vehicle for his Islamophobic views.

Greg Griffin, development director at the GLBT Center of Central Florida, which handled much of the response to the shooting, says it takes work to remind the world of why Pulse is important in the current political climate.

“We’re a stronger community now, but there’s always something on the horizon. It’s up to the people closest to the tragedy to keep the memory alive.”

Anti-gay violence has seen an uptick stateside since Orlando.

Barbara Perry, an expert on hate crimes at the University of Ontario Institute of Technology, says of more concern “is that violence against the gay community tends to be the most violent form of hate crime relative to [attacks on] other communities.”

Part of the problem, Perry argues, is social media and other online forums where hate speech can be extreme.

“It can contribute to a broader environment in which all forms of violence become acceptable and normalized,” she says. “The language itself is so brutal, negative and stigmatizing that it can reinforce some of the stereotypes and prejudices that people have, making them more willing to act on their sentiments and hostility.”

Orlando Torres, a club promoter in Orlando, was one of the 53 people injured at Pulse that night. He also believes social media can exacerbate homophobic and transphobic sentiments.

“Bullying comes from social media now,” Torres argues. “It will reach the weak-minded, the walking time bombs. Plus, there are copycats when things like college shootings happen. So it reaches these people who say, ‘I’m going to do this, too.’ It’ll never stop happening.”

Michael Slaymaker, president of the Orlando Youth Alliance (OYA), a group dedicated to providing a space and resources for young gay and trans kids, is also the founder of the Orlando Anti-Discrimination Ordinance Committee, which works with local governments to pass legislation to protect LGBTQ people.

He says such laws are important because they “validate” LGBTQ community members. He notes that same-sex marriage legalization has contributed to increased visibility and to a lower suicide rate among gay youth.

But “many laws are not passing because nobody brings them up. So we bring them up.”

At OYA, Slaymaker and other staff work with kids who were at Pulse the night of the shooting. It was the only gay club that had 18-plus admittance (the drinking age is 21 in Florida) and where they could celebrate their queerness without judgment. Many of them left only 30 minutes before the shooter arrived.

At OYA group meetings, Slaymaker says they try to bring up the conversation about Pulse at least once a month.

“It’s important to remember. We celebrate every birthday and holiday. We have to learn to deal with what happened,” he says.

Orlando Sentinel news editor Janet Brindle Reddick was on the job as the story was breaking. She says Pulse should be a lesson for the rest of the country, one that some may not be ready to learn.

“Some families didn’t even come to claim the bodies because their dead were gay,” she says.

Reddick cites a lack of coverage of queer issues in mainstream media.

“Do we have enough reporters covering gay issues? No. Are we trying to do better? Yes! But with dwindling resources, it’s hard.”

She asks, “If you’re a gay person in Orlando, do you still go out on Friday and Saturday? Do you bring a gun? Do you look at the exits?” Under a Trump administration, she says, it’s “a scary time. As we’re speaking, trans bathroom bills are being debated.”

As Reddick explores these questions, the queer community of Orlando continues to show solidarity in the face of what could be crippling fear. Gay clubs Parliament House and Southern Nights are packed night after night. People dance and laugh and toy with gender and sexuality in spaces that encourage them to. Despite life under a president who’s actively working to erase them, the queer citizens of Orlando don’t flinch or hide.

The city of Orlando held a one-year anniversary service today (June 12) in a park downtown mere minutes from Pulse to remember the importance of tolerance and the need for progress on LGBTQ rights.

As for the rest of the world, will we remember, too?

Mike Ott is a Master of Journalism student at Ryerson University.