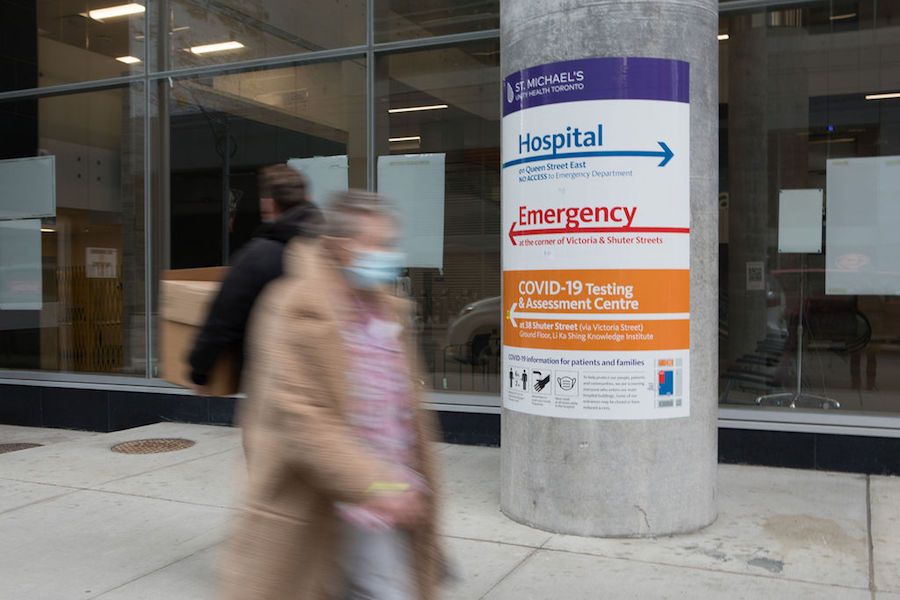 Twenty-five of today’s deaths are long-term care home residents, bringing the total number of long-term care resident deaths in the province to 3,162, according to provincial data.

The virus has now killed a total of 5,340 people in Ontario.

Another 3,212 cases resolved in the past 24 hours, bringing the total number of active cases in the province to 28,618.

Hospitalizations have dropped to 1,632, but the number of intensive care COVID-19 patients rose to 397. Of those, 281 are on ventilators.

Medical labs have processed more than  73,800 tests in the past day. The testing positivity rate has risen to 4.9 per cent.

On Friday, pharmaceutical giant Pfizer said it will temporarily reduce shipments of its COVID-19 vaccine to Canada by half this month.

Prime Minister Justin Trudeau said the delay is due to the company increasing manufacturing capacity in Europe.

Pfizer’s move will “not impact our goal to have enough vaccines available by September for every Canadian who wants one,” Trudeau said during a press briefing in Ottawa on Friday.

In response, Ontario has updated its vaccine protocol to delay the timeframe in which phase one vaccine recipients will receive their second doses.

Chief Medical Officer of Health Dr. David Williams said in a statement on Saturday that long-term care home residents, caregivers and staff who received the first shot of the two-dose Pfizer-BioNech vaccine will now receive their second shot in 21 to 27 days.

All others who received the Pfizer vaccine will get their second shot within 21 and 42 days.

The delay does not impact people have received first doses of the two-shot Moderna COVID-19 vaccine.

In good news, Toronto has announced that immunization clinics have been held at all 87 long-term care homes in the city. Ten of those homes are city-run.

More than 90 per cent of city-operated long-term care home residents have now been vaccinated with first doses.

Chris Lazongas, a physician at the Scarborough Hospital, said on Friday that COVID-19 patients are being sent to Kingston and Peterborough for treatment due to lack of beds.

“This absolutely NOT our usual winter surge,” he said, adding the patients would be flown to Kingston as soon as the hospital could secure a helicopter.

“Scarborough ICUs continue to be over capacity despite many patients transferred to other parts of Ontario for weeks,” he tweeted. “Much worse than I’ve seen before in my 10 years here, and we’ve increased ICU beds substantially but still can’t keep up.”

Scarborough patients are also being sent to neighbouring Oshawa and Ajax, he added.

NOW has reached out to the Scarborough Health Network for further comment.

Modelling data released by the province earlier this week predicted ICU occupancy hit 1,000 beds by early February in the “most severe, but realistic scenarios.” Daily deaths are expected to double from 50 to 100 by the end of February.

The province has extended the Reopening Ontario Act (ROA) for another 30 days. The move means most emergency orders created under the legislation will remain in effect.

The orders, which were set to expire on January 20, will now last until February 19.

“Extending these orders ensures the necessary tools remain in place to help respond to the disturbing increase in COVID-19 cases and deaths, and provide safeguards for Ontarians, especially our vulnerable populations,” said Solicitor General Sylvia Jones in a statement.

Under the law, the orders can be extended for up to 30 days at a time.

The rules include limits on public gatherings, business closures and protocols to help manage outbreaks in health-care settings and long-term care homes.

The ROA is separate from the stay-at-home order that took effect on January 14 under the second state of emergency that Premier Doug Ford declared on January 12.

The stay-at-home order, which comes with beefed up enforcement capacity for bylaw inspectors and police forces, falls under the Emergency Management and Civil Protection Act.