NOW MagazineNewsOntario Election 2018: Just what kind of NDP government would Ontario get?

Ontario Election 2018: Just what kind of NDP government would Ontario get?

As voters grapple with the prospect of the NDP forming government can the party continue its momentum or has it peaked? 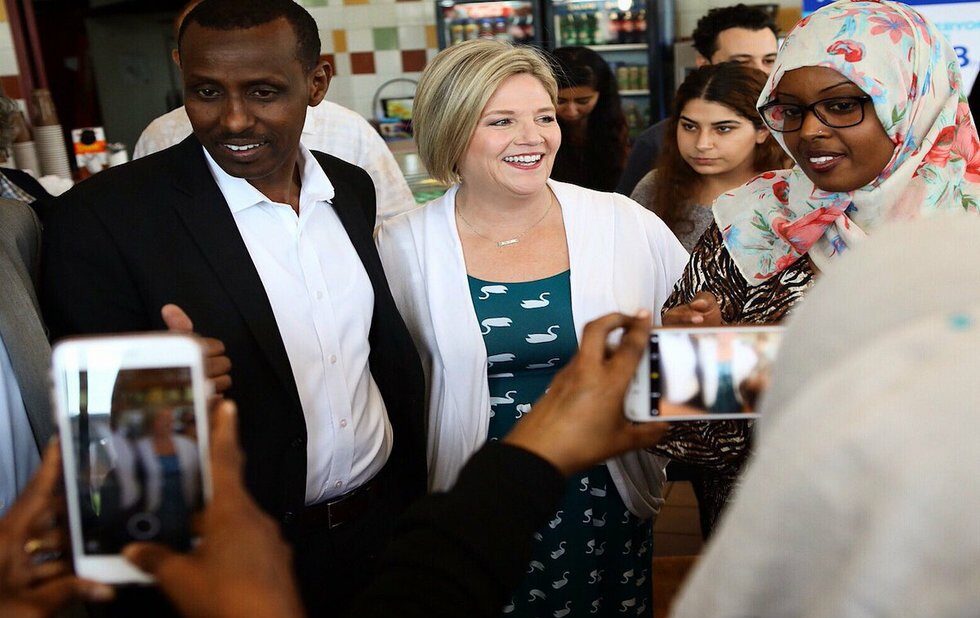 The NDP can be forgiven for getting excited about recent polls showing them ahead of the PCs and within a hair’s breadth of forming government. It’s a tantalizing prospect for long-suffering party supporters in the current climate of change. But vote distribution being what it is for the NDP, a Jack Layton-like wave would be required to pull off a win.

Like Layton, Horwath has promised to do politics differently, and the message seems to be resonating with voters. Horwath has looked the part of a future premier. But Sunday’s leaders’ debate also exposed some soft spots in the NDP’s roster of candidates and its platform – in particular, the $1.4 billion error in its accounting, which means the NDP would have to run a deficit for longer than is being advertised to deliver on their promises.

On that front, the party hasn’t completely exorcised the ghost of Bob Rae, the last (and only) NDP leader to serve as premier in Ontario. Horwath tried to joke about that at Sunday’s debate by noting that Rae is now a Liberal. That one went over like a lead balloon.

With the NDP’s surge has come greater media scrutiny. The PCs have gone full frontal with attacks on so-called “radicals” and “extremists” in the NDP fold in an attempt to claw back some of the support that has deserted them for the NDP. Horwath has been put in the position of having to apologize for the past actions of some – it’s never a good look when you have to disavow in front of a live television audience what a candidate may or may not have said about Hitler in a years old meme.

But while the PCs’ attacks on the NDP have come off sounding a bit hysterical – Horwath characterized them during Sunday’s debate as fear-mongering – they have raised an unavoidable question. What kind of NDP government will Ontario get should they win power?

Liberal leader Kathleen Wynne has ventured that it would be a deeply ideological one beholden to unions. The Trump administration’s move this week to impose tariffs on Canadian aluminum and steel provided a test for Horwath.

Rae was dogged by similar questions. The Rae government passed some of the most sweeping labour legislation in the country, but faced with rising debt and a recession, ultimately broke their social contract with unions that led to the party’s defeat to Mike Harris in 1995.

PC leader Doug Ford has raised the specter of companies pulling up stakes and leaving the province should the NDP win. That hasn’t been the case in other NDP-run provinces in the country and wasn’t the case under Rae.

But the list of NDP promises is an expensive one – free university education, pharmacare, dental care and $12-a-day childcare, billions to fix schools and the hiring of 4,500 nurses in the government’s first year, among other pledges. How much of it they will be able to deliver will require setting priorities.

Wynne’s Liberals provide a lesson, ironically enough. They have pursued an activist agenda while in office, but have had to borrow money to do it, plunging the province into record debt. Now they’re facing the consequences with an angry electorate convinced they’ve mortgaged our kids’ future. Some unpopular choices will have to be made by an NDP government.

As Rae wrote this week in Maclean’s about his tenure, “Governing taught us the lesson that there are often no easy choices.”

Until then, however, there’s still an election to win. On that front, the NDP have been on the offensive, with Horwath taking her campaign into several Liberal strongholds in Scarborough  to capitalize on the party’s momentum. From the outside it looked like the NDP was engaging in a little gamesmanship. (The party finished no better than third in five of six races in Scarborough in 2014, and a distant second in the other.) Horwath followed forays in Liberal ridings with a visit to Ford’s riding in Etobicoke North earlier this week. Clearly, there are gains to be made for the party outside familiar territory in Toronto’s downtown core and, increasingly, the 905.

But as Horwath – and voters – grapple with the prospects of the NDP forming government, another question looms: can the party continue its momentum or has it peaked?