Election night seemed as good as any to get out of town, given the prospects of a Doug Ford win.And. 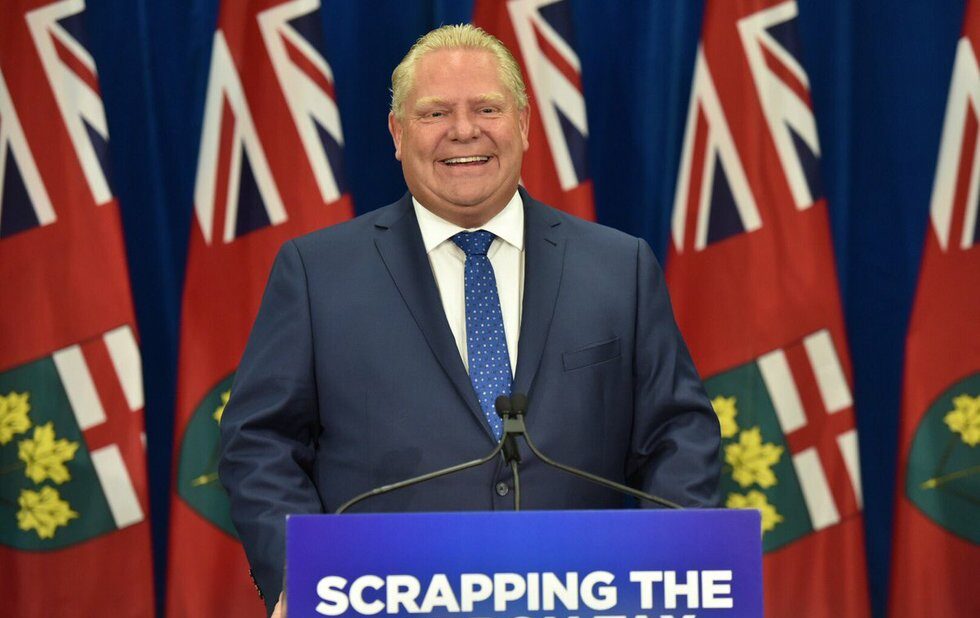 Election night seemed as good as any to get out of town, given the prospects of a Doug Ford win.

And so there I was, in the dead of the night, making my way past Highway 115’s concrete overpasses, a few of them marked by grey paint used months earlier to cover up some anti-Kathleen Wynne graffiti. The local fathers (there are few sisters up here) took their sweet time getting rid of the vandalism, it seemed to me.

But then I could have just been imagining it. This is Ontario, right? Were supposed to be above petty politics. Ontarians are smarter than that. At least, thats what Wynne said when she kicked off what would turn out to be the most ill-fated campaign in Ontario history last month. Turns out she was desperately wrong.

Ontarians have elected a con man premier. I have no hesitation saying that about Doug Ford. His brother Rob, the former mayor of Toronto, was a pathological liar. Similarly, Doug has BSing down to an art form. He does it so often its second nature.

Its a harsh thing to say, I know. But now that hes got the power, watch out its going to be like Al Pacino in Scarface: Say hello to my little friend.

Queens Park is a different political environment than the one Ford got used to at city hall as a councillor. The place is teeming with history. Those who have entered the hallowed halls of the Pink Palace, as its affectionately known, cant escape the feeling that decisions made there affect the lives of millions of people, perhaps even the course of a country. That sentiment is practically inscribed in the portraits of former premiers hanging from the walls. With the weight of that responsibility comes a certain decorum when it comes to the way politics is conducted at the provincial level. Many of the young MPPs elected last Thursday will no doubt understand that.

But those expecting Doug Ford to grow into the role of premier can forget about it.

Take Fords presser Friday to announce his governments priorities when they formally take office at the end of the month.

Ford says his first order of business will be to scrap the cap-and-trade program with California and Quebec, which he said is part of his plan to cut gas prices by 10 cents a litre.

Ford was a little thin on the details of how he would disentangle Ontario from what is a complicated agreement. He also said the province would challenge, in court, the federal governments plan to impose a carbon tax on the provinces come January 1.

Besides pissing away millions on a legal challenge that he has no hope of winning, theres another problem with Fords plan the fact that Ontario is already exempt from the carbon tax precisely because it has a cap-and-trade agreement with Cali and Quebec. How he plans to make up the billions in annual revenue brought in by the program also remains a mystery.

Another hole in Fords plan is that companies have already invested in carbon-reduction technologies and purchased some $2 billion in credits under the cap and trade program. That money would presumably have to be paid back. So, yeah, this is becoming a very expensive proposition.

Ford changed the subject (he’s good at that too) when the dollars and cents of his plan were pointed out to him by reporters. Rest assured there’s another agenda at work. In this case, it’s the former HarperCons behind Ford’s campaign eager to turn carbon pricing into a federal election issue come 2019. That’s the thing about Cons. They talk a good came about respecting taxpayers and holding the bottom line, but they have no problem spending your money when it comes to scoring political points or getting re-elected.

On his promise to cut gas prices, Ford made a not-so-veiled threat to regulate the price of fuel should gas companies get any ideas about raising them come the weekend. Thats red meat for Fords supporters. Perhaps Ford does not understand the rules of supply and demand? Whatever. Ford was out the door before reporters could get him to answer their questions on that one. A few reporters took to Twitter to complain about that. They should get used to it.

Ford is not a details guy. No doubt a few folks in the Ontario public service will try to educate him on the ins and out of climate policy and the folly of some of his other expensive campaign promises. But dont expect Ford to accept their input.

When he served as councillor, Ford was not interested in all the reasons he couldnt do something, no matter how many bureaucrats tried to show him the error of his ways. It was Dougs way or the highway.

When former TTC chair Gary Webster suggested the Fords Scarborough subway plan was a waste of money, and that LRT was a far better option, he got the boot. In one fell swoop, transit planning in Toronto was set back a decade.

Fords government will face many challenges implementing parts of its election platform because either the math doesnt add up, or he hasnt considered all the ramifications. We can expect a similar exodus in the Ontario public service.

Wait till Ford settles into his other climate change-related promise to scrap the Green Energy Act. There, too, a number of contracts for green energy projects have been signed. Will he scrap those, despite the bad signal that will send investors? You can count on Doug doing whatever he thinks will win him votes with his base, no matter how nonsensical the idea or who it ends up costing as long as it isn’t him.