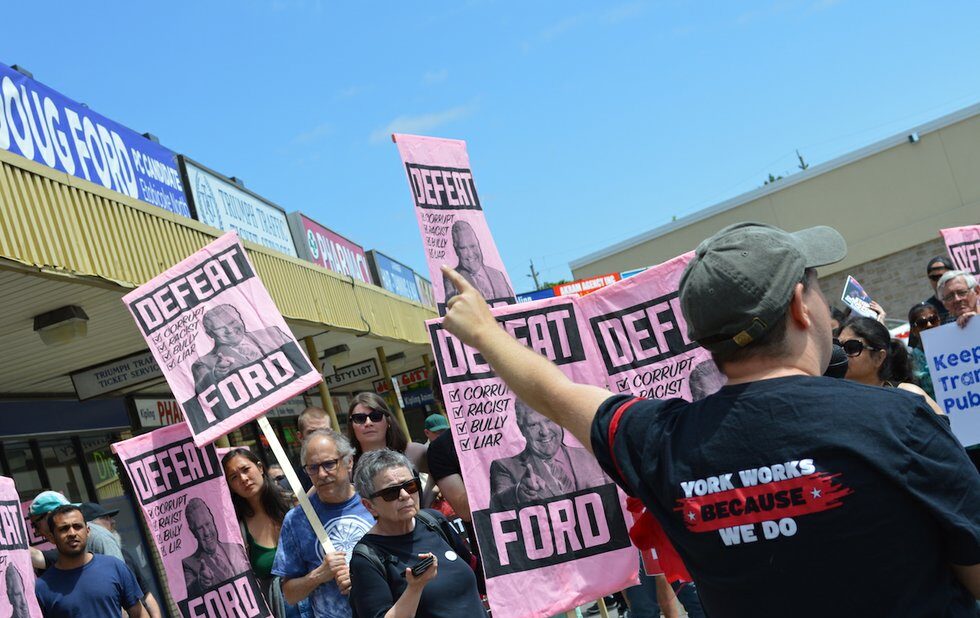 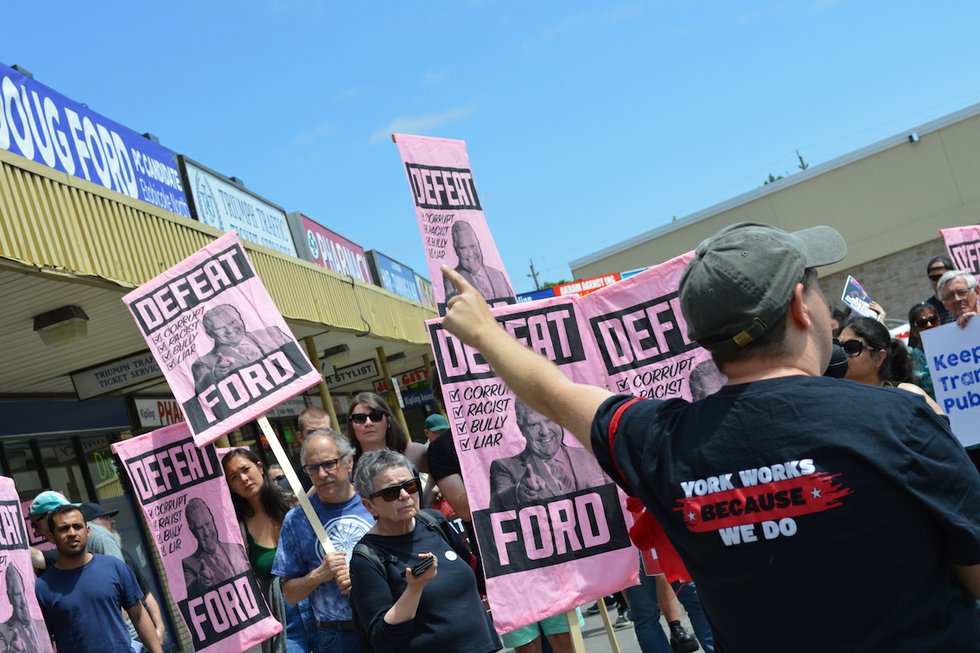 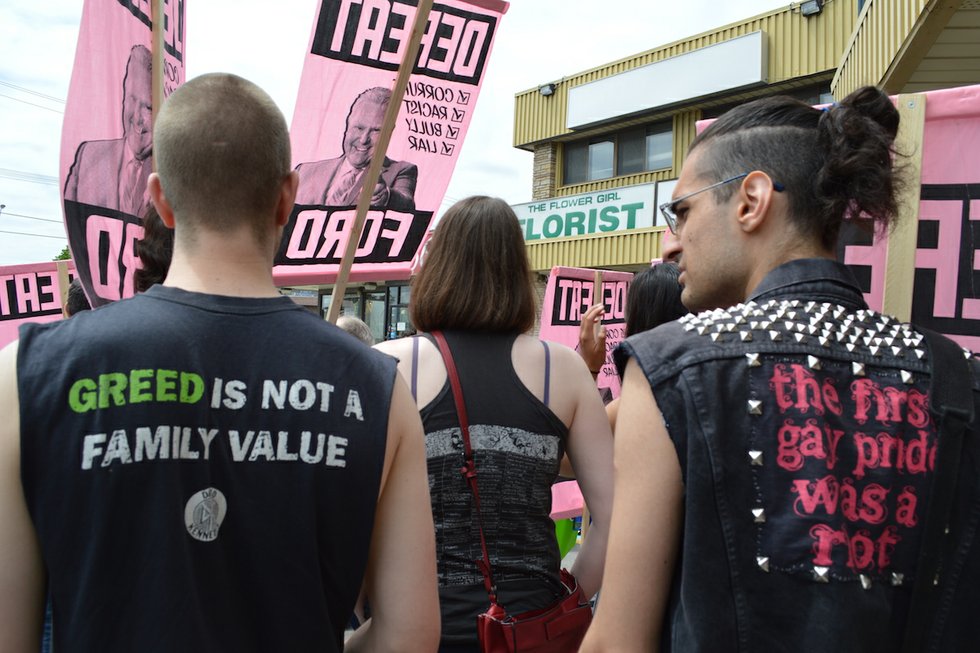 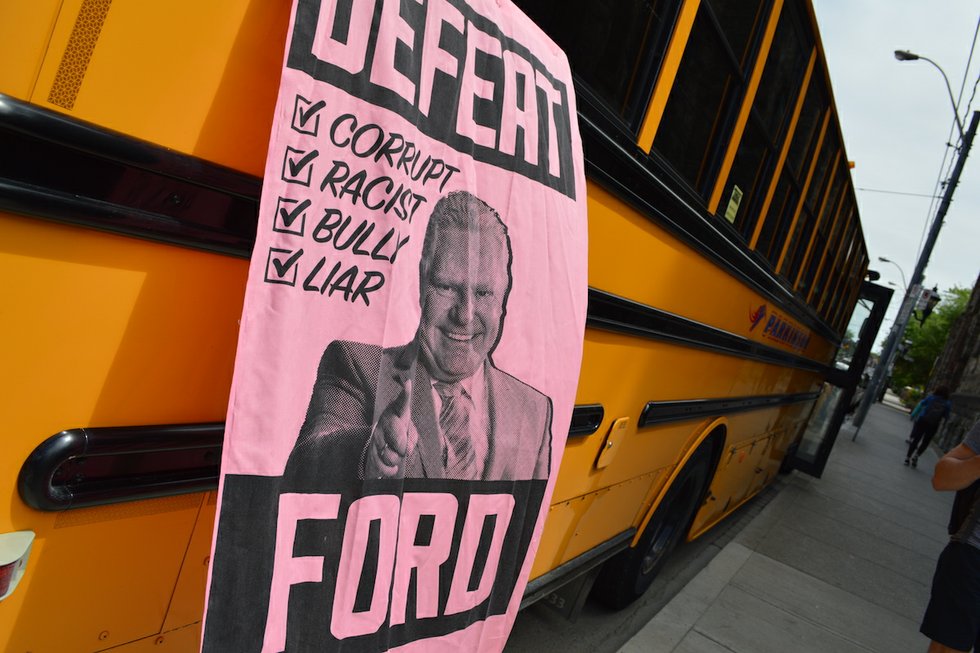 The Ontario Coalition Against Poverty bused about 60 activists from downtown to Doug Ford’s headquarters in Etobicoke on Saturday (June 2). Falafel, chicken wraps and water bottles are going ‘round on the bus as it barrels down the 401 headed deep into the heart of Ford Nation.

Carl Wlasenko, a 68-year-old former toolmaker, took part in a similar action in front of Ford’s campaign office in Hamilton last week. He says, he got into a run-in with a Ford staffer over some chalk art he’d scrawled on the sidewalk in front of Ford’s office. Wlasenko says he wants no part of the PC leader’s austerity agenda.

“I used to work in Scarberia,” says Wlasenko. (He talks like that.) But then the factories were taken over by malls. And, “if you don’t have manufacturing, you don’t need toolmakers,” Wlasenko says.

Asked who he’ll vote for, he says, “I still have to talk to some of the independent candidates. To me monetary reform is very important. Anybody who knows something about money reform, I’ll vote for.”

When we arrive, about 20 or 30 more demonstrators, representing various anti-poverty and precarious employment groups, are waiting in the Kipling Plaza parking lot. Carrying pink signs, the protestors march between parked cars and storefronts chanting (“Doug Ford as premier, hell no/We’ll shut down Ontario”) before halting in front of Ford’s campaign office next to the Dollar Store.

A driver pulling out of his parking spot yells out. “Get a job!”

OCAP organizer John Clarke picks up the megaphone. He says those who support Ford have it upside down about elites.

“We are the ones who are fighting the elites and we reject the duplicitous demagoguery of Dirty Doug.”

“They bully the most marginalized of people, the people who need the most help, people who have the least money who are only trying to survive,” says White. You can hear the frustration in her voice. “Fuck Ford, honestly. Doug Ford has drug users in his family. But he wants to shut down places that help drug users, that save lives?”

Wlasenko is standing in the shade of the plaza roofing keeping cool from the blistering early June afternoon sun. He’s keeping his chalk in his back-pack.

Chetan Mehta, representing Health Providers Against Poverty, tells the demonstrators how he remembers walking this strip mall as an eight-year-old “immigrant kid,” when his father was frequently unemployed and the family had to live with relatives.

Mehta says he watched his university tuition increase by 30 per cent during the Mike Harris Common Sense Revolution. A chorus of boos.

But for this generation of undergraduate students the situation is worse, Mehta says, noting that “college tuition has risen 300 percent above the rate of inflation.”

AJ Withers, whose union CUPE is in the thick of a labour dispute with York University, fears anti-union measures should Ford become premier.