NOW MagazineNewsOntario Election 2018: an open letter from Toronto to Ontarians thinking of voting for Doug Ford

Ontario Election 2018: an open letter from Toronto to Ontarians thinking of voting for Doug Ford

He's come to your town and felt your pain, but for those of us close enough to observe his and his brother's rise to power in Toronto – and the ensuing chaos – it looks like Doug Ford is on the brink of pulling one of the biggest cons in the history of Ontario politics 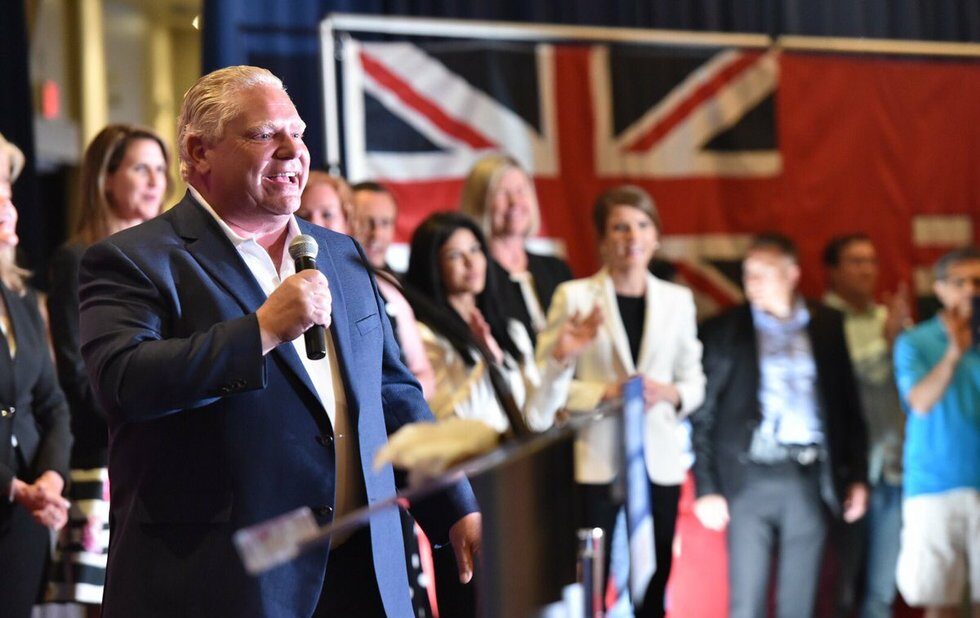 The most recent shocker  about PC leader Doug Ford cutting his late brother’s family off from their inheritance – and feathering his own nest with the money – must come as a surprise. After all, Doug seems like such a nice guy in person. Yes, he’s not without charm.

He’s come to your town and felt your pain. It’s hard not to believe all the great things he’s saying about how your life will change, literally overnight, if you vote for him on Thursday. It must all sound very good for those of you outside Toronto who’ve watched hydro rates go up or manufacturing jobs leave after the global financial crisis of 2007 dragged Canada into a recession in 2008.

But for those of us living in the Big Smoke and close enough to observe his and his brother’s rise to power in Toronto – and the ensuing chaos that caused – it looks like Ford is on the brink of pulling one of the biggest cons in the history of Ontario politics (if, that is, the polls are right).

His run for the PC leadership and now premier of Ontario has followed a familiar trajectory. It’s like we’ve been watching the return of Doug’s little brother, Rob, only scarier.

Back in 2010, Doug rode into office on the coattails of voter anger and the popularity of Rob. Their motto was “Respect for Taxpayers.” Today, a similar wave of voter antipathy has put Doug within a few percentage points of a possible PC majority. His motto is “For the People.” 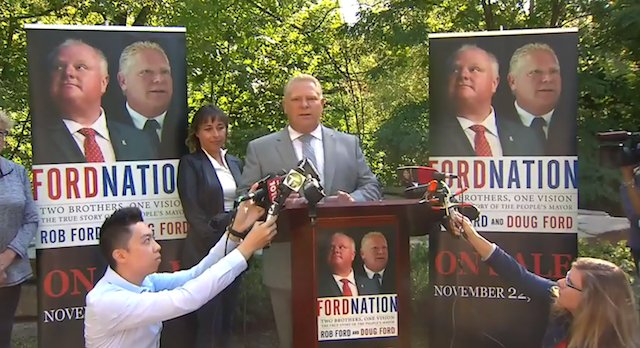 But behind that shit-eating grin the truth is that most of Doug Ford’s political career has been about promoting Doug Ford. You may not care about all that. But it’s worth considering just who you’re entrusting your vote to on Thursday. Doug did say this election is about trust, right? Let’s check the record then.

Doug likes to talk about his family’s years of service to the community. He claims to have donated his entire salary when he was Toronto councillor to charity, although it’s not at all clear that he did. He’s never divulged who has benefited from his (alleged) generosity.

What is clearer is that Ford used the power of his office when he was councillor to do favours for his friends, some of whom also happened to be clients of the Ford family label business. Just google the words “Doug Ford conflict of interest” and you’ll get the picture.

It may be hard to believe, but there’s a darker side to Doug. You may have caught a whiff of it from the supporters he keeps on the far right fringes, not to mention some of the questionable candidates he’s given his blessing to run for the PCs. Doug has been known to make the odd off-colour remark himself. But that’s just the half of it.

Back when every reporter and cop in town was beating the bushes searching for the video evidence of his brother Rob smoking crack, some shady characters started to show up in the Fords’ orbit. One of them, a high school friend of Rob’s who, some speculate, knew who shot the video, ended up being beaten with a steel pipe. Another got stabbed in jail.

It all seems like something out of a movie. But then again, Doug used to be a mid-level drug dealer in his youth, according to an expose in the Globe and Mail that Doug threatened to sue over but never did. If you didn’t know better, you’d think Doug was a biker or something. That may all be water under the bridge for most. But a career built on lies is something all voters should be concerned about.

Indeed, Doug likes to call himself a businessman. He does it every chance he gets. He’s fond of mentioning the fact he’s been president of the Ford family business ever since dear old dad passed away and handed over the reins. There are conflicting reports of just how successfully Doug has managed the family’s financial affairs. For all his supposed business prowess, there have been failed forays to expand operations south of the border.

Managing a business that employs a couple hundred people and managing the budget of a multi-billion-dollar provincial government are two different things. And when it comes to the financial affairs of government, Ford has shown a tenuous grasp. This was true when he was the so-called “brains behind the operation” when his brother was mayor of Toronto. It’s been true throughout this campaign, most of which he’s spent running from questions about that fully costed campaign platform he’s promised voters.

The PC leader released a document with numbers on it last Thursday, May 31, and tried to pass it off as the fully costed platform. Only, there’s a $6 billion (at least) hole in the bottom line. That $6 billion is the amount the PCs are promising in savings from “efficiencies” in government spending, which they have yet to identify but which the PC leader says he’s going to hire an auditor to find.

Even if those kinds of savings could be found – Don Drummond, the Queen’s University economist hired by the Liberals to review government spending a few years ago, doesn’t believe they exist – $6 billion wouldn’t be enough to cover the cost of PC promises, which currently tally about $10 billion. The verdict is in: the PCs will end up putting Ontario in more debt than either the Liberal or NDP platforms. It’s voodoo economics, folks, the same he tried to pull on taxpayers in Toronto when he and his brother were running the show.

Back then, the Fords promised to save taxpayers a cool billion. But the Fords knew zero about how to craft a budget. And the only people on council who did – the lefties left over from the David Miller regime – had been ostracized by the Fords. So the Fords hired consultants to find “efficiencies.”

Only problem is the consultants couldn’t find all the gravy supposedly dripping from the city’s books. And so we ended up with penny ante stuff, like getting rid of the guy who waters plants at City Hall, as well as big cuts to library and bus service and daycare spaces, and increases in rec fees. (The list goes on.)

The PCs did have a fully costed platform. It was developed with the help of the rank and file under Ford’s predecessor, Patrick Brown. It made all kinds of promises, including a carbon tax to pay for all of it. But Doug threw that idea in the garbage when he became leader. He’s been making promises he knows he can’t keep ever since.

That’s another thing people outside Toronto may not know about Doug. He’ll say anything to get elected. He ends every stump speech on the same line about a new day dawning come June 7. For those who have faith, it sounds like the second coming. Those of us who’ve seen this script before know better.