Where once the PCs were the party of elderly and affluent voters, they now do well with voters who are younger, have less education and lower incomes 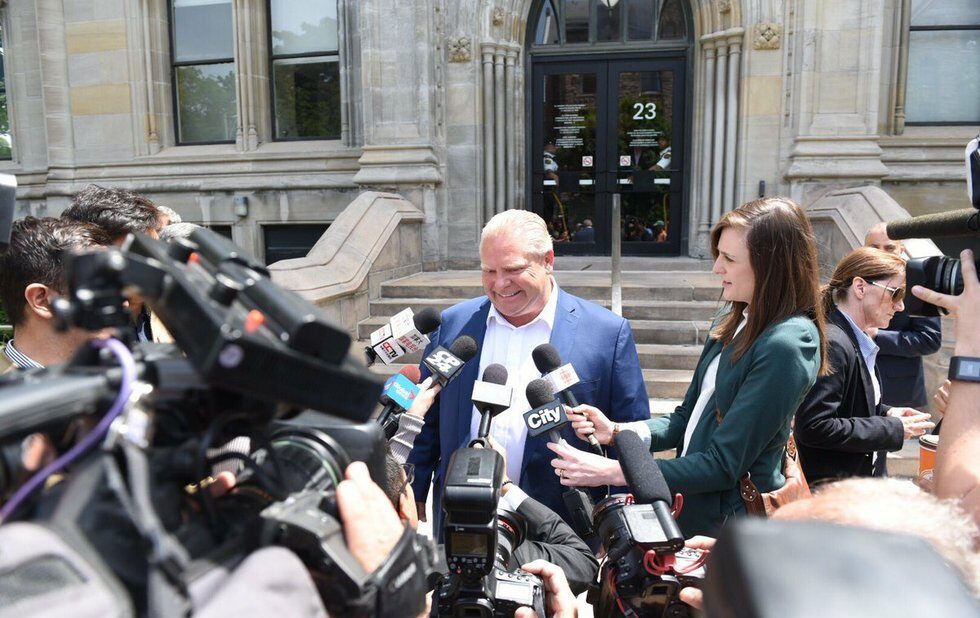 Elections are defined by “swing” voters being wooed by the parties: Soccer moms, hockey dads or even Joe the Plumber.

The PC majority in the Ontario provincial election was about capturing the “ordered voter.”

With economic upheavals, there is a segment of the population looking for stability and order. Not sharing in economic prosperity, they look to government to slow social change, such as those related to immigration and multiculturalism. Lacking faith in transformative change, they look to politics as a way to deliver small material benefits like a tax cut or cheaper hydro.

Holding onto those voters is a fundamental challenge for Ford and his government.

It seems unfair to emphasize the role of swing voters, but they are crucial in our first-past-the-post electoral system. Ford’s crushing majority came with 40 per cent of the vote. This is only 4.5 per cent higher than what was considered a disastrous performance in 2014. Ontario voters did not radically change their political views, but movement at the margins radically changed their politicians.

In its polling, EKOS has argued that the Conservative coalition has changed. Where once the PCs were the party of elderly and affluent voters, they now do well with voters who are younger, have less education and lower incomes.

EKOS credits this to the rise of a group of voters with an “ordered” outlook. With little hope for a better future, they yearn for leaders who will at least deliver small concrete benefits and enforce traditional norms of merit and deservedness.

The PCs test-drove appeals to the ordered voter when Doug Ford’s late brother was mayor of Toronto. Even after all of Rob Ford’s scandals, public opinion surveys revealed how economic hardship was related to his support. People for whom having another $50 a month would make a big difference were more likely to support Ford, as were the more religious.

Most concur that Kathleen Wynne has often been unfairly vilified, no doubt in part because she’s a woman and a lesbian. But her commitment to sustained austerity in public services also resulted in people feeling they were getting less service bang for their tax buck.

The Ford Conservatives did not have the ordered voter to themselves. They had to compete with the leftist populism of the NDP, a party firmly rooted in many areas where the “ordered” outlook is pronounced, such as Windsor, the Niagara Peninsula and the North.

In the 2014 election, Horwath was heavily criticized within her own party for running on a platform that cared more about drivers than dental care.

To the ordered voter, she offered to use the state to make life more affordable in very concrete ways, such as reduced auto insurance and hydro rates. While all but wiped out in Toronto, Horwath maintained her seat and vote share despite Wynne’s persuasive calls to vote Liberal to block Tim Hudak’s PCs.

Horwath came close this time, with a fleeting lead in the polls at mid-campaign, before dipping back to 34 per cent, the second-best result in the history of the Ontario NDP. The NDP’s appeal to the “ordered voter” worked in its areas of existing strength, and limited PC gains in Toronto.

In the suburbs and the 905 region surrounding Toronto, where the party has been week for a quarter century, it stalled.

The barrage of negative advertising from the Conservatives about NDP candidates who refused to wear poppies, or accusations that declaring Ontario a “sanctuary province” would allow foreigners to come illegally and abuse health-care resources, killed the NDP’s momentum.

These were cultural appeals to “ordered voters.”

The NDP could have framed a response in its childcare, pharmacare and dental care proposals: Those who work hard should be able to look after their teeth and deserve quality education for their young children.

But the Conservatives succeeded in defining that as “free stuff” that the NDP would tax you to pay for.

Ontario will continue to be a tough place to govern.

Without the oil that sparked prosperity in Alberta, Saskatchewan and Newfoundland, and without being a net recipient of equalization, Ontarians find themselves paying taxes above the Canadian average, and yet per capita, provincial spending is among the lowest in Canada even as the provincial debt grows.

Economic growth has been slow, with weak private sector investment and poor productivity growth. While unemployment is at its lowest in 15 years (5.5 per cent), that masks the fact that the percentage of Ontarians aged 15-64 in the labour market has declined from 79 per cent in 2003 to 72.3 per cent in 2017. To steal a malapropism from the Trailer Park Boys, it is a situation of “worst-case Ontario.”

The Canadian Centre for Policy Alternatives estimates an annual shortfall of more than $13 billion in the PC platform, and the need to cut between 45,000 and 65,000 direct government jobs to close it. While tax cuts might stimulate the economy, they will either involve running up a provincial debt that they previously found dangerously unmanageable, or require significant public sector cutbacks that will slow the economy.

The bigger difficulty for Ford will be maintaining his base. Tax cuts that provide $7 to those earning under $49,000 while providing half the benefits to the top 10 per cent may be a red flag to ordered voters.

Gas prices swing up and down, and the 10-cent gas tax reduction will be quickly forgotten. Cuts to hospitals, schools and universities, by contrast, are visible and have immediate effects on people’s lives.

Wynne’s action on the minimum wage and child care provided one ray of hope that hardworking Ontarians might be able to hold it together. Ford’s ray of hope to ordered voters was that he could leave something more immediate and tangible in people’s pockets through tax cuts.

Riling up public sector workers and the Toronto professional class will buy some political good will with these voters. But Ford can only hope to hold onto them if a few bucks in tax savings doesn’t result in more user fees, higher tuition and clogged emergency rooms.

Peter Graefe is associate professor in the department of political science at McMaster University and a member of the NDP. This article was originally published at theconversation.com.