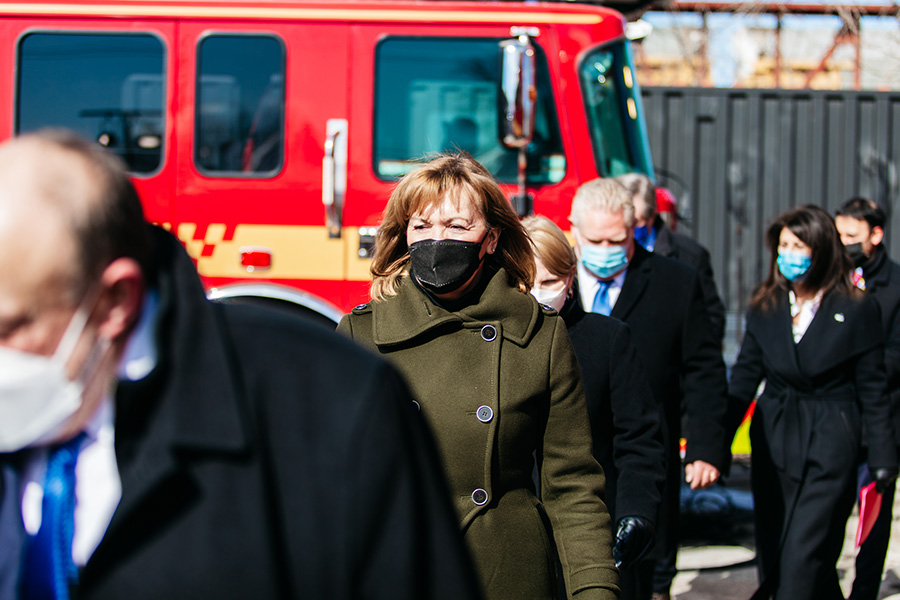 Doug Ford’s ship may not be sinking, but it’s certainly springing a few sizable leaks.

A little more than three months out from a provincial election, health minister and deputy premier Christine Elliott announced in a statement Friday that she will not be seeking re-election.

Elliott says she would remain as health minister until the election. She says the decision not to run was made “after considerable reflection and discussion with my family.”

Elliott had up until recently told certain members of the Queen’s Park press gallery that she planned to stand for re-election, but now becomes the third high-profile member of cabinet to announce her departure since the beginning of the year.

In January, Ford’s former finance minister and minister of long-term care, Rod Phillips, announced he would not be seeking re-election. That was a week after former environment minister Jeff Yurek stated that he would not be running either.

On February 18, three other PC MPPs – Daryl Kramp, Bill Walker and Jane McKenna – also announced they would not be flying the PC flag in the upcoming election. Kramp, who has been an MPP since 2018, cited health and family reasons. Walker, a former Minister of Government and Consumer Services has decided to retire. McKenna, the Associate Minister of Women and Children’s Issues, is running for regional chair in Halton.

Five other sitting PC MPPs, including Scarborough Centre’s Christina Mitas, have also announced their intention not to run.

Ford’s PCs continue to lead in public opinion polls but the 76 seats won by the party in 2018 have now been whittled down to 65 incumbents running this time around, which puts the government dangerously close to the 63 seats required to hold on to a majority in the 124-seat Legislature.

The timing of Elliott’s announcement so close to the June 2 election comes as a shocker for Ford. As a moderating voice and influence in the cabinet, Elliott was also one of the few remaining high-profile members of government. The talent pool has become noticeably more shallow with her absence from Ford’s roster of candidates.

While her departure may not be completely unexpected – at 68, and after three failed attempts at the party leadership, it was arguably time to move on, Elliott’s statement hints that “the last 24 months in particular” have been a challenge.

But it’s also no secret Elliott sided with bureaucrats in the health ministry over the government’s COVID-19 response, which at times put her in conflict with her caucus colleagues.

Publicly, Elliott toed the line but also found herself bearing the brunt of government missteps. On the one hand, she had to contend with a premier who didn’t completely believe the science on COVID-19. On the other, there were medical officers of health – first David Williams and now Kieran Moore – who seemed too willing, in the view of some, to bend to cabinet’s political whims when it came to the province’s pandemic response.

As a result, Elliott became the target of critics on both sides of the issue – those who believe the province’s response wasn’t coordinated enough and those among her own constituents who thought restrictions were too harsh. The backlash would result in protests at the front door of her Toronto home.

It has been a challenging time both politically and personally for Elliott who, before she decided to run for party leader against Ford, was the province’s first Patient Ombudsman. As her statement points out, she decided to get into politics in 2006 “because of my strong desire to improve the lives of individuals with special needs.”

To others though, Elliott seemed all too willing to go along with a government that was shortchanging Ontarians as the pandemic claimed lives. It was revealed this week by the Financial Accountability Office, for example, that the province has already underspent its budget by some $5.5 billion so far this year, including some $670 million in public health, $554 million in education and $1.1 billion in social support programs.

Ontario is now facing a backlog of some 58,000 surgeries because hospital resources had to be redirected during the pandemic. The Ontario Medical Association says that the backlog will take more than two years to clear.

The premier issued his own statement Friday commending Elliott’s efforts in reinvesting “hundreds of millions of dollars… previously wasted on government bureaucracy directly into better patient care.” Ford also mentioned their long-standing political and personal ties, which go back to when Doug Ford Sr. shared the benches with Elliott’s late husband, Jim Flaherty, in the Mike Harris government, which brings its own baggage. For Elliott, the face of the pandemic, there’s no good time, it seems, to call it quits.