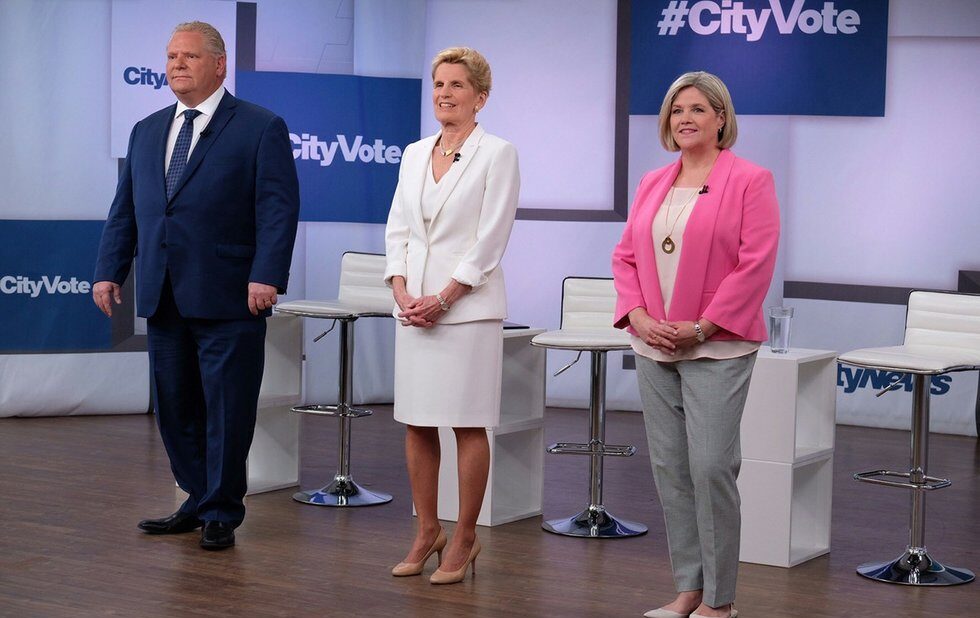 1. Doug Ford proves he’s not ready for prime time. The prohibitive frontrunner was a mess. He started off stiff and scripted – when he could remember his script – and seemed completely out of his league early on, causing even the applause among supporters who stacked the CityNews studio to wane noticeably in spots. Turns out a few of those outside waving Ford signs were paid actors. The good news is that Doug was smart enough to know when to shut up, checking out of the debate for long stretches, while NDP leader Andrea Horwath and Premier Kathleen Wynne duked it out.

The PC leader found his footing when the going got a little more rough and tumble – he loves a fight. But he was mostly flying by the seat of his pants, offering placebos, falling back on well-worn canned quotes – like that old standby “Tax, tax, tax, spend, spend, spend” – or BSing outright when policy points escaped him. Although, you wouldn’t necessarily know that from some of the self-serving political analysis afterward.

On the police practice of carding, for example, Doug declared that a Ford administration would have “zero tolerance” for cops who abuse their power, a position diametrically opposed to the one he took when he declared at a recent Somali community event on gun violence that he would bring back TAVIS, the Toronto police unit disbanded in 2017 over allegations of rampant racial profiling.

Similarly, on safe injection sites, Ford talked up more money for rehab, after declaring recently that he is dead set against safe injection sites. There were a couple of other whoppers thrown in for good measure: that he’s visited every town in Ontario since being elected PC leader that he’s met more people in his short time as PC leader than both Wynne and Horwath combined.

He also mentioned dropping $5 billion to expand regional transit, a platform plank he seemingly copped from his predecessor, Patrick Brown. It was supposed to be his big policy announcement for the night. But again, there were zero details. Ditto for a promise to “finish the Scarborough subway loop,” which can only mean more money down the drain.

Oh, and then there was this: “You know me, I’m for the little guy,” which was enough to make you want to throw up your cookies, especially coming on the heels of that leaked video showing Ford promising to sell of a “big chunk” of the Greenbelt to big-money developers. That’s Doug in a nutshell. 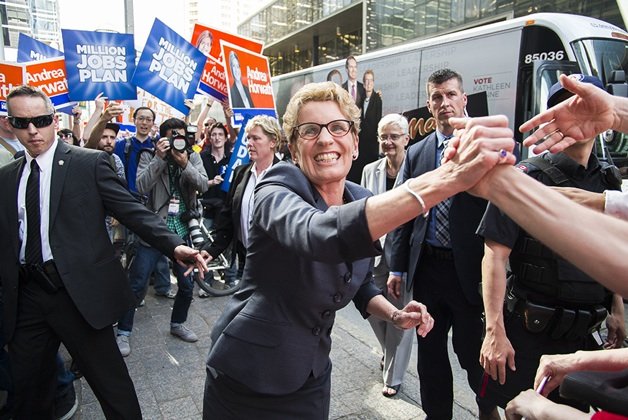 2. Wynne fights on. The Premier was polished  – maybe a little too polished given criticism that she comes across as a know-it-all – and proved a tough nut, going toe-to-toe with Ford several times. She knows her stuff, challenging Ford on the vaguer parts of his platform, of which there are many. She also wore white, which for those who followed Melania Trump’s recent state visit to France – and who have noted the Liberals’ comparisons of Ford and Trump – felt like subliminal messaging. As in, “I’m not the bad guy here.’”

Wynne didn’t shy away from pumping the Liberal record, repeating the fact that the province is experiencing its lowest unemployment rate and highest growth numbers in decades. All true, except that if you ask the average voter whether they’re better off today than they were four years ago, you’re bound to get a different answer.

The Liberals want to frame this election as a choice between the caring Liberals and cuts-focused PCs, and on that front Wynne did a good job of it. Whether voters still have faith to hear her out is the question.  She’s got a perception problem, but kept her cool as best as she could under attacks from both sides on her government’s record of “scandal, mismanagement and waste,” as Ford termed it. Notice he didn’t use the word corruption, which has been a standby on the campaign trail.

She tried not to get her back up, but her body language betrayed her at times on the occasions when she turned her back on Horwath to debate Ford. It worked more to Wynne’s advantage when she stepped back to let Horwath have at it with Ford – if only to reinforce the message that she wasn’t the only one in the room who thinks Doug’s got some loopy ideas. 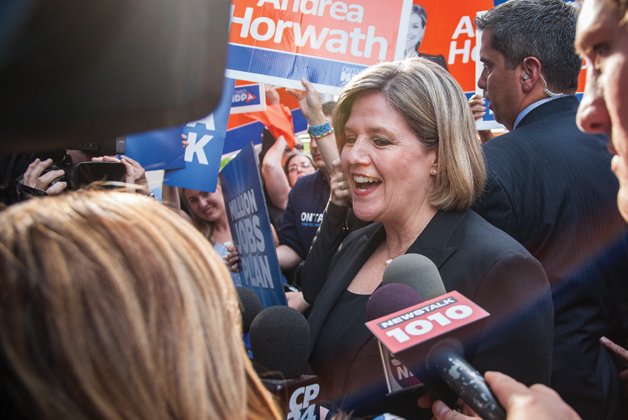 3. A sharper Horwath. The NDP leader wasn’t as quick on her feet as she could be at times, turning an early question on carding into blaming the Libs for child welfare and incarceration rates – whoa. Not surprisingly, Wynne ignored that one.

Horwath eventually found her stride going after Ford, in particular on where he planned to find those “efficiencies” he keeps talking about without making cuts to health care and education. It was a strategic move, with an Abacus poll released hours before the debate showing PC support bleeding to the NDP. She also got a couple of zingers in when the bickering between Ford and Wynne was sucking up most of the oxygen in the room. “We don’t have to go from bad to worse. We can choose better.” Horwath set an optimistic tone.

Her most effective moments came on transit and the city’s opioid crisis. The NDP is promising to restore provincial funding to the TTC’s operating budget and establish an independent ministry for mental health and addictions. For voters looking for change, Horwath made a more convincing case than Ford.

4. The big winner. Each of the candidates held their own to differing degrees, but Ford less so than the rest. It should have been obvious to anyone watching, even those who might be predisposed to voting for him, that he’ll say anything to get elected.

Wynne proved a formidable debater, and on policy, she was the candidate with the most breadth. No surprise given she’s been premier for the last four years.

Horwath, who had the most to gain, has been criticized in the past for coming across as a little flat when it matters most. She still needs to up her game, but the good news for Dippers is that there’s more room for her than any other candidate to grow her vote.

5. The big losers. The Green party, which was not invited to the debate. Also Doug Ford (see above) and CityNews. The Rogers-owned media outlet hosting last night’s debate set up the evening with short stories on a number of local issues that made Toronto feel more like crime-ridden Chicago. The framing looked calculated to favour Ford. And then there were the Twitter polls surveying viewers throughout the broadcast which came to a number of questionable conclusions, including that Ford was head and shoulders above the rest on policing issues, which should tell you all you need to know about online polls – not to mention the power of the media to set the stage for the wrong political narrative this election.