The premier is also issuing a stay-at-home order that will take effect on Thursday, January 14 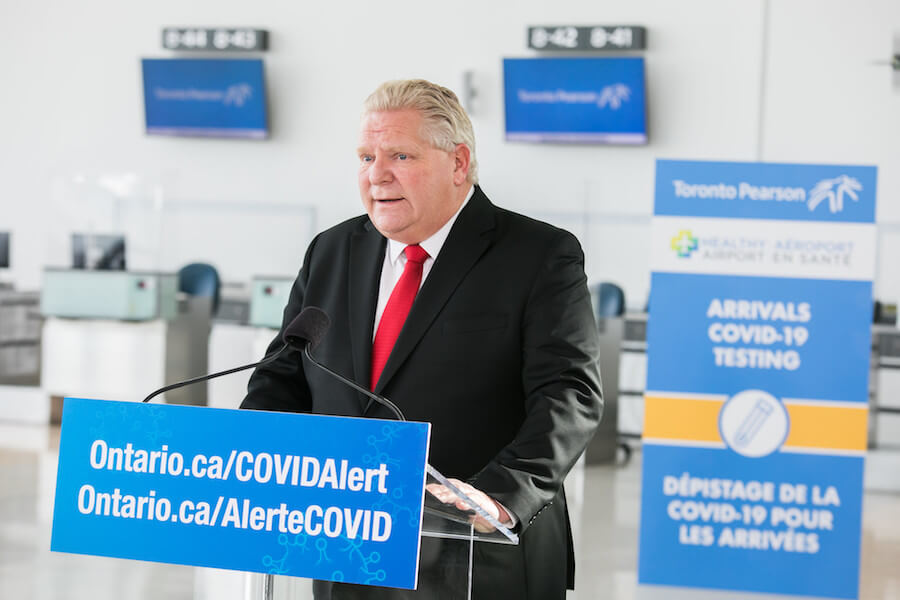 During a press briefing at Queen’s Park, the premier said he is also issuing a stay-at-home order that will take effect on Thursday, January 14 at 12:01 and last 28 days.

Ford said he is undertaking the move in response to record daily case increases and surging intensive care admissions that are expected to overwhelm the health-care system.

“Under this order, everyone must stay home and only go out for essential trips to pick up groceries or go to medical appointments,” Ford said. “The system is on the brink of collapse. It’s on the brink of being overwhelmed. We’re at levels we’ve never seen before.”

Schools in Windsor-Essex, Peel, Toronto, York and Hamilton will remain closed for in-person learning until February 10.

By January 20, the provincial Chief Medical Officer Health will make recommendations for schools in the remaining regions.

“This order and other new and existing public health restrictions are aimed at limiting people’s mobility and reducing the number of daily contacts with those outside an immediate household,” the government said in a statement. “In addition to limiting outings to essential trips, all businesses must ensure that any employee who can work from home, does work from home.”

The government is also suspending enforcement of residential evictions, reducing gathering sizes from 10 to five people and limiting hours for retailers, Ford said.

Non-essential business will remain open but must close by 8 pm daily with the exception of grocery stores, pharmacies, gas stations, convenience stores and restaurants that offer takeout or delivery.

Ontario’s decision to reimpose a state of emergency comes after provincial public health officials said daily deaths are expected to double from 50 to 100 between now and mid-February.

Officials also said current lockdown measures have not led to reduced mobility among the population.

“We must change our mobility patterns. Too many people are having too many contacts. Increased contacts results from increased mobility,” Health Minister Christine Elliott said.

The state of emergency allows Ontario to enact new measures, such as emergency orders closing businesses, outside the framework of the current province-wide lockdown, which took effect on December 26.

“Extraordinary action is needed to protect the health and safety of Ontarians as we deal with this growing crisis,” she said.

The new restrictions include:

These measures will come into effect between January 12 and 14.

Ontario previously declared a state of emergency on March 17, 2020 to shutdown non-essential businesses and workplaces during the first wave. The emergency lasted until the end of July.

While the province of Quebec has implemented a curfew to curb virus spread, Ford said he is opposed to curfews.

“I’ve never been in favour of a curfew,” he said. “I believe in the people of Ontario. As soon as you tell the people of Ontario you’ve lost trust and we’re gonna have police chasing you down the street when you’re driving, that’s it. It’s game over. You might as well throw in the white flag.”

The continued operation of big box stores (at reduced capacity) has been a sticking point for smaller retailers. Walmart and Costco are considered essential since they sell groceries, but the stores are still able to sell non-essential goods.

Ford said box stores will be the subject of an enforcement blitz in the “coming days.”

“I’m going to come down on [big box stores] like an 800-pound gorilla,” he said. “If they don’t have 50 per cent only in the stores, there’s going to be consequences.”