The province is advising people in Toronto, Ottawa and Peel to leave their homes for essential reasons only 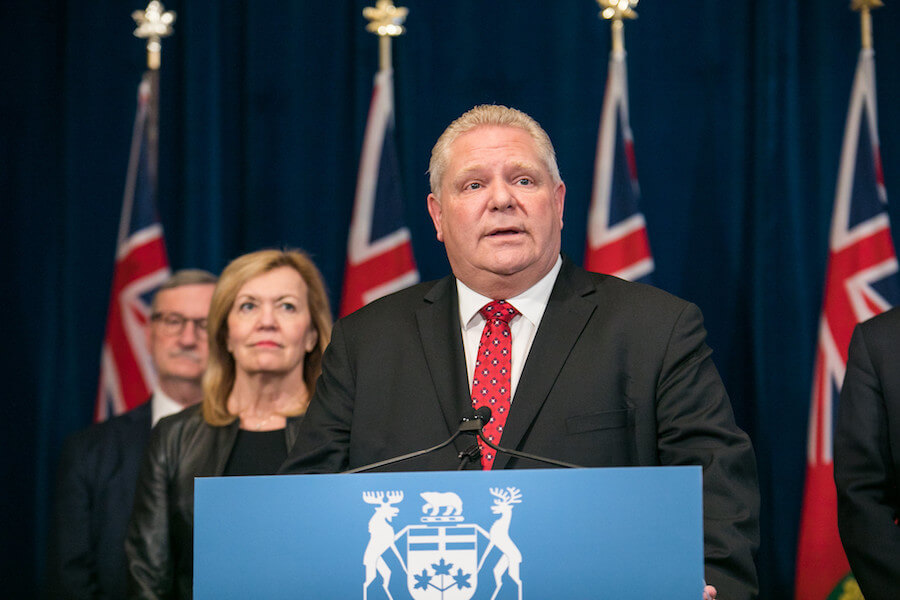 Ontario will close indoor dining, gyms, fitness centres and cinemas for the next 28 days in Toronto, Ottawa and Peel as COVID-19 cases surge in those regions.

The move is part of new public health restrictions that will see the three regions move back into a “modified Stage 2 level,” Ontario’s Medical Officer of Health Dr. David Williams said on Friday.

The measures will take effect at 12:01 am on Saturday.

He is also recommending to the government that casinos, bingo halls, conference centres and gaming centres close.

Malls must switch from food-court service to takeout only. Team or competition sports will not be allowed to take place, though individual training will be permitted.

The province is asking museums, galleries, zoos and science centres to limit activity that could lead to spread, such as interactive exhibits.

“Media and events spaces” can still have 10 people maximum, but they might be closed later in the week. Performing arts and racing venues will also close.

Ontario reported a single-day increase in new infections of 939 on Friday, a new record.

“Cases are growing and growing faster than we initially stated last week,” said Steini Brown, dean of the University of Toronto’s School of Public Health.

He explained the increase in new positive cases comes as the province is hitting high testing numbers. “We are very clearly in a second wave,” he said.

Health officials say the number of contacts for positive cases is now as high as 100 people in some cases.

Premier Doug Ford said the doctors briefed him on the “brand new” data last night and “the situation today is extremely serious.”

“All trends are going in the wrong direction,” he said during a Queen’s Park press briefing. “If left unchecked, we risk worst-case scenarios first seen in Italy and New York City.”

To help small businesses, the federal government is extending the commercial rent subsidy program and changing it to allow tenants to apply for aid directly rather than funnelling the relief through landlords.

Ford said the province will also waive municipal and property tax bills, and hydro and natural gas bills for small businesses. Those details will be announced in the days ahead, he said.

Speaking at city hall on Friday, Toronto’s Medical Officer of Health Eileen de Villa said there were 350 new infections in the city during the past 24-hours.

Toronto has now had 21,919 known COVID-19 cases since the pandemic began.

In the past eight days, Toronto reported almost 2,000 new cases of COVID-19, she noted.

“This figure represents almost 10 per cent of all of our cases since the beginning of the pandemic in just eight days,” she said.

There are 95 people in hospital with COVID-19 in Toronto, including 26 in intensive care and 12 who are intubated.

She called today “possibly the most important day in this fall’s resurgence of the COVID virus,” but added Ontario’s new restrictions are reason for cautious optimism.

“We are now positioned to challenge the spread of COVID-19, but we cannot forget it is always ready to erupt if we let our guard down in our daily lives,” she said. “Through these temporary restrictions we can blunt the toll that resurgence will take.”

Brown said the data provincial officials are seeing shows very clear accelerating trends in all indicators that are “more worrisome, challenging and dangerous picture” than what they presented in modelling projections a week ago.

“We are seeing a dramatic growth in the percentage of tests that are positive,” he said, noting that the positive rate for tests in Ontario is two per cent.

The trends in the pandemic over the past week are paralleling the worst-case scenario presented in the modelling, he added.

While the bulk of new cases are in people under the age of 40, Brown said positivity rates are increasing in older people.

For people over age 60, the positivity rate is 1.4 per cent – a threefold increase since the last week of August.

COVID-19 hospitalizations have grown 250 per cent over the past three weeks.

Provincial officials are now predicting that intensive care unit occupancy will hit 150-bed threshold in the next 30 days. That means the ability of hospitals to provide other surgeries will be jeopardized.

However, Brown noted the pandemic is playing out differently throughout the province.

Three or four public health units are experiencing a steep trajectory in new cases, but indicators remain flat in a third to half of provincial jurisdictions.

Where COVID-19 outbreaks are occurring in Toronto

As of October 5, Brown said the vast majority of outbreaks in Toronto are “clearly occurring” in community or workplace settings.

Specifically, settings that are indoors where it is difficult to consistently wear a mask and to physically distance, such as private gatherings among friends.

“There’s a significant number [of new cases] as well that occur in dining, bars and entertainment,” Brown said.

A week ago, de Villa recommended closing indoor gym classes and indoor dining, but Ford said he needed to see more data before undertaking the move.

Brown said the lowest source of new outbreaks is schools, which will remain open.