While the education minister blinded us with arithmetic, it was Ontario's chief medical officer of health who made a real mess of the proceedings 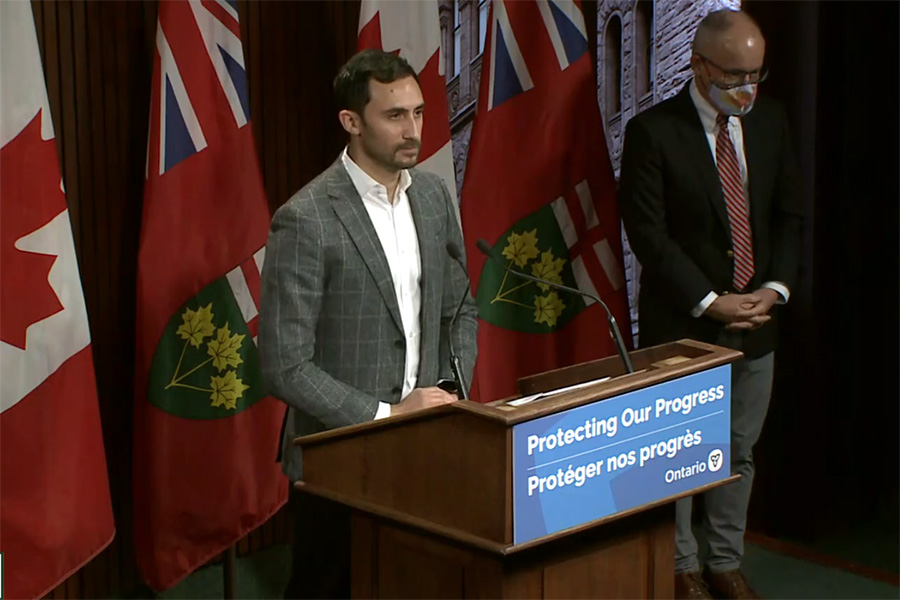 Just when it looked like the Ford government’s response to Omicron couldn’t get any worse, it got worse.

Education minister Stephen Lecce and Ontario chief medical officer of health Kieran Moore held court at Queen’s Park on Wednesday afternoon to confirm news that had been leaked on Monday – that kids would be returning to school for in-person learning on January 17.

The press conference called to announce new “layers of protection” for the return to in-person learning, however, turned out to be a gong show, with both Lecce and Moore having to later clarify a number of bombshells inadvertently (or not) dropped in the middle of the proceedings. It’s a wonder no one from the premier’s office showed up with a giant hook to yank Lecce and Moore from the stage of the Queen’s Park media studio.

When all was said and done, the details offered on how the province plans to protect students, teachers and staff only served to provide more unsettling evidence that the government is flying by the seat of its pants on Omicron.

Lecce tried to sound empathetic, which is a departure from previous pressers where he has delivered the province’s plans with an emotional distance, but given the Ford government’s treatment of school boards, it didn’t come across as genuine.

He rolled out a long list of numbers in support of the government’s decision to send kids back to school, including the 3,000 HEPA filters and personal protective equipment the province has delivered (or will be delivering, it isn’t entirely clear where that’s at in the supply chain) to education workers and staff to ensure the return is “as safe as possible.”

The minister also announced plans for the distribution of more rapid antigen tests (two per student) and a plan to set up in-school clinics to encourage more kids between the ages of 5 and 11 to get vaccinated. Those should be set up by sometime next week. Right now, fewer than 50 per cent in the age group have received at least one dose of the vaccine.

There was no counter at the bottom of the screen to tally the number of times Lecce was bending or misrepresenting the truth. But the truth is none of the numbers matter. It’s all backfill at this point.

We’ve been through five waves of the pandemic, and each time we’ve ended up in this scenario – a government unwilling to invest the dollars necessary to avert chaos and making it up as they go. Only, this time it’s a highly transmissible variant that’s the enemy.

But while Lecce spent most of the presser blinding viewers with arithmetic – not to mention, what a great job the Ford government has been doing managing the virus – it was his sidekick Moore who ended up stealing the show, only not in a good way.

Ontario’s top doctor, who’s turning out not to be the great communicator (or adult in the government backrooms) that pundits had predicted (and hoped) was asked why the province has not made vaccines mandatory for school attendance. Eileen de Villa, Toronto’s medical officer of health, called the idea of requiring COVID vaccines for children “straightforward” at her press conference Wednesday, noting children are already required to be vaccinated for a range of diseases.

But Moore offered a reply that landed with a thud.

“It’s a new vaccine,” he said. “We want more experience with it before we mandate it.”

Was Moore casting doubt on the safety and efficacy of vaccines? Indeed, it didn’t take long for Moore’s comments to light the hair of the anti-vax crowd on social media on fire.

Moore’s office would release a statement later to clarify that he supported vaccination and wanted to be “clear” that “the paediatric Pfizer vaccine for children 5 to 11 is safe, effective and provides strong protection.”

On the question of vaccine uptake, however, Moore also said on Wednesday that the province wants “to alleviate the concerns parents may have.” Was he talking about anti-vax parents protesting outside Lecce’s house for the second night running?

Moore, who it was thought would speak truth (and science) to power when he was brought in to replace David Williams, has seemingly buckled under the political pressure to provide cover for the government’s COVID failures.

The cockamamie business didn’t end there with Moore.

That hasn’t necessarily been the case with previous waves. But even if schools are not, as Moore suggests, a “large multiplier,” the fact that they reflect community transmission means infection rates in schools will also be high.

Enhanced screening and testing are supposed to blunt the risk of spread. On that front, Moore said that the province was “empowering” parents by providing kids with rapid tests. Except, the province is also doing away with the requirement to report COVID-19 case counts and dismiss classes when there are outbreaks. Parents will only be notified of absenteeism rates and only then when they hit 30 per cent.

The education minister’s office would also be forced to backtrack on that later, telling CityNews there will be reporting on case counts after all.

None of this inspires confidence, but it does demonstrate the overwhelming view in the corridors of power at Queen’s Park that, despite the havoc Omicron is wreaking on the health-care system, children are not likely to face dire consequences if they contract the variant.

All of which leaves many parents in the unenviable position of having to decide whether to send their children back to school on Monday.