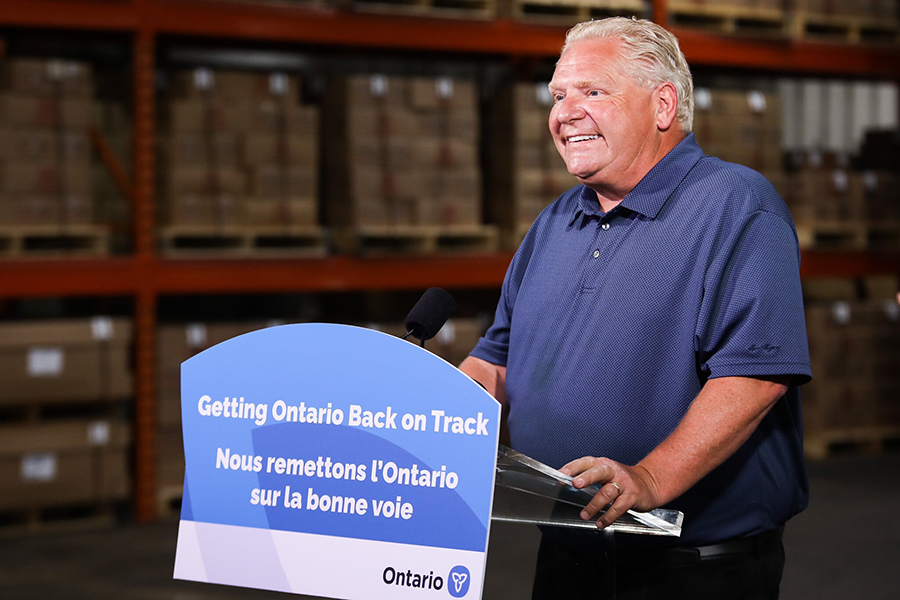 Doug Ford has been on a summertime tour of Ontario.

Bill 195 was rushed through the Legislature in the middle of the summer under cover of a global pandemic while Ford was on a tour of southwestern Ontario.

The usually Ford-friendly National Post’s editorial called the passage of emergency powers “an unjustified violation of our Charter protected rights.”

The Canadian Civil Liberties Association labelled it as “a grab for more permanent emergency powers while cutting democratic controls.”

One Conservative MPP voted against it. To her credit, Belinda Karahalios stated that “at its core, Bill 195 takes away the Legislature’s ability to vote on the use of extraordinary emergency powers.”

Ford kicked her out of the caucus for standing up against his expansion of power.

Prior to its passage, the Legislature had to approve the extension of emergency measures under Ontario’s Emergency Measures Act every 28 days. Now, Ford has extended the power to renew each year in perpetuity, including after the pandemic is over.

These emergency measures include the power to collect personal health information, allow the use of force by police, set prices and override existing legislation, including union contracts.

Most Ontarians are willing to have some of our Charter rights temporarily suspended during the pandemic.

We do want, however, democratic oversight of these measures.

Ford publicly argued that he needed additional powers during the pandemic. He said he couldn’t wait 3 or 4 weeks for the Legislature to be convened.

But as NDP House Leader Gilles Bisson pointed out, standing orders allow the Legislature to be recalled within 24 hours.

Instead of co-operating with the opposition, the Ford government refused to tell the opposition which bill would be discussed in the Legislature on any given day. This undermined the ability of opposition government members to prepare for debate.

In my two years as an MPP, Premier Ford has shown little regard for the democratic rights of Ontarians. Usually, the courts would be a check on this.

The Ford Conservatives, however, are showing us that our democratic rights are often built on a flimsy legal framework.

Most famously, in the summer of 2018, Ford introduced a bill to cancel four of eight Regional Chair elections. And reduced the number of seats for Toronto council from 44 to 25. It was in the middle of the campaign period.

This interference was initially overruled by the courts. So Ford used his majority to use the “notwithstanding” clause of the Charter of Rights and Freedoms.

The unprecedented use of this clause suspended the Charter rights of Ontarians. Those include freedom of thought, expression, religion, the press, and freedom from arbitrary detention. Ford used the measure just four months after being elected.

The bill did not have to go to second or third reading – the Ontario Court of Appeal overturned the initial court decision. And Toronto’s municipal election was held with only 25 council seats.

The Appeal Court judges wrote that it is not a matter of whether changing the elections rules mid-campaign “was fair or unfair.”

Because municipalities are creations of the province, the Appeal Court found that provincial governments have the right to do whatever they want.

Justice James MacPherson cast a dissenting vote. He wrote that the government’s actions “left a trail of devastation of basic democratic principles in its wake.”

The case has been appealed to the Supreme Court of Canada.

But Ford is not satisfied with rolling the dice on a legal decision that works against him.

To shore up his control over the courts, Ford has pushed through legislation which gives his government greater powers to appoint judges.

Before judges were appointed through a council process.

The Ford government has replaced that with a system where judges could be appointed for their views on controversial issues like abortion.

This summer, the government also passed legislation to suppress the rights of whistleblowers and override environmental protections.

The Ford government has made itself the arbiter of what is free speech on college and university campuses. It has passed bills that prevent the government from being sued for breach of contract. It has opened the door to corporate funding of the next campaign.

Every generation has to fight for the democracy they inherit. It should be the one issue on which all political stripes agree.

Chris Glover is NDP MPP for the riding of Spadina-Fort York.