Wassyl Slipak, the charismatic Ukrainian-born French opera singer who called himself “Myth," left his comfortable career to fight in Luhansk, where he was killed in action 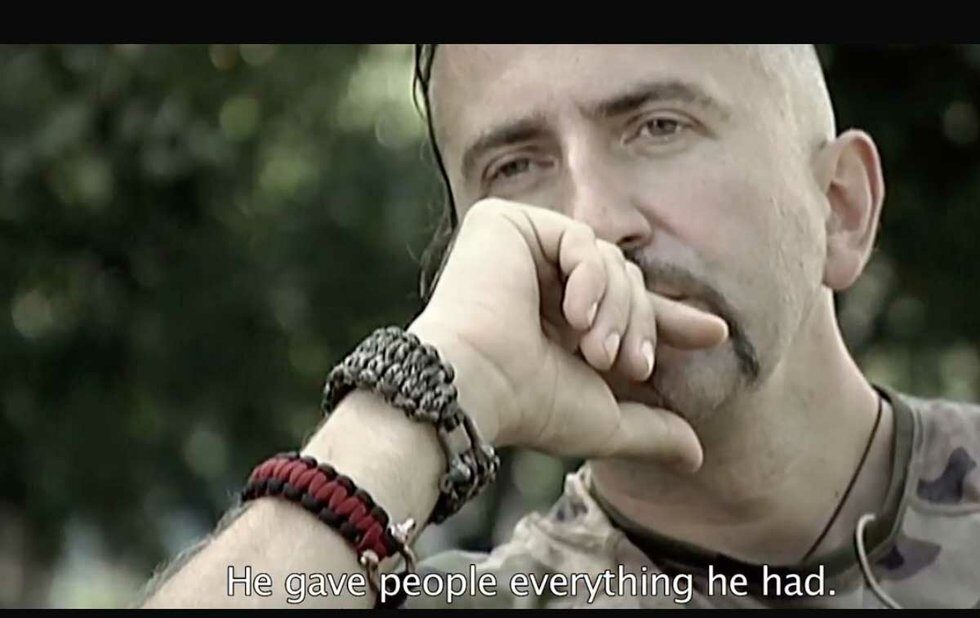 February 20 marked the fourth anniversary of the crackdown on the 2013-14 Euromaidan protests in Independence Square that left 104 dead and 2,500 injured before pro-Russian president Viktor Yanukovych fled the Ukrainian capital of Kyiv, his government dismantled.

That morning, thousands, including current president Petro Poroshenko, paid tribute to the “Heavenly Hundred” by laying flowers and candles on the cobblestones, flashing large beams of light into the sky and hanging paper angels on the trees lining the fatal alley now named in their honour. Meanwhile, Russia’s hybrid military forces mounted 12 separate attacks on army positions in eastern Ukraine, killing one person and injuring three more before day’s end.

The shelling is not an isolated event meant to send a message to those commemorating the loss of “pro-Ukrainian fascists,” as they have been dubbed by Russian propagandists. It’s the backdrop to everyday life in Eastern Ukraine since Russian president Vladimir Putin sent his “little green men” to Crimea days after Yanukovych’s exodus. Since then, Putin’s support of the separatist movement in the Donbas region has left 7,000 soldiers and 3,000 civilians dead and more than 1.8 million displaced. Aid agencies say that 4.4 million people have been directly affected by the continuing hostilities, while 3.4 million need urgent assistance.

The unprecedented need for humanitarian and military support has been partially mitigated by the increasingly important volunteer movement that has been working domestically and internationally to protect Ukraine’s borders.

One such volunteer is filmmaker Leonid Kanter, who followed guerrilla volunteer battalion Right Sector to the infamous Donetsk Airport to document the attempt to retake the strategic point from Russian forces. The critically-acclaimed “The Ukrainians” was released in 2015 and continues to be one of the most poignant studies of the volunteer movement, but his dedication to the subject did not stop there.

Soon thereafter, Kanter was introduced via Youtube to Wassyl Slipak, the charismatic Ukrainian-born French opera singer who called himself “Myth” and left his comfortable career in Paris to fight in Luhansk, where he was killed in action. For the next year, Kanter researched the “hero of Ukraine,” whom he had never met, digging up performance tapes and vacation videos and interviewing everyone who knew Slipak from his conservatory days in Lviv to his final breaths on the front line to uncover why he decided to devote himself to the fight.

After a successful tour of 32 cities in Ukraine, Kanter is bringing the film Myth, co-directed with Ivan Yasnij, to 18 cities across Canada  as part of an awareness campaign for the PTSD Family Re-Integration Program in Ukraine, run by Canadian NPO Dopomoha Ukrajini. The film has its Canadian premiere at Humber Cinemas in Toronto Wednesday (February 28).

Kanter’s compelling treatment of Myth’s persona is no straight-forward hero story. The film isn’t about one patriot’s sacrifices – Myth is actually depicted as a pretty terrible soldier. It’s about the idea, says Kanter, that ordinary people can be heroes.

“With war, we often create distance between heroes and ourselves,” says Kanter, who deftly maneuvers through the shaky landscape of memory between his protagonist and those closest to him. “But I believe that heroes are ordinary and they are among us and I wanted to explore that through Myth.”

Four years ago, during the seemingly never-ending funeral processions that saw casket after casket float out on a sea of cellphone lights on Independence Square while thousands chanted “heroes never die” in unison, Myth was in France, part of the Ukrainian ex-pat community slowly coming to the realization that he could not sing freely on European stages while his countrymen were fighting back home.

I’m not sure how much distance there actually is between hero and Myth, but I’m grateful for the opportunity to reflect on it again here in Toronto, where those chants that once rattled our eardrums and shook our perceptions of ourselves and our fates seem more distant every day.