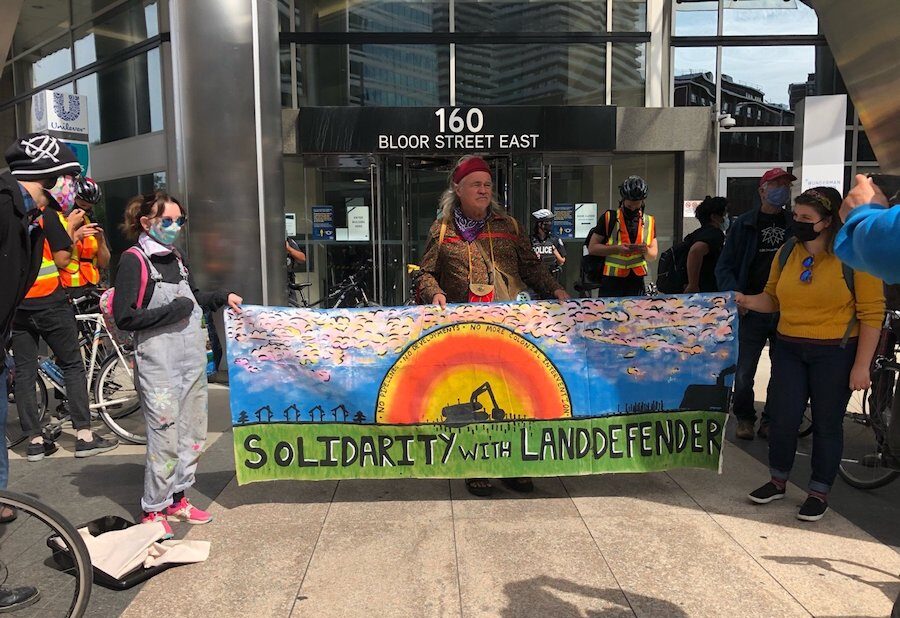 Rising Tide protestors marched on the offices of the Ministry of Indigenous Affairs on Saturday.

Hundreds of protestors gathered outside the offices of the Ontario Ministry of Indigenous Affairs in Toronto on Saturday.

The protestors were there to “call for an end to police violence and the criminalization of Six Nations Land Defenders” who have been occupying the site of proposed housing development in Caledonia since mid-July. Foxgate Developments is planning on building 218 homes on approximately 12 hectares at Mackenzie Meadows near the Six Nations reservation.

On August 5, Ontario Provincial Police removed protesters from the site. Fifteen members of the community who returned to the site were arrested this past week. A total of 26 people have been arrested, including Karl Dockstader, a journalist covering the story.

Six Nations community members say the site of the proposed development is part of the Haldimand Tract promised to the Six Nations of the Grand River in 1784 in return for their loyalty to the British during the American Revolution. They say the Canadian government unlawfully sold the reserve land in 1853.

A judge has issued two injunctions ordering protestors off the site. The most recent injunction was issued on August 25.

Subhanya Sivajothy, one of the protestors at Saturday’s action, says “community members are engaged in a traditional decision-making process” to come to a resolution.

“But the threat of violent police enforcement prevents them from solving this as a community.”

The elected band council supports the development while the hereditary chiefs on the reserve are backing protestors.

The CBC reported a fire at the home of band council chief Mark Hill last month.

Caledonia was the site of similar protests over housing development in 2006.