With an eye-popping $239 million security budget, the Pan Am Games will be the largest policing event in Toronto since the 2010 G20 Summit. Should we be worried? Seven questions answered 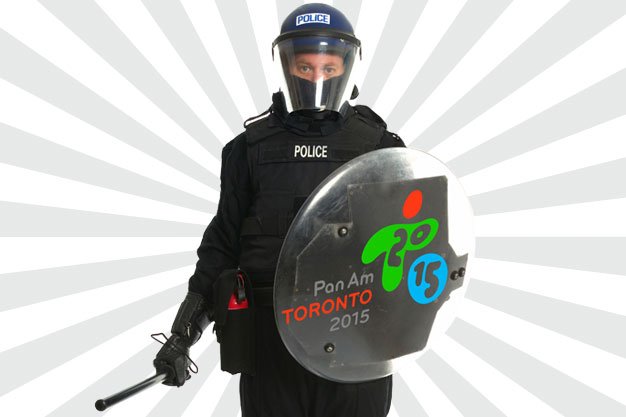 How big will the Pan Am Games really be?

With more than 7,600 athletes expected in 51 sporting events at 30 venues across 16 municipalities, the 2015 Pan Am and Parapan Am Games are larger than the 1976 Montreal Summer Olympics and more than three times bigger than the 2010 Vancouver Winter Olympics.

An Integrated Security Unit (ISU) has been formed, combining officers from the OPP, RCMP, Toronto police and seven other municipal forces. An additional 5,000 security officers have been recruited by Contemporary Security Canada, a private firm that was also contracted to provide security services at the Vancouver Olympics and the 2010 G20 Summit.

We’re hiring private cops for this?

About two-thirds of the security detail will be rent-a-cops, most of whom will have had only a few months’ experience and training. OPP spokesperson Peter Leon says private security “will perform the kinds of functions we are all used to seeing private security guards perform at major sporting events,” such as operating magnetometers and wands, conducting visual and hand searches of baggage and confirming access credentials. They won’t have police powers or carry weapons.

Games organizers are quick to say the Pan Am Games will not have the security impact of a G20 Summit or the Olympics. ISU spokesperson Constable Craig Brister says there are no plans for G20-style interdiction zones or detention centres, although “plans are scalable to the threat level.”

Perimeter fencing will surround a handful of venues, including Varsity Stadium and Back Campus fields, the stadium and tennis centre at York University and U of T Scarborough’s Aquatic Centre, Field House and modern pentathlon course, starting May 15.

The new Athletes’ Village neighbourhood in the West Don Lands will be fenced off starting this month, in part to keep people out of an active construction site and eventually for the security of athletes. The security zone is bounded by Cherry, Mill, Front and Eastern, and includes Corktown Common.

Downtown venues – Rogers Centre, Exhibition/Ontario Place, Ryerson Athletic Centre and U of T’s Varsity Stadium and back field – will all have a security presence throughout the Games period to restrict them to athletes and ticket-holders.

High Park will host marathons and road cycling, but spectators will be able to watch without tickets.

The ISU says it’s currently operating at a “medium” threat level, indicating that there have been no specific threats against the Games. “Medium” is the background level of threat in Toronto now, apparently.

Okay, but it’s still gonna be inconvenient to get around, right?

And how! Major highways through the region are going to have lanes restricted to high-occupancy vehicles (carrying three or more people) from June 29 to July 27. Brister says there will be “extensive patrolling” of these lanes, although this will focus on education rather than a “ticketing blitz.”

Cars will be blocked from Exhibition Place, and spectators are strongly encouraged to take public transit, which is free if you have a ticket for an event at the Games that day. All the marathon and road cycling events will cause street closures day-of around the west end, especially along Lake Shore. Expect the roads and public transit system to be crowded this summer.

Er, well, here’s the thing. Security operations officially begin with the opening of the Athletes’ Village June 26. Athletes start arriving July 1. Then the Games run July 10 to 26. Then there’s a short break before athletes arrive August 1 for the Parapan Am Games, running August 7 to 15. The security operation will be in effect until August 22.

But Panamania won’t be the only thing overtaking the city this summer.

Pride Toronto happens right before the Pan Am Games kick off.

The Royal York Hotel will also host major meetings of the International Economic Forum of the Americas and the Climate Summit of the Americas from July 7 to 10 to coincide with the Pan Am opening ceremonies, and Caribana happens in between the Pan Am and Parapan Am Games. Oh, the Blue Jays will also be in town. So, basically, expect Toronto to be an ongoing traffic and security nightmare from late June until September.