Recent additions to the Bloor bike lanes have led to skyrocketing use among cyclists, according to counts by cycling advocates 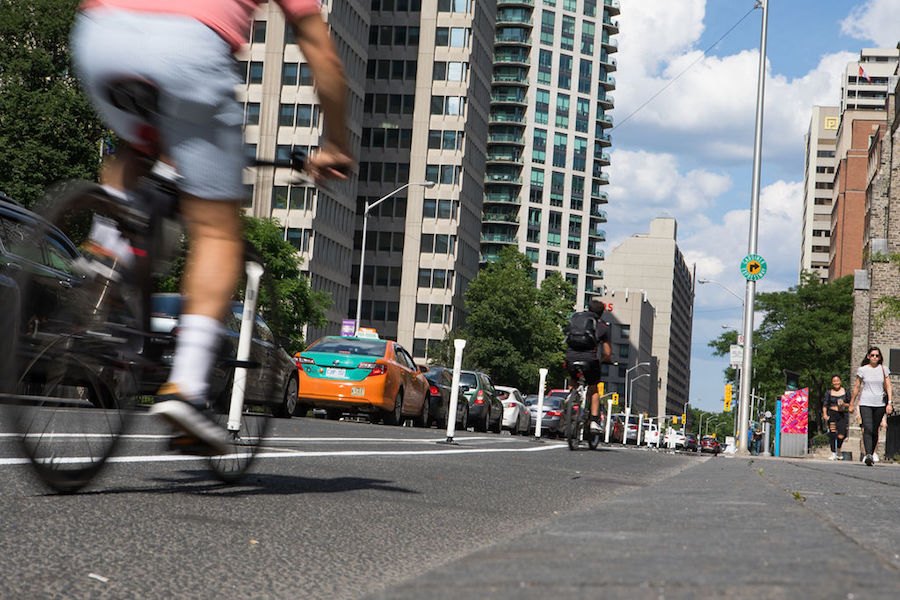 Toronto is in love with the new and improved Bloor bike lanes.

Recent additions to the bike lanes have led to skyrocketing use among cyclists. That’s according to numbers collected by Bells on Bloor, Toronto Centre Cyclists and the Toronto Community Bikeways Coalition.

The groups positioned volunteers at two locations along the route at Yorkville and Dufferin on August 19. Over a 24-hour period, they counted 4,784 cyclists at Yorkville and 4,408 at Dufferin.

The city is doing its own counts, but it’s not clear when that data will be released.

The city’s 2017 study showed a significant rise in cycling numbers shortly after a two-kilometre stretch was added from Shaw to Avenue in 2016. There were 3,309 cyclists using the route before the installation of the bike lane. That grew to 4,925 daily users.

But that increase took about one year to materialize. The city’s numbers were also taken at Clinton. Koehl points out that it’s “one of the busiest cycling neighbourhoods in the city.”

Koehl says the growth shown in the most recent numbers “already make these lanes among the busiest in the city.”

On May 28, Toronto City Council moved to fast track the city’s cycling network in response to transit issues created by the COVID crisis. The plan called for the addition of some 25 kilometres of bike lanes on Bloor, University and Danforth.

The acceleration of plans represented the single largest expansion of bike lanes in the city in one year. It also helped reverse – in the case of Bloor – decades of delays in creating an east-west link along Toronto’s busiest thoroughfare. Years of advocacy had produced approvals and plans but little in the way of actual bike lanes.

It has taken years for the pieces to fall into place on Bloor.

The Bloor Viaduct section was the first to get bike lanes. A 1.6-kilometre stretch was completed in 1991.

But the Bloor pilot (2.4 kilometres) didn’t materialize until almost three decades later in 2016. The recent extensions have added just under 10 kilometres along Danforth and Bloor

Koehl says there is a “strong push” for additional bike lanes in the Thorncliffe Park and Flemington areas of Don Mills, Keele-Weston and Bloor west to Kipling.

But cycling advocates say more can be done.

The city is some 100 kilometres short, Koehl says, of the 170 kilometres envisioned under the revised bike plan adopted by council in 2016.

Meanwhile, the debate over bike lanes on Yonge continues. There is community support, including from residents’ associations, although local politicians seem intent on studying a bike lane on Avenue Road instead.

Earlier this year, a coalition of 45 community groups, including Bells on Bloor, called for the immediate installation of 100 kilometres of bike lanes in Toronto.

The plan proposed bikeways along Bloor-Danforth from Etobicoke to Scarborough and Yonge from Steeles to the waterfront.

In an open letter to Mayor John Tory and City Council, the groups also urged the installation on bikeways on the busiest bus routes. They argued that an expanded bikeway network could serve as a “default” transit system during the COVID crisis.