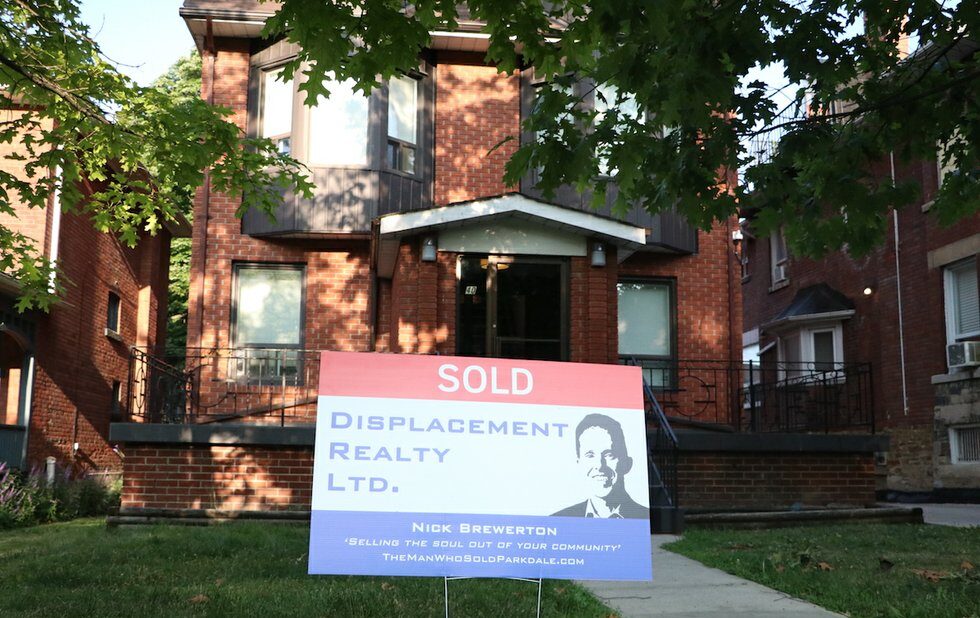 Rooming house on Spencer in Parkdale where rents for empty units have been advertised at upwards of $1,700 a month since tenants moved out.

If you’ve walked along Queen or King in Parkdale recently, you may have stumbled upon them: posters of #TheManWhoSoldParkdale.

The smiling man on the posters is Nick Brewerton, a real estate agent with Royal LePage, whom the anonymous group of Parkdale residents behind the guerrilla campaign says has been active in the sale of close to a dozen rooming houses and bachelorettes in the neighbourhood for conversion into high-end rentals. Call it “displacement realty.” A clear pattern of intimidation seems to follow, with low-income tenants getting pushed out and rents being jacked up, often doubled.

Rooming houses are the biggest source of cheap rentals in Parkdale, offering more than double the number of affordable units that public housing provides, according to the Parkdale Neighbourhood Land Trust’s 2017 rooming-house study.

While often far from ideal, rooming houses and bachelorettes in Parkdale have been homes for decades to former psychiatric patients, new immigrants to Canada, disabled folks and those with low or fixed income. But they are disappearing. 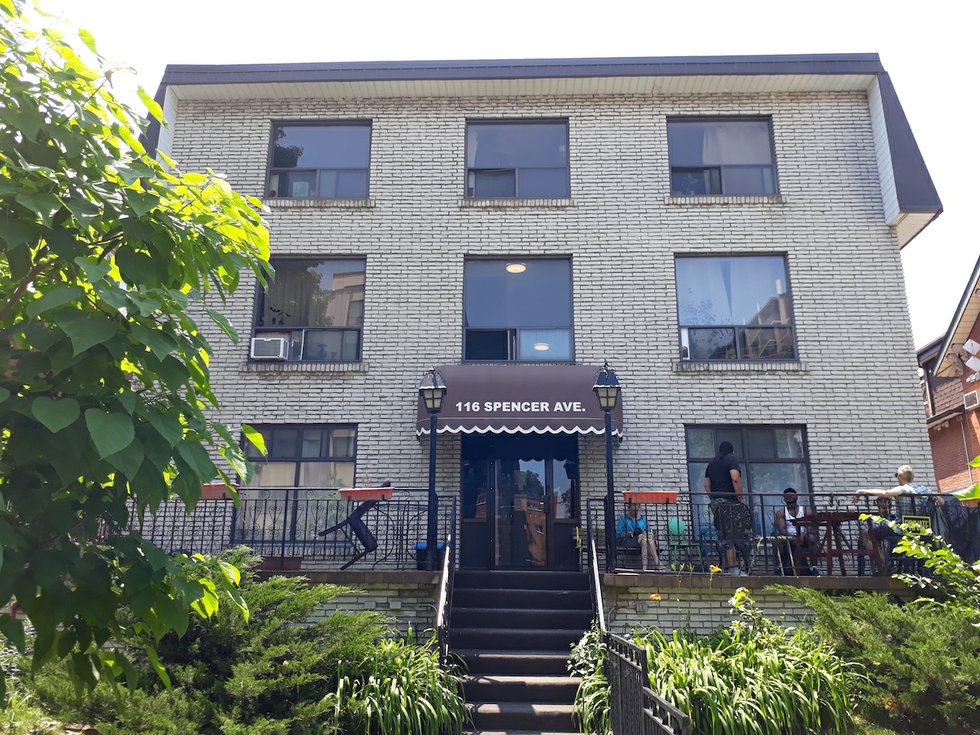 James, a tenant since 2009 at a bachelorette on Spencer that was sold by Brewerton last year, says the new landlords have stopped accepting cash payments for rent, a big issue for a lot of poorer folks because many aren’t able to get bank accounts and end up with whatever money they have through cheque cashing. Others might do odds jobs for which the are paid in cash only.

According to James, a security guard for Briarlane Rental Property Management, which now manages the building, broke up a yard sale organized by tenants on the building’s front lawn last month for no apparent reason. On two other occasions, James says, security has threatened to call police on tenants over smoking out front and once over a single beer bottle. (Briarlane has not responded to calls from NOW requesting comment.)

“We don’t know what’s going to happen one day to the next,” James says. “Our stress levels have skyrocketed.”

James started a tenants association in response to what he describes as harassment by the new owners, which he says has resulted in a drawn out and ongoing attempt to evict him. Since the building sold, he says four people have been evicted or moved out, one of them reportedly over $11 of unpaid rent. Rents for empty units have since been advertised at upwards of $1,700 per month, more than double what most of the current tenants in the building are paying.

Down the road on Elm Grove, in another building sold through Brewerton, tenant Amanda says rent in one unit jumped from $500 a $1,100 a month after a neighbour moved out.

When rooming houses are flipped, new landlords use a range of methods to push out existing tenants. If intimidation and harassment don’t work, they often rely on negligence.

With the help of Parkdale Community Legal Services, which also supported James on Spencer, the Elm Grove tenants have been able to get their maintenance requests met after getting organized.

When neglect fails to move tenants out, low-income renters are sometimes offered payouts between $2,000 to $3,500 to leave. This is big money for many long-standing tenants, but not enough to make a significant dent in the rent increase that inevitably follows losing a pre-gentrified Parkdale bachelor pad.

Most welfare and disability shelter allowances cap out at roughly $380 and $480 monthly. Between Toronto Community Housing’s multi-year waiting lists and average market rent for a one-bedroom apartment approaching $2,000, there is literally no place in Toronto to call home for most former rooming house tenants.

Rather than simply accepting this reality, some Parkdale residents have decided to resist, having seen the effectiveness of rent strikes and other tenant efforts in other neighbourhoods facing gentrification – and in Parkdale itself.

Says Alex, a neighbour of Amanda’s on Elm Grove: “Just the whole vibe of the neighbourhood – everybody was kinda on edge, worried about their living conditions. When we realized that just because it’s happening to other people doesn’t mean it can’t happen to us, that’s when we started to say, ‘Let’s get in front of it. Let’s see what we can do before it happens to us.’”

A new website, themanwhosoldparkdale.com, has just launched and aims to build on the conversations started by the postering campaign, letting tenants know their rights. With a playful, Banksy-like spirit, the goal of the site is to go beyond naming and shaming a real estate agent. Tenant organizers behind the effort want the city and province to place rent controls on vacant apartments, to remove the current financial incentive for landlords to push out low-rent tenants.

Brewerton, for his part, denies that the intermediary role he plays in the sale of properties is a factor in the displacement of low-income tenants. But he is profiting from it handsomely.

“I assist sellers who wish to sell their property and also buyers who wish to buy a property,” Brewerton writes to NOW via email. “I would have no role or ability to intervene in any situation of tenants who are being displaced, as this would be a matter between the landlord and the tenants.” 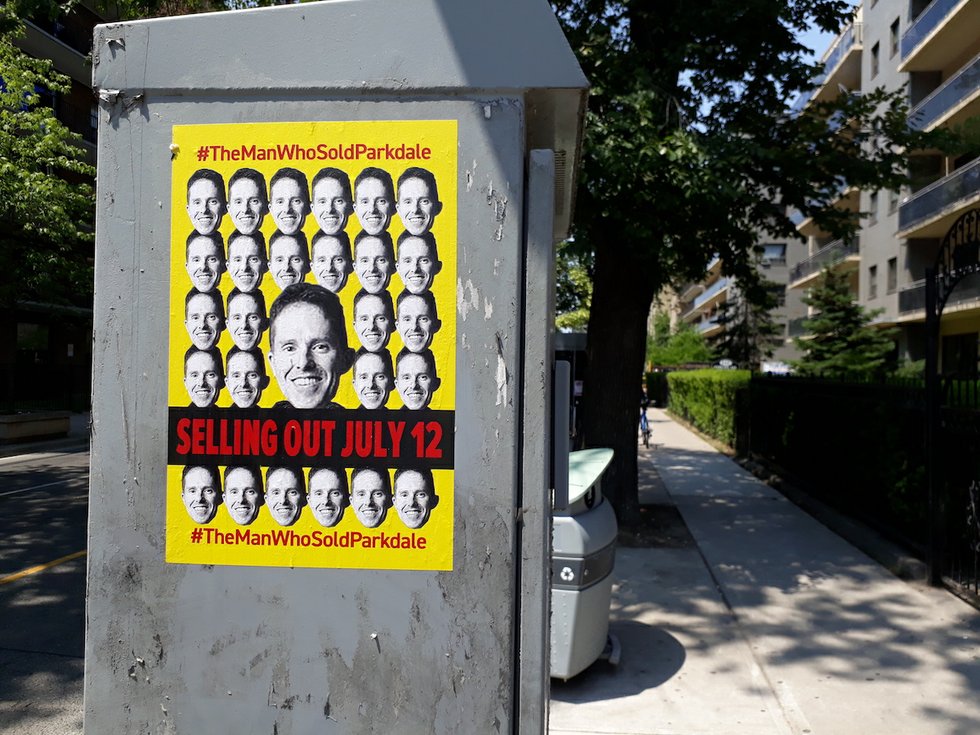 To be clear, no one individual is responsible for the decline of affordable housing in places like Parkdale.

But what #TheManWhoSoldParkdale poster campaign highlights is that gentrification doesn’t happen in a vacuum. It is not only the result of individual transactions like those of Brewerton and his clients, but the policies at all three levels of government that are either blind to or actively invested in the rising inequities in Toronto.

The posters and website may not stem the tide of displacement sweeping through the community, but it’s given some people pause and tenants a sense of resolve.

“Parkdale’s a unique place to live,” says AF, another one of Amanda’s neighbours in the building. “We all seem to get along, care about each other, help each other. We need to come together.”

Liam Barrington-Bush is an activist and author from Parkdale. Kalsang Dolma is a settlement worker and board member of Parkdale Community Legal Services.