Some 70 tenants gathered at Tim Hortons at Richmond and Sherbourne and marched to the head offices of their landlord,. 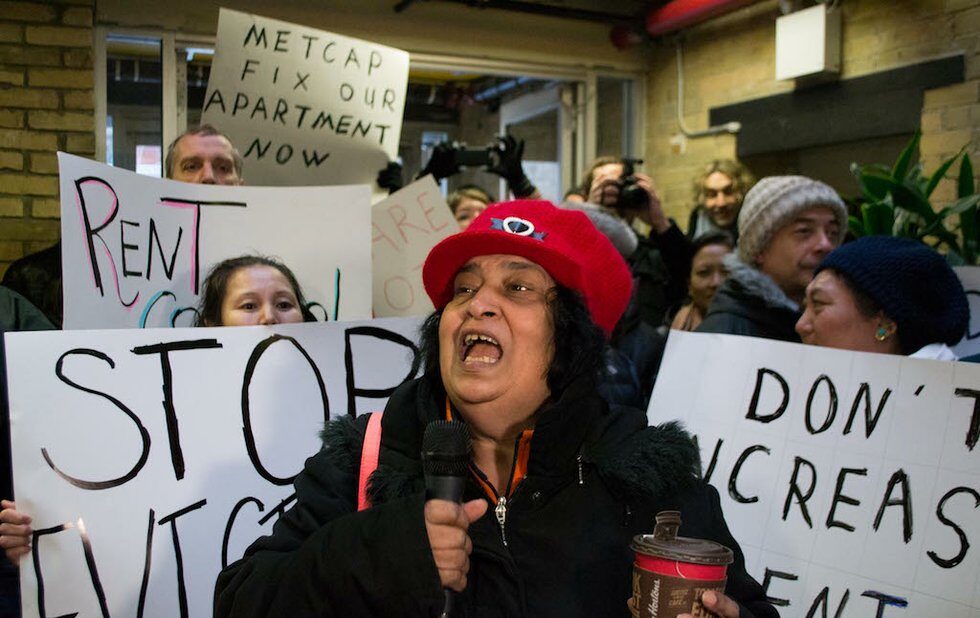 Diane Rajaram at protest at the offices of Parkdale landlord MetCap Living Inc. on Thursday

Some 70 tenants gathered at Tim Hortons at Richmond and Sherbourne and marched to the head offices of their landlord, MetCap Living Management Inc., on Thursday, March 16, to protest rent increases at a MetCap-owned building at 87 Jameson.

Tensions boiled over when protesters arrived at MetCaps cramped offices on the third floor at 260 Richmond East to find the doors locked and a security guard on duty.

One protester banged on the glass as MetCap employees on the other side filmed the crowd with their cellphones, which seemed to aggravate the protesters more.

They chanted slogans and called for MetCap CEO Brent Merrill to show his face. The frustration was palpable.

Police were called to direct the demonstrators downstairs to the lobby, where they repeated their calls for MetCap to rescind a planned 5 per cent rent increase and take action on some 100 repair and pest control requests in various MetCap-owned buildings.

Tenants at 87 Jameson have refused to pay their rent and are encouraging tenants in other MetCap-owned buildings to join them in response to what they say is the companys refusal to undertake long-overdue repairs, including properly heating their building in winter and dealing with ongoing pest control problems.

The Parkdale neighbourhood, long a landing zone for newcomers to Toronto, is in the midst of profound change. MetCap tenants say its increasingly difficult for newcomers, seniors and Millennials to find affordable rental housing in the area and are being forced to move elsewhere, changing the identity and spirit of the neighbourhood in the process. The preservation of Parkdales welcoming ethos has served as a rallying point for this tenant movement.

Among those at Thursdays protest was a cohort of Tibetan newcomers led by Tsering Lhundup.

Lhundup, who has been a MetCap tenant for six years, says the proposed rent increase would force out many tenants who are on fixed incomes or newcomers to Canada.

As refugees, we have faced so many problems, says Lhundup. Ever since we came to Canada we thought wed have stability in life. Now, because of this rent increase, we keep having physical, mental and emotional problems.

Cole Webber, a legal worker at Parkdale Community Legal Services, says the campaign in Parkdale against MetCap is growing in numbers and militancy. Parkdale tenants put MetCap on notice that they are prepared to escalate action until their demands are met.

Merrill, meanwhile, insists that buildings are well maintained. He says the company has gotten only four calls for repairs from tenants at 87 Jameson since February 2, and that only 20 calls have been received in the past 45 days from all of MetCaps properties in Parkdale combined.

The low call rate is likely due to the fact that almost all our buildings are staffed by super[intendent] couples or singles who are working hard every day to take care of our residents, says Merrill, who declined to comment on the March 16 protest.

In February, negotiations between the tenants and MetCap reached an impasse at the Landlord and Tenant Board. No future hearings are scheduled.

We have to get down and fight for our dignity and respect.”