Residents must now tread carefully along narrow sidewalks on the hilly, high-speed stretch between St. Clair West and Bloor 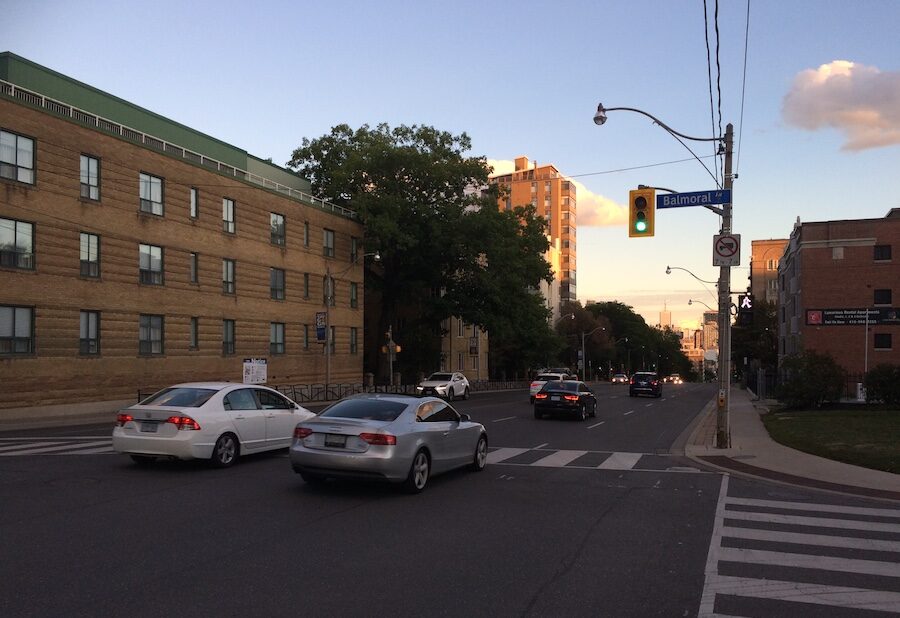 Avenue Road says a lot about our city, even if it’s no longer what we want to hear.

In September 2017, the City of Toronto’s transportation unit released a safety report that recommended a number of adjustments to Avenue Road. But it achieved little more than confirming Avenue’s primary function of moving as many cars and trucks as possible.

The report had another outcome – it motivated local schools, parents and residents groups to form the Avenue Road Safety Coalition. At a press conference last week, representatives of the group repeated – with the help of a microphone to speak over the din of the traffic – its demands for wider sidewalks and lower speed limits. The proposals are set to be debated at the Toronto and East York Community Council meeting on Thursday, October 15. It’s high time we stop allowing streets like Avenue Road to do our talking. 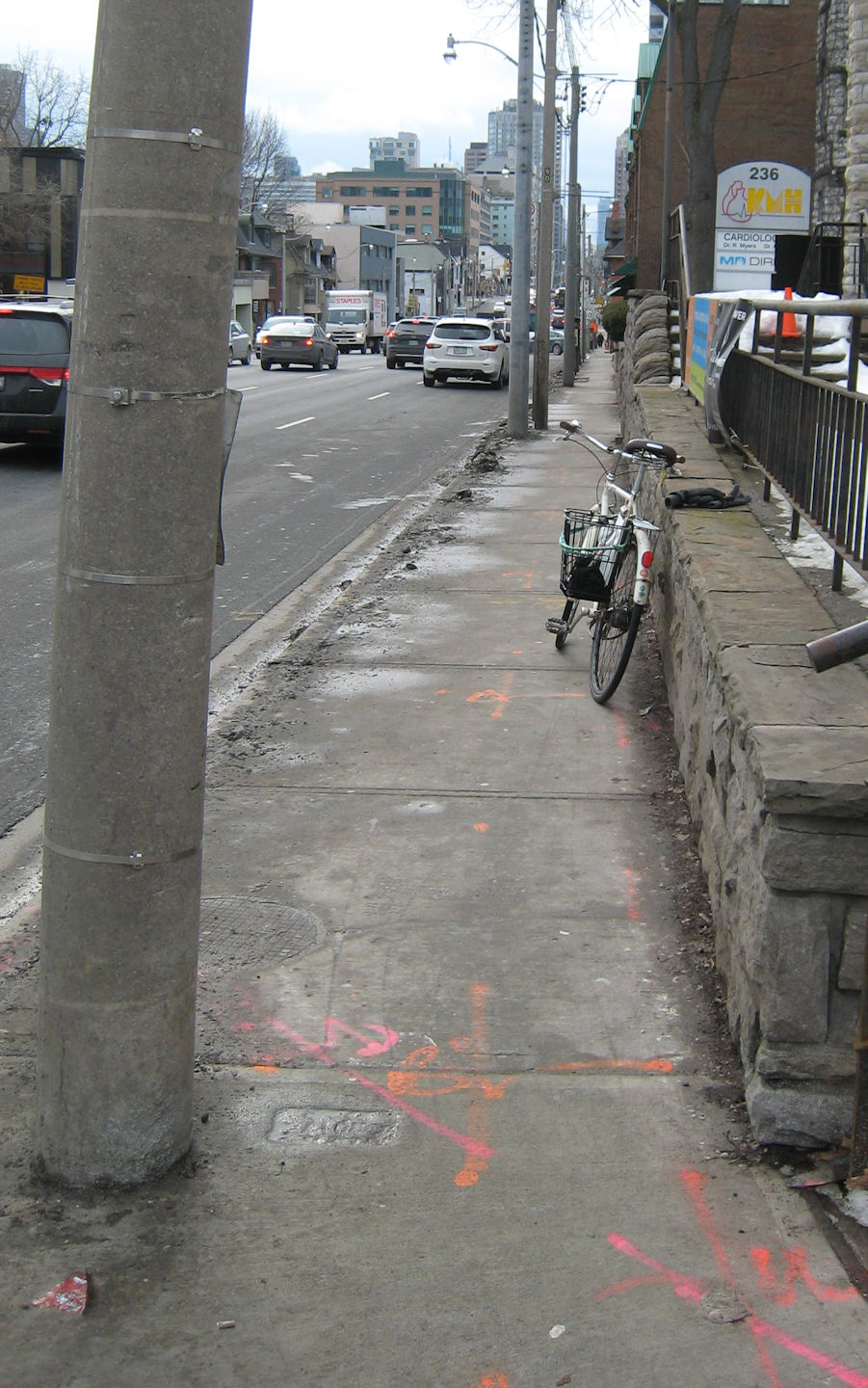 In the 1950s, the city and its suburban neighbours were in the midst of a car-buying and road-building frenzy. Avenue Road was widened. The motorcar was going to solve all our transportation problems.

Road safety wasn’t completely forgotten during the planning of the street. But those who spoke out about the design did so politely, and usually without challenging the car’s superior call on public space.

A school trustee complained in 1959 that the city had “ignored the safety of children in planning the sidewalk” on Avenue. The solution? Guardrails didn’t interfere with motorists’ space.

Today, we’re living with the consequences of those decisions; not just on Avenue Road but throughout the city, with high casualty tolls, noise and air pollution and climate-change-inducing traffic congestion. 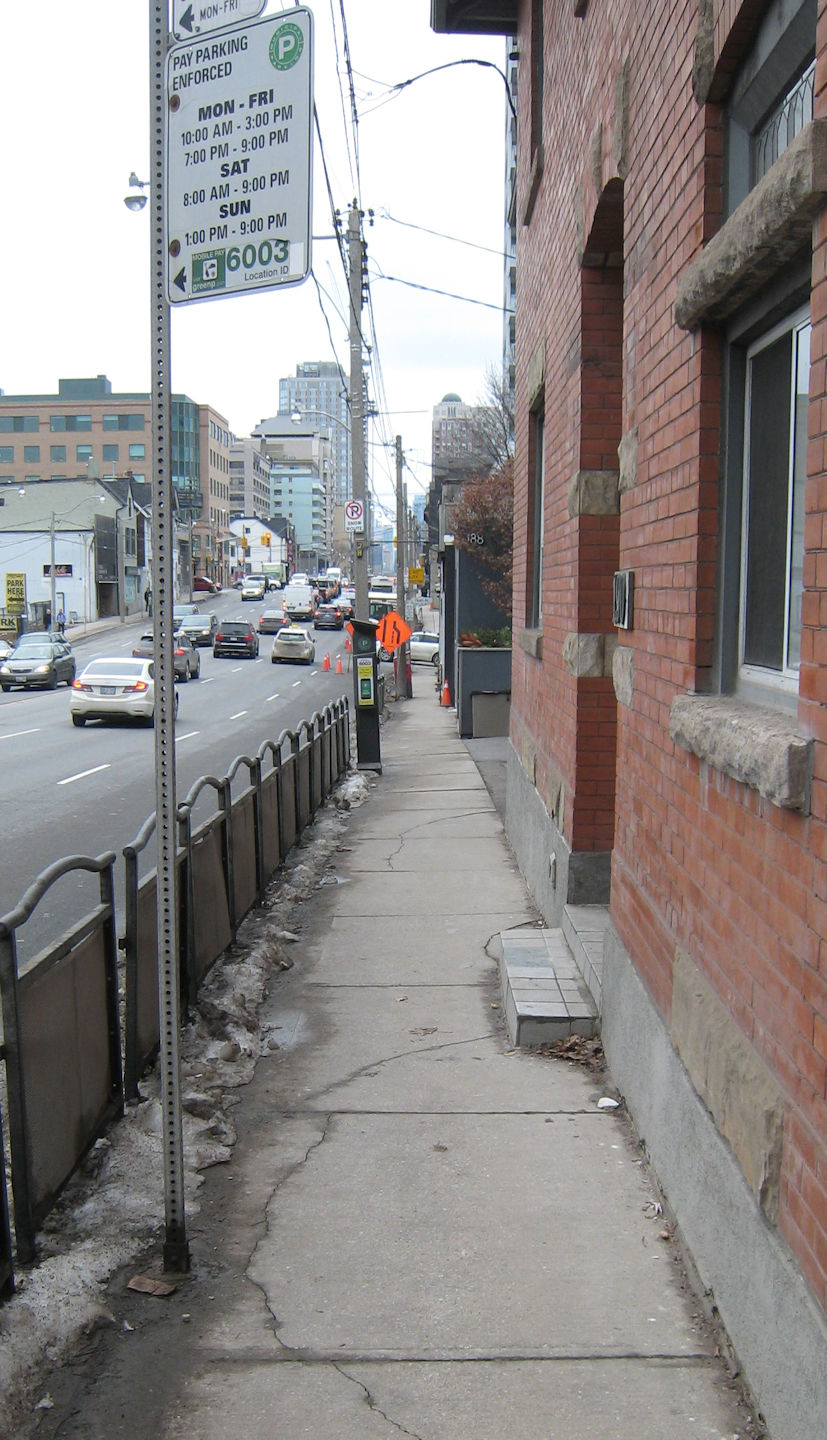 Entrenched attitudes among many planners and politicians at city hall, often hired or elected years ago, have made change difficult.

When communities ask for safety improvements that impinge on car lanes on major roads, city hall usually responds by pointing to a road’s designation as a major arterial, expecting that the supplicants will go away.

Similarly, the request may be dismissed as ill-timed given the planned schedule (often decades away) for a road’s reconstruction. If traffic lanes are to be reduced, the city points to the need for an environmental assessment before any work can be authorized. The notion of assessing the environmental impacts of reducing motor lanes should provoke uproarious laughter, but it doesn’t. 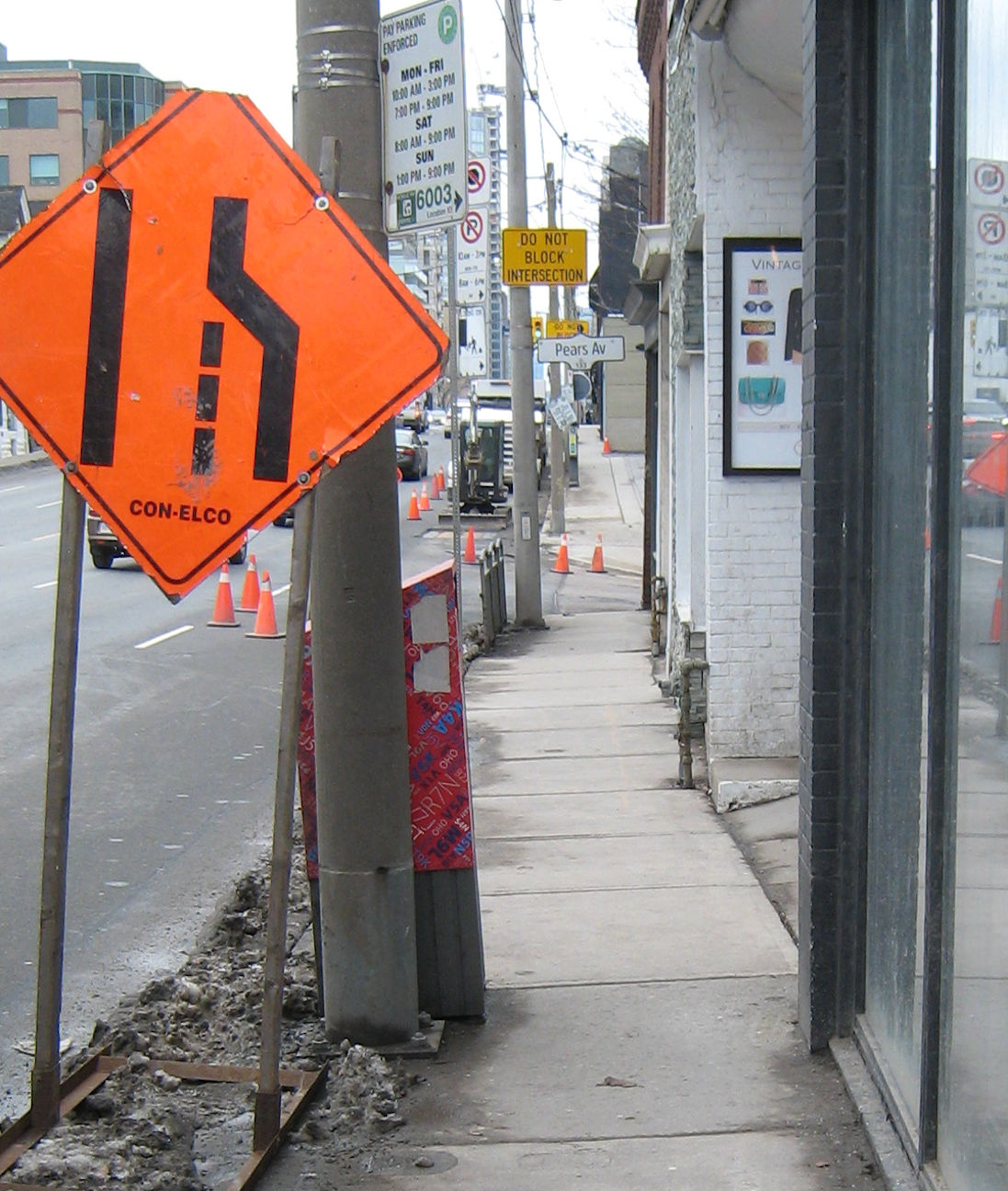 An Ekos Research poll last month reported that 85 per cent of city residents support more protections for vulnerable road users, including people who walk or cycle. This should be no surprise. In the central city, 70 per cent of people walk, cycle or take transit. Many more would follow suit if they felt safe.

When the Avenue Road Safety Coalition first made its demands for a wider sidewalk, it too got predictable responses.

The road may be a major arterial, but it’s also where people live, raise families and send their children to school. It’s where people, some in seniors’ homes, stroll to local parks and churches, and where neighbours, many in new residential towers, walk to shops or to work.

We have watched the social distancing imperative of the global pandemic motivate city hall to put aside old habits. New bike lanes and other pedestrian-friendly measures have been implemented.

They were completed using simple materials – like bollards, cement curbs and temporary installations – which allow otherwise applicable constraints to be bypassed.

On Danforth, for example, vehicle space has been reallocated for curbside cafes, bike lanes and planter boxes. This has transformed the street into the kind of place Torontonians normally visit on holidays. 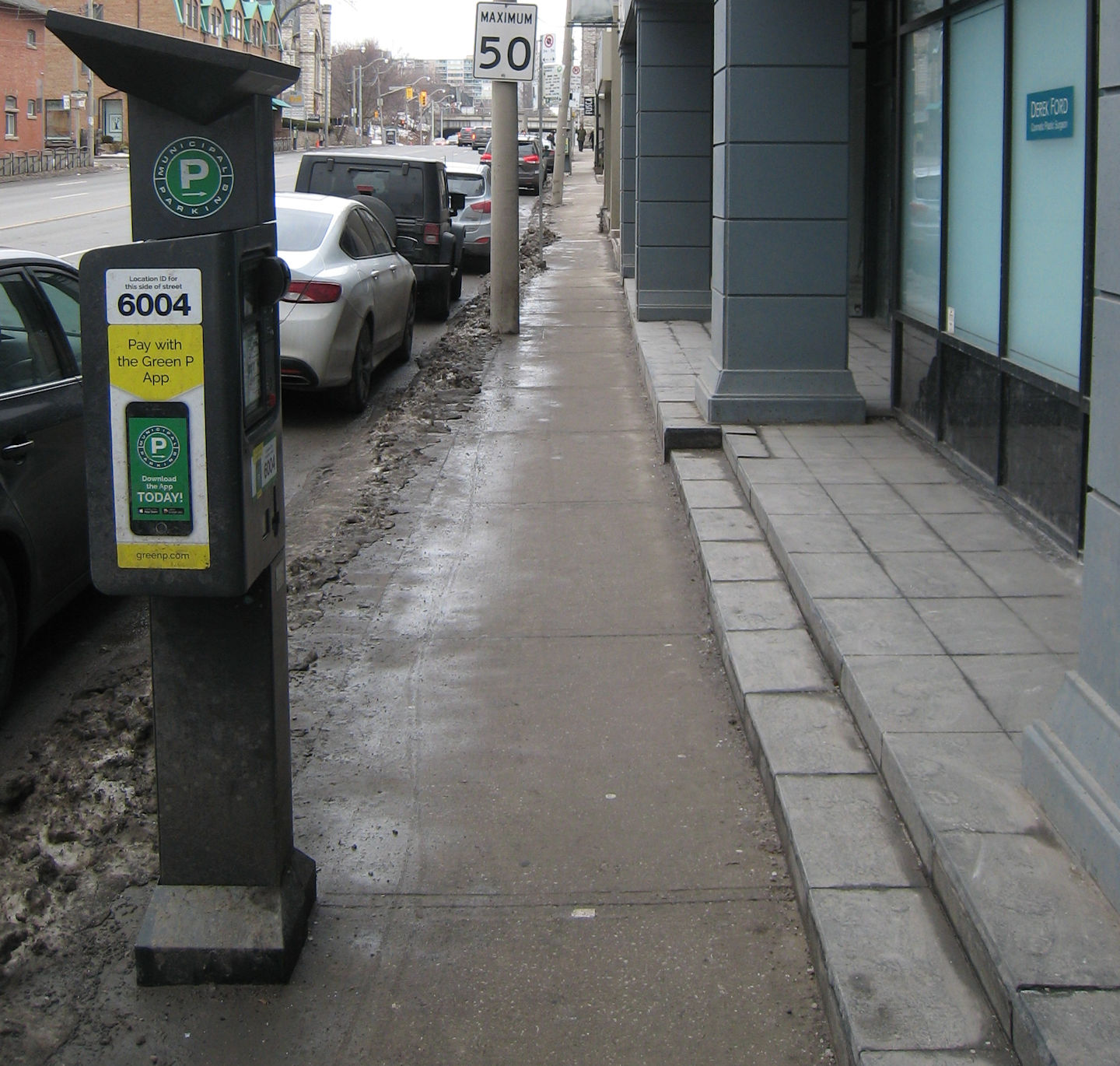 The changes to our roads prompted by the pandemic are actually consistent with Toronto’s Vision Zero Road Safety Plan. It’s premised on the notion that good road design anticipates predictable mistakes by road users. Temporary bikeways installed over the summer generally reflect such safe road design.

Another city initiative, TransformTO, also seeks to convert short trips now travelled by car to walking and cycling. A wider sidewalk on Avenue would promote walking, instead of fear.

Last year’s climate emergency declaration directs us to clean modes of travel. But city hall must now consistently take these policies from paper and apply them to our roads.

A wider sidewalk between St. Clair and Bloor would be a statement that speaks for the community, instead of outdated priorities.

Albert Koehl is an environmental lawyer and volunteer with the Avenue Road Safety Coalition.