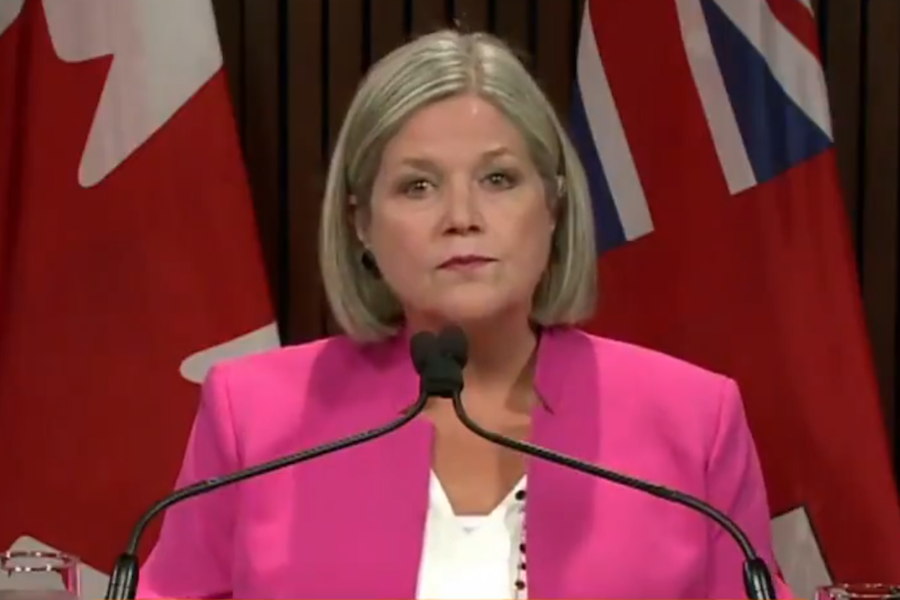 The long weekend is here, and the patios will be lovely – except for all the shouting.

Earlier this week, Ontario NDP opposition leader Andrea Horwath announced plans to draft legislation creating a “safety zone” separating restaurants and protesters, to be maintained by police and bylaw enforcement officers. On the latest episode of the NOW What podcast, we talk about what that would entail.

What is a “safety zone”?

“We completely respect people’s right to protest, people’s right to have a voice,” Horwath says. “I mean, I’ve been at [public] protests myself over the years, that’s definitely not the intent of this at all.”

Horwath sees the legislation as a public health measure. “We know that businesses have been targeted by these organized, coordinated groups who are anti-public-health during a pandemic,” she says, “What we’ve seen in terms of the footage – people who are not wearing masks, who are screaming at the top of their lungs at customers and staff at some of these establishments… every business should be able to operate without that kind of vitriolic, in-your-face harassment during a public health crisis.”

The obvious question is how such a law would be enforced, particularly since police don’t seem terribly committed to keeping order during these protests. (Toronto cops finally intervened at Agg’s Bar Vendetta last weekend, but for the most part they’ve been filmed observing the increasing agitation.)

“Well, you would have to talk to the police about what their thresholds are for the harassment levels that we’ve seen,” Horwath allows, adding that the legislation “creates a bit of a framework in terms of distancing and creating a buffer zone to prevent customers from being chased away and staff from being harassed. We would never tell the police what to do and how to enforce, but by putting the framework in place I think it adds another tool to their toolbox.”

Horwath isn’t sure the Ontario government’s announcement of an “enhanced vaccine certification system” earlier this week will do much to calm the protestors; indeed, anti-vaxxers responded to the news yesterday by swarming police stations and hospitals in cities around the province.

“I was disappointed with the announcement by Doug Ford and his team, because it’s full of holes,” she says. “We should have had something in place already; they should have been planning all summer long. [And] now we have this kind of back-of-the-napkin approach that they won’t even get us an app until the end of October, when Quebec already has theirs online. It really does show a complete lack of of urgency by the government to to solve these kinds of issues and to actually help these small businesses to get through.”

Listen to the entire conversation in the latest episode of the NOW What podcast, which also features an interview with Chantecler’s Jacob Wharton-Shukster. Available on Apple Podcasts or Spotify, or streamable right here: