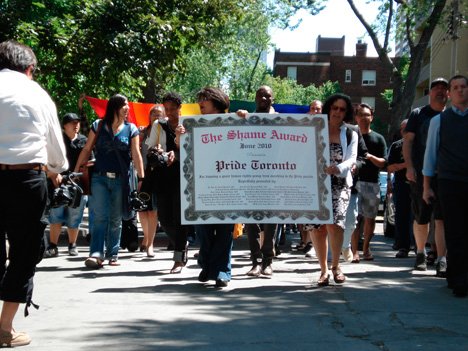 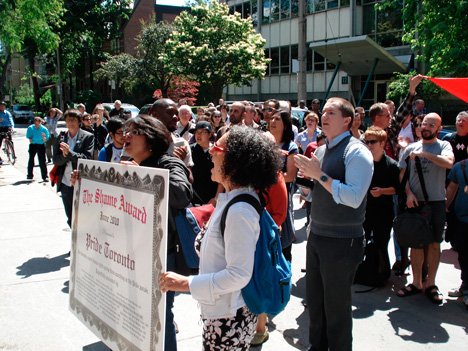 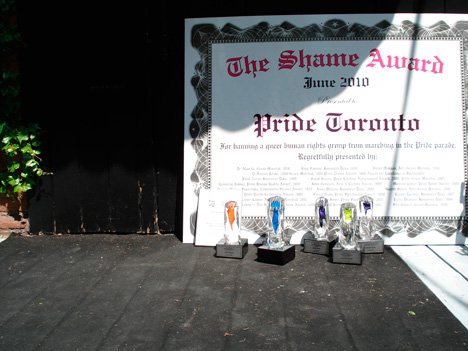 Pride Toronto got a new award on Monday. It also got some old ones back.

An assembly of 23 Pride Toronto award recipients and honourees over the past decade handed back their awards today (Monday, June 7) in protest over Pride’s recent decision to muzzle the group Queers Against Israeli Apartheid. Two weeks ago, the Pride committee banned the term “Israeli apartheid” from this year’s parade.

The award-rejecters, in turn, gave Pride Toronto its own award, made up for the occasion, the (first annual?) 2010 Shame Award, presented on a placard like an oversized cheque to Pride Toronto’s doorstep at 14 Dundonald Street.

Nobody was home at Pride’s posh headquarters to accept the award.

Pride Toronto, fearing that “Israeli apartheid” was too hot for the mainstream event to handle and that it would alienate the lords of the permits and purse strings, namely the City of Toronto and corporate sponsors, decided to go the timid route and ban the fiery words (though technically not the namesake group itself).

In a statement today, Pride Toronto laid out its position: “Our decision to restrict the use of the words ‘Israeli Apartheid’ was not made easily, independently, or absent of a commitment to respectful expression.”

“It is regrettable that some former participants of the Parade are choosing not to participate this year but we respect the difficulty of their decision.”

Each of the 15 award recipients in attendance at today’s press event had a chance to say their piece – each with a variation on the idea that they can’t be part of something that engages in censorship and exclusion.

It is notable that among the names are a handful that were to receive – but have now rejected – honours as part of Pride 2010, including Alan Li (Grand Marshal), Jane Farrow (Honoured Dyke), Gloria Careaga and Renato Sabbadini (International Grand Marshals), and Michelle Walker (Community Service Award).

The ship-jumping has also gained momentum beyond these 23 Pride luminaries. John Caffery of Kids on TV announced today he will not perform his scheduled DJ gig at Pride on July 4. “If free speech is to be taken away then it certainly is not a party I can play music for,” he wrote in a statement. Keith Cole has also quit his post as host of Alterna-Queer, and David Demchuk has abandoned his festival commitments on the Proud Voices Stage in objection to Pride’s censorship.

Of course, all this is not to say that the growing list of objectors won’t attend Pride or participate in some way. Given Pride’s significance, it’s just not that easy to walk away. It is an integral part of the queer community’s history and a symbolic turf that many are unwilling to give up. It seems Pride is still redeemable.

JP Hornick, the 2002 Grand Marshal and one of the award returnees said, “The time has come to reclaim Pride” while Anna Willats, the 2008 Honoured Dyke, echoed this underlying faith in a return to Pride’s founding principles when she spoke of “a new contract with Pride,” and the possibility of still putting on an event “that doesn’t look like the Santa Claus Parade.”

Those who turned in awards and honours: